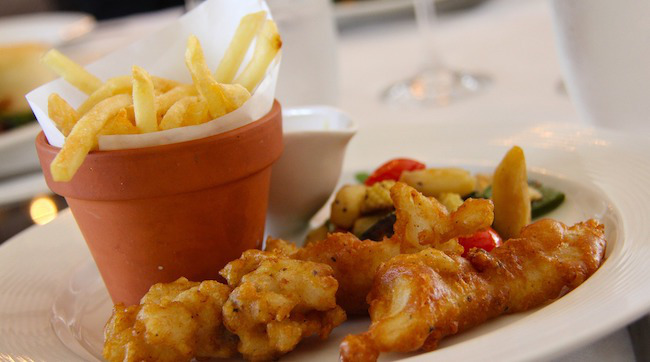 Fish & Chip On the Shoulder 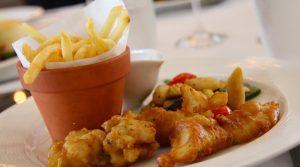 It seems that some people cannot appreciate something special. Imagine! The Jews were treated to a heavenly gift of manna, a supernatural delicacy that fell from the heavens, yet they complained about it. Not only did the manna sustain the Jewish nation during their 40-year sojourn in the desert; it had the ability to transform itself to please the palate of the most advanced culinary critic. It tasted exactly the way its eaters desired it to taste! Whether Belgian waffles with ice cream, steak, or hash browns, through mere thought the eater was able to transform the manna’s flavor into the most delicious of delicacies. Yet, the Jewish nation was still not happy. “We remember the free fish that we ate in Egypt!” (Numbers 11:5) they exclaimed. The Talmud is troubled by the words ‘free fish,’ “since when,” asks the Talmud, “was anything free in the land of slavery?” The Talmud answers that the word free, means free from mitzvos (commandments). The Jews had no mitzvos to observe during most of their exile in Egypt. They had not yet received their charge at Sinai. Therefore, they recalled the free fish that they ate during the Egyptian bondage.

The obvious question is, however, what does food — fish or manna — have to do with freedom? Why did they complain about their new responsibilities and intrinsically link it with the miraculous bread? Was it the miraculous bread that changed their status? Why did they link fish with freedom? What was it about the manna that made them feel the had a chip on their shoulders?

Little Chaim sat in the back row of his cheder. One day the Rebbe, a stern fellow who had little patience with his young charges, called upon him to recite the letters of the Aleph-Bet from a small reader. The teacher took a long stick and pointed to the letter Aleph on the page. “Vos iz Das? (What is this?)” he shouted. Chaim looked him straight in the eye, shrugged his shoulders, and said nothing.

Whack! The stick came down solidly on the boy’s hand. “I said, ‘Vos iz Das!’ ” screamed the teacher tapping his stick fiercely on the letter.

Again, Chaim jutted out his lower lip and shrugged his shoulders even higher. He spread out his hands, palms up offering his hand as a sacrifice to the dreaded stick, while intoning, ‘I have no idea what that letter is!

His offering was duly accepted, and once again, the frustrated teacher brought the stick down on poor Chaim’s hand. After futile attempts to have Chaim pronounce the Aleph, the teacher went to the next student who proceeded to recite the entire Aleph Bet flawlessly.

After class, Chaim’s friends surrounded him. “We don’t understand.” They stated in uniform amazement. “Everybody knows the letter Aleph! When the Rebbe pointed to the Aleph, why didn’t you just tell him, ‘It’s an Aleph’?”

Chaim smiled. “I’m smarter than that. Of course I knew what the letter was! But I also I knew that the moment I say ‘Aleph,’ our Rabbi would point to the Bet and ask me, ‘what is that?’ Then he’d point to the Gimmel and Dalet! Soon I’d have to recite the entire Aleph-Bet! I’d rather take a few whacks at the beginning and not have to go through the whole ordeal!”

The commentaries explain that when the Jewish people reminisced about free fish they remembered an era when they had no spiritual or moral responsibilities. The Jews understood that when one eats manna > the fare of the angels > angelic responsibility accompanies his gastronomic actions. The Jews would have rather foregone the delicacies of miraculous manna to be freed of the responsibilities it entailed. They did not want to recite even the Aleph in the knowledge that an obligation to recite the Bet and Gimmel would follow naturally.

Often in life we hesitate to begin the first step. Though that step may be simple and uncomplicated, we fear to begin treading in full awareness of the responsibilities that those first steps may lead us. Accepting responsibility is, however, the role of a people to whom the world looks for guidance.

The first bite of a new undertaking will be surely be deliciously challenging, though the second bite perhaps a little more difficult to swallow. But at the end of the meal you have will have not bitten more than you can swallow. Those who have dined on the fare of leadership and responsibility will realize that the food of accomplishment is truly more delicious than chewing over misery. The fare of leadership may even be spiritually delicious — perhaps as delicious the manna.