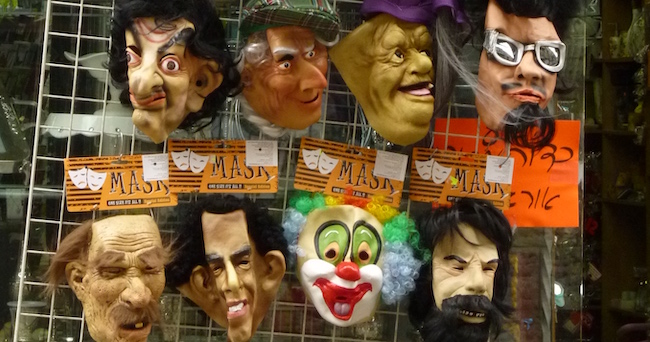 Behind the Purim Mask 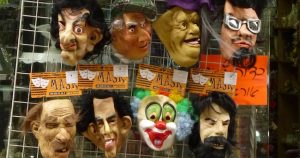 Teenage Jewish boys dressed as gorillas or past presidents dance in the streets. Younger boys wear costumes and masks identifying them as either Mordechai or Haman or Achashverosh. And of course, every little girl is dressed up in a Queen Esther masquerade. Once again we are celebrating the supremely joyous festival of Purim – but why all the masquerades?

The very name of this festival – Purim – also leads us to ask: What does this mean, and what is its significance? The Megillah tells us that the name derives from Haman’s having thrown lots, purim, to determine the fate of the Jewish people. This seems very perplexing. Why is this festival, which celebrates the miraculous deliverance of the Jewish people from the threat of total annihilation, named for a seemingly minor detail like the casting of lots?

Further on in the Megillah (9:27) we read, “The Jews upheld and accepted upon themselves, and on their offspring and all their adherents.” Our Sages infer from the words “the Jews upheld and accepted upon themselves” that “the Jews upheld what they had previously accepted.” The Jewish people had stood at Mount Sinai a thousand years before, and they had accepted the Torah directly from Hashem. But there had always been a small element of reservation in their commitment to the Torah. In the aftermath of the miracle of Purim, however, they cast all their earlier reservations to the winds and reaffirmed their acceptance of the Torah in a new spirit of love and enthusiasm. What was so significant about the miracle of Purim that it inspired such an outpouring of love for Hashem, even more so than at the spectacular revelations at Mount Sinai?

The answer lies in the very ordinariness of the miracle of Purim. There were no splitting seas, no smoking mountains, no thunder and lightning, no celestial visions or manifestations. There was only the hand of the Creator micromanaging events down to the smallest detail, manipulating the affairs of state in Persia to bring about the deliverance of His chosen people in a seemingly natural manner. The divine providence was concealed but exceedingly active and this inspired a spontaneous outpouring of love from the Jewish people. Why?

Let us consider for a moment the following two scenarios: A poor man knocks on a rich man’s door and asks for a meal. “Come in,” says the rich man. “Have a seat. You’ll have something good to eat in a few minutes.” He then calls the finest restaurant in town and orders the most expensive meal on the menu. He puts a rush on the order and tells the restaurant to charge it to American Express. Another day, the same poor man knocks on the same rich man’s door and asks for a meal once again. This time, the rich man invites him into the kitchen and asks him to take a seat. He peels fresh vegetables to make a pot of soup. He puts up a steak to broil and prepares several delicious side dishes. Then he takes out a fresh loaf of warm bread and slices it. When all the preparations are done, he places the meal in front of the poor man.

In which case does the poor man feel better, more esteemed, more loved? Without question, it is in the second case. By taking the trouble to attend to all the details himself, the rich man shows his affection and concern for the poor man. And the poor man, in turn, is inspired to feel a much stronger gratitude and affection for his benefactor.

Hashem could quite easily have sent down lightning bolts from the heavens to strike down Haman and all the other oppressors of the Jewish people. But instead, He chose to take the trouble, so to speak, of manipulating ordinary events to effect their miraculous deliverance. The Jewish people were stunned by the Creator’s display of transcendent love for His people, and in turn, they were inspired to respond with their own outpouring of love and a renewed acceptance of the Torah without any reservations whatsoever.

This is the significance of the purim, the lots. Lots represent randomness and unpredictability. They are a denial of divine providence in the smallest details of life. Haman’s denial of Hashem was manifest in his reliance on lots, and this gave him the audacity to attempt to destroy the Jewish people. But by their miraculous deliverance, the Jewish people saw the hand of Hashem in the very smallest details, and this realization was established at the heart of the celebrations for all future time.

For this reason, as well, many of the traditions of Purim symbolize concealment – the masquerades, the sweet cores of the hamantaschen. No matter how bleak things may appear on the outside, we can rest assured that underneath the hand of Hashem is guiding everything with divine wisdom and benevolence. Text Copyright © 2008 by Rabbi Naftali Reich and Torah.org.