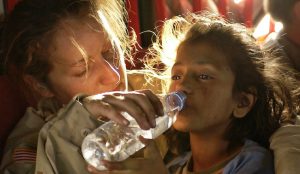 Eliezer, Abraham’s servant, embarked on his mission to the land of Haran and the house of Besuel to find a wife for his master’s beloved son, Isaac. As kindness to others was the hallmark of Abraham’s life, Eliezer hoped to find a young woman who excelled in this same way.

Upon arriving in Haran, he stopped at a well to drink and water his camels. He prayed for G-d’s assistance and a sign, saying, “The maiden whom I ask, ‘Please tip over your jug for me to drink’ and replies, ‘Drink, and I will also water your camels,’ let me know through her that she is the one You have shown is for Your servant, Isaac.”

Just as he finished his petition, Besuel’s daughter Rebecca came to the well to fill her jug with water. Eliezer ran to her and put his plan into action. Just as he had hoped, she complied with his wish, and offered to draw more water for the camels.

Then, once the camels had finished drinking, Eliezer presented the jewelry he had brought along as gifts for Isaac’s bride, and then asked her about her family. Once he heard that she was Besuel’s daughter, and she offered him a place to stay and straw for his camels, Eliezer prostrated himself before G-d. He knew his prayers had been answered.

But one must ask: what happened while the camels were drinking? They store water, enabling them to make long trips across the desert — and it takes them a long time to fill the tank. Isn’t it strange that Eliezer waited for them to finish drinking, before giving the gifts to Rebecca and continuing the conversation? Wasn’t he already anxious to know who she was? What was he waiting for, if she had already been, quite literally, the answer to his prayers?

During the time the camels were drinking, Eliezer was observing, not standing idly. He took note that Rebecca did not ask Eliezer for any sort of compensation, or even a “Thank you!” She filled Eliezer’s wishes, and more, but did not expect even his gratitude in return.

This ability to do a Chesed (good deeds) with no desire for recognition was what “clinched the deal” for Eliezer. Rebecca showed that her care for others was real, without ulterior motives. A girl of such stellar character was fitting for Abraham’s family. (Based on the Seforno Commentary)

We often extend ourselves to others, and they don’t always appreciate our efforts on their behalf. That lack of thanks can be annoying, even painful. However, those are opportune moments when we can think to ourselves, “I help others because this is the right thing to do, not to be honored for it. It’s what G-d wants me to do.” A person able to show kindness without reward demonstrates a quality befitting Abraham’s own house.