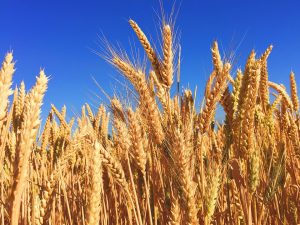 On the second day of Pesach, there was a special meal-offering of barley brought to the Temple taken from the freshly-cut first harvest of the year. This was called the Omer (Vayikra 23:9-14).

This nondescript offering (its name “Omer” was so-called after the exact measure to this meal-offering), was highly significant insofar as this offering was the precursor to eating any grain produce of the new crop in the Land of Israel.

Historically, the first time this offering was brought was in the aftermath of Moshe’s death upon the Children of Israel entering the Holy Land. Their earlier sustenance from heaven, in the form of the miraculous Mon, manna, lasted up and until the day after which Yehoshua organized the first Omer offering. (See Yehoshua 5:12).

For close to 40 years in the wilderness, each Jew had been the recipient of a daily quota of Mon, to the amount of one Omer measure per head (Shemos 16:16). Now, explains the Midrash, the chosen nation’s entry into their homeland saw them instructed to reciprocate. They were to present G- d with a communal offering of one Omer of barley (Vayikra Rabbah 28:3).

The Omer of the Mon and Omer offering are linked because they carry the same message.

Whether our Omer of food miraculously descended from the heaven straight to our doorsteps or whether it was gained through the toil of the earth is inconsequential. What was vital was to note how all prosperity and success emanates from the same divine source.

It makes no difference if the arrival of our food is miraculous or natural. The bottom line and timeless teaching is for a Jew to always see G-d’s Hand manifest in all of his affairs. And it is the Omer offering, taken from the natural agricultural produce of the earth, which celebrates the continuity of divine providence at all times. This was especially the case in the dramatic transfer from the Israelites’ food source in the wilderness and that of the Holy Land.

The ability to merit G-d’s blessing and His abundance hinges upon man’s ability to become a recipient of His goodness. In answer to the question if the world remains within G-d’s remit or if the “Earth was given to man” (Tehillim 115:16), the Talmud notes that both are true. The distinction lies “before” and “after” the recitation of a Bracha, blessing. To derive pleasure without conceding its holy Source is likened to a thief robbing divine property. Only after making a benediction to declare its heavenly origins can man acquire it for himself (Berachos 35a).

Thus, the Omer offering is comparable to a Bracha preceding enjoyment of this world’s crops as it, too, is the prerequisite to anyone partaking of the new crop and produce in the fields.

That the Omer offering attests to also seeing G-d in the covert natural setting explains how Haman’s downfall was specifically on 16 th day of Nissan – the day the Omer offering was brought (Megillah 16a). This is not a coincidence. Haman himself admitted to Mordechai’s students that the Omer negated his 10,000 pieces of silver presented to Achashverosh to kill the Jews (Vayikra Rabbah 28:6). Seeing G-d operating using the veil of nature is the major theme of the Purim story. It is something like the Omer that is the weaponry to defeat the Amalekite ideology that audaciously challenges divine providence within creation (Michtav MiEliyahu, 2 p.25).

It is essential that in all our activities in the pursuit of a livelihood, we take the symbolism of the Omer offering to heart. Prior to enjoying and partaking of the good, we acquire this only after we proclaim G-d as the Source of our continuous blessing and success. Text Copyright © 2007 by Rabbi Osher Chaim Levene and Torah.org.