Parshas Yisro – Waking Up Your Parents 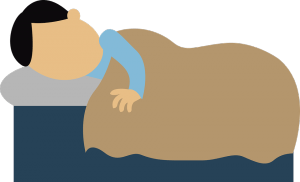 The doorbell rang at the Levine’s home.

Penina answered the door and saw their mailman with a package and clipboard.

“Good afternoon,” said the mailman, “I have a package here for Mr. Levine.”

“Thank you,” said Penina, reaching for the package, “This must be his new passport. He needs it for his trip next week.”

“I’m sorry, but this package is from the government and requires a signature of Mr. Levine before I can give it to you,” explained the mailman.

“Oh no. He’s upstairs asleep, do I really have to wake him up? Can’t I sign for it instead?”

“No, the law states that only he can sign for it.”

She began walking up the stairs to her father’s bedroom and suddenly remembered a story from the Gemara that seemed very similar. She stopped and thought to herself “Am I allowed to wake my father up?”.

A: The fifth commandment of the aseret hadibrot is kibud av v’ em, to honour one’s parents.

Q:What story in the Gemara was Penina thinking of?

A: At the time of the Beis Mikdash the stone of sheves Binyamin, the yashphe, was lost from the choshen of the Kohen Gadol. Another yashphe stone was needed. A non-Jewish man named Dama Ben Nitina had one, and the chachamim came to his home to purchase it. They were willing to pay Dama huge sums of money, but he refused because the stone was lying under his father, and he did not want to wake him up (Kidushin 31a).

Q: What should Penina do?

A: There are some important differences between Penina’s situation and Dama’s. Damah knew that his father did not want to be woken up under any circumstance. Also, the loss of money for the gem was a loss for Damah and not for his father. In Penina’s case her father would suffer a loss if she did not wake him. Her father also did not say that he did not want to be woken under any circumstance. For these reasons Penina should wake up her father. Note that although she is allowed to wake her father up, it would be better if Penina’s father would be woken up by someone other than his own child, if possible (Aruch HaShulchan 240:40; Sefer Mora Horim u’Chvodam 1:28).

Q: What if Penina realized that her father was napping too long and would miss his time to say minchah? Should she wake him up?

A: Yes, Penina can assume that her father would want to be woken for the purpose of performing a mitzvah (Sefer Mora Horim u’Chvodam 1:28).

(Written by Josh and Tammy Kruger, in collaboration with Rabbi Yehoshua Pfeffer, and based on his article entitled “Kibbud u’Mora Av ve’Eim: Honoring and Fearing One’s Parents”)