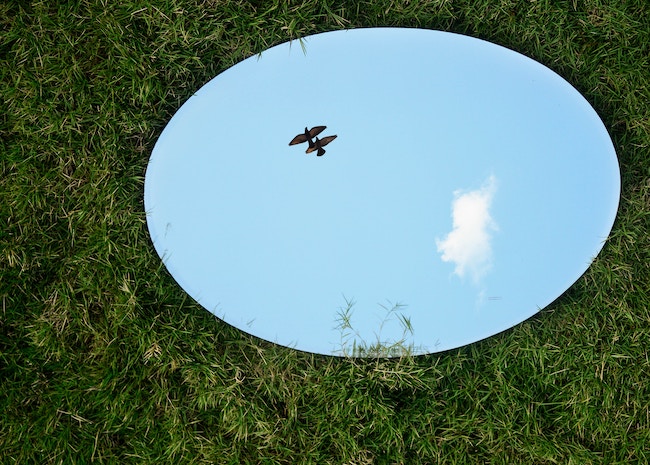 The Great Mirror in the Sky 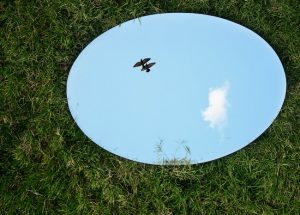 In this week’s parsha of B’sahlach, the Bnei Yisroel (children of Israel) safely passed through the Yam Suf (Sea of Reeds), after which, it came crashing down upon the Mitzrim (Egyptians). Moshe then led Bnei Yisroel in the “Az yashir (15:1)” – the song of redemption.

“Nachisa v’chasd’cha am zu ga’alta (15:13)” – You (Hashem) have led, with your kindness, this nation that you have redeemed. The Psikta states: “nachisa v’chasd’cha” – this refers to acts of kindness. Which and whose kindness is this referring to?

The Chofetz Chaim quotes the Medrash that tells of a strategy meeting which took place in Mitzraim. The Bnei Yisroel saw that Paroah’s decrees were getting increasingly harsh and there seemed to be no way out of it. They met and agreed to perform acts of generous kindness to one another. This, they hoped, would spark a similar response from the heavens, thereby causing Paroah’s decrees to ease. It was this comradery and these acts of kindness which ultimately brought the redemption.

That is the meaning of the Psikta. It was our acts of kindness which caused Hashem to “nachisa v’chasd’cha” – to lead us with His kindness.

There is a story related in Hasidic Tales of the Holocaust of a group who were first taken into a Hungarian labor battalion. Years later, upon being returned to Hungary, they were sent to Borenhauser, a German concentration camp. Selections became a fact of life – or death. With the deteriorating conditions it became obvious that fewer and fewer of the original group would pass the next selection.

Twenty five men were very ill. Despite the help and care from their fellow inmates, they were in such a deteriorated state that all hope of saving them was lost. However, a German S.S. man was very moved by the friendship, comradery and care among the men. He took the twenty five sick inmates and marched them to a hill, pretending that they were urgently needed to dig foxholes. Meanwhile, the selection took place at the camp below.

We were created as essentially ‘needing’ beings. This was to allow us to develop ourselves through helping one another, thereby becoming worthy and appreciative of Hashem’s help to us. The heavens serve as a great reflector. The way that we treat others determines the fate which will befall us.

With this concept the Chofetz Chaim explains the blessing of ‘Boray Nefashos’ (one of the blessings recited after eating). “Boray nefashos rabbos v’chesronan” – You have created many, many people with that which they are lacking… “L’hachayos ba’hem nefesh kol chai” – To give life, through them, to all who are alive. One attains life through helping others. The great mirror in the sky…

The Talmud (Bava Kama 50B) relates an incident of a person clearing the stones from his field by throwing them onto the nearby street. A passerby censured him by asking him why he’s throwing stones from property that isn’t his onto property that is his. He laughed at the seeming silliness of the statement and continued to clear his field.

Some time later, after poverty had forced him to sell his field, he was walking along the road adjacent to that field. Tripping on one of the rocks that he himself had thrown onto the road, he understood the words of censure that he had then ignored. Our ownership of private property can be very fleeting. Only public domain is ‘ours’. He had thrown from property that wasn’t his onto property that was his. The great mirror in the sky reflecting acts big and small.

We sometimes get too focused on the ‘biggies’, ignoring the power and significance of the ‘smaller’ acts. The story is told of a visiting person walking along the beach of an island, enjoying the breathtaking beauty. In the distance he sees a person who seems to be walking in a very strange manner. As he draws closer, he sees that the person is bending down, picking something up and throwing it. He does this every few steps. As he gets even closer, he realizes that it’s a native of the island, picking up starfish and throwing them into the ocean.

“Hello friend, can I ask what you are doing?”, he inquires.

“Well, these here starfish got caught on the beach when the tide shifted and they’ll die stranded here. I’m throwing them back into the ocean to save their lives.”

“Are you serious?! Don’t even bother! Don’t you know that there are hundreds of miles of beaches here with millions of starfish washed up on them. How many can you hope to save compared to the millions that will die?! Why are you wasting your time? What kind of a difference can you really make?”

The native smiled, bent down, picked up another starfish and threw it into the welcoming waters of the ocean. “Sure made a difference for that one.”

An issue that is often misunderstood is the complaining of Bnei Yisroel during the travels through the midbar (wilderness). Upon leaving the area of Yam Suf, they traveled to Midbar Shur. “And they went three days in the wilderness and didn’t find water. They came to Marah and were unable to drink from the waters because they were bitter… And they complained to Moshe saying: ‘mah nishteh?’ – what will we drink?. Hashem showed Moshe a tree, he threw it into the water and the water became sweetened (15:22-25).”

We tend to bring others down to our level. If we’d have certain intentions while performing an act, it’s difficult to recognize and attribute different intentions to others. We view and understand the world through our perceptions, our prejudices and our interpretations. We can be compared to a toddler who was unceremoniously locked out of the bathroom after attempting to drink the eau de toilet’. When seeing his parents entering the bathroom and locking the door behind them, he’s filled with a devastating feeling of injustice. How come they can drink that water and I can’t?!

Let’s try to understand the complaints of a nation on the level of Bnei Yisroel. After having seen with their very own eyes the miraculous Hand of Hashem and after having collectively reached one of the highest levels of prophecy, what was troubling them?

Rav Isaac Sher of Slabodke explains that traveling three days without water didn’t cause them to complain. They felt no need to drink! They were on the level of angels! They were drawing their sustenance from the ‘ziv haShechinah’ – the glow of Hashem’s Presence. Upon arriving in Marah, upon hearing that there was water to drink and finding it bitter, they asked “mah nishteh?”. Meaning, who needs to drink… who wants to drink… If we can be on the level of angels who have no need for physical consumption, why sully ourselves with bitter water!

Hashem showed Moshe a tree which he threw into the water thereby sweetening it. Your purpose in this world is to be people! To live a physical existence and to sanctify it. To deal with the tests of the flesh and to overcome them. To transform the earthly into the heavenly. To transform darkness into light. To transform bitter into sweet. Moshe was instructed to throw the tree into the water.

We begin the Kedusha prayer by saying: “Let us sanctify Your Name in the world in the same way that it is sanctified (by the angels) at the heights of heaven…”. Isn’t it somewhat audacious for us to try to sanctify the Name of Hashem in the same way as the angels? On the same level as the angels? We, who are steeped in this physical world with all of its allures. Ridiculous. Chutzpah! The truth is – Heaven forbid that we’d do it on the same level of the angels! We do it on a much higher level! For a purely spiritual being to recognize Hashem and proclaim His Glory is no feat at all. If we’d see Hashem before our eyes as they do, we’d scream Kadosh! Kadosh! Kadosh! – Holy! Holy! Holy!. But when we, with our perception clouded by the illusions of this physical world, with our minds concerned with obtaining ‘water’ for ourselves and our families, when we pronounce Kadosh, Kadosh, Kadosh…, we are reaching a level that angels can’t even comprehend.

This was the ‘complaint’ of Bnei Yisroel. A degree of confusion about their mission. Hashem had Moshe instruct them. Throw the tree into the bitter water. Transform the world. Transform your selves. Understand the type of nation that you must become. A fusion of the physical and the spiritual. As Moshe was an “Ish Elokim” – a man of G-d, we must become an “Am Hashem” – a nation of G-d. The fulfillment of the prophetic vision that Yaakov Avinu had seen. The ladder stood on the ground and its head reached the heavens. A nation whose head soars to the heights of heaven as their feet dance on this earth.