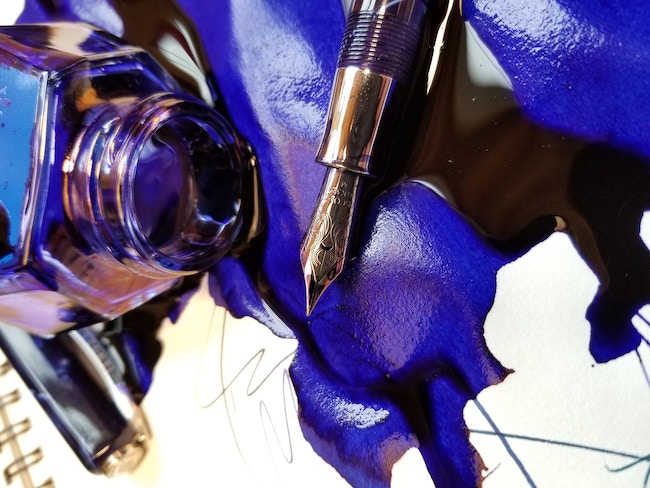 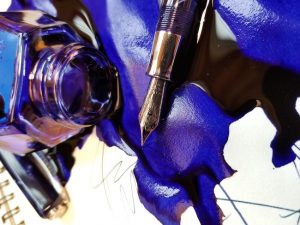 This week we read the parsha of Ki Tiso. It contains, amongst many other topics, Hashem giving Moshe the luchos/t (tablets), the cheit ha’egel (sin of the golden calf), the subsequent breaking of the luchos/t and the giving of the second luchos/t.

“Va’y’hee b’redess/t Moshe me’Har Sinai (And it was when Moshe descended from Mount Sinai) u’shnei luchos/t ha’edus/t b’yad Moshe (with the two tablets of testimony in his hand) … U’Moshe lo yada ki keren ohr panav (And Moshe didn’t know that there was a beam of light emanating from his face) [34:29].”

In order to understand the concept of this extra ink and how it relates to us, we must first understand the difference between the first and second luchos/t.

When Moshe came close to the encampment with the first luchos/t he saw the letters flying off. The luchos/t suddenly became very ‘heavy’ and they smashed to the ground. The Beis HaLevi explains that the first .luchos/t contained in (hinted) written form all of the Torah’s pasukim (verses), the Mishna and the Talmud including every question that would be asked on it and every answer. If we would not be going into galus/t (exile) and there would be no danger of it falling into the hands of the gentiles, then there was no need for an Oral Law. It all could be included in the Written Law.

With the cheit ha’egel, the course of history changed drastically. We would need trials and tribulations to correct the sin’s effect on us in order to return to that original level. We would now need galus/t. The entire Torah could no longer be in a vulnerable, written form. Part would be written and the rest would be transmitted orally.

That which had been written and now needed to be oral, those letters came flying off. All that remained in Moshe’s hands was the written Torah. What are t’filin (phylacteries)? What do they contain? How are they written? What are they placed in? What are tziztis/t (strings worn on four-cornered garments)? How are they made? When must they be worn? The Written Law without the Oral Law was incomprehensible. Unmaintainable. Unwieldy. It couldn’t be held. It was too heavy. The luchos/t smashed to the ground.

For the next forty days Moshe prayed to Hashem to give the Torah a second time. Hashem agreed and Moshe again ascended Mount Sinai, this time to receive the second luchos/t. The first luchos/t had contained the entire Torah. It was a complete, self-sufficient entity. We Bnei Yisroel (children of Israel) played the role of the vessel into which the Torah was placed, as we place the Torah into the Ark. With the second luchos/t our role changed drastically. We became the klaff (parchment) upon which the Oral Law was ‘written’. Just as the klaff and the letters together form the Written Law, we and the teachings together formed the Oral Law.

Each person, according to the effort invested, merits their share of the Oral Law. Only Moshe absorbed all that was humanly possible. The entire Oral Law had originally been written on the first luchos/t. It was not going to be written on the second luchos/t. There was ‘leftover ink’! Where was it now going to be written? On Moshe’s mind! He became the parchment with all of its holiness. A beam of light emanated from his face. The leftover ink.

No longer the guardians of the Torah but the bearers and wearers of the Torah. Each individual’s glow is the sum result of the effort he puts in.

This past week, Rav Boruch Chait and his guitar visited the Yeshiva for some pre-Purim songs and thoughts. He told of a builder who was just starting his career. He had decided that the formula for success was to build his first house cutting no corners (sorry). He would get a reputation of being a quality builder and much business was sure to follow.

A wealthy uncle decided to help out his favorite nephew and hired him to build a house. $10,000 would be paid weekly to cover all expenses. Any leftover money would be salary. Upon completion of the house, the keys would be handed to the uncle and final finances would be squared away.

The nephew began his first job filled with vigor and excitement. Only top quality products were used and it was clearly off to a ‘Grade A’ beginning. After many weeks of hard work it was time to install the piping for plumbing. At the warehouse he couldn’t help noticing from the corner of his eye that he’d save 25% by purchasing ‘Grade B’ pipes. Rationalizing that it wouldn’t make that much of a difference he made the purchase pocketing the extra $2,500. A few weeks later he was ready for the electrical work. This time he noticed that he could save 50% if he’d buy the ‘Grade C’ wires. Giving it much less thought than he had with the plumbing, he made the purchase, this time pocketing a cool $5,000. He continued with the building until he had reached one of the final stages. As he went to buy floor and wall tiles he was thinking of how much money he could possibly save. The salesman directed him to the poorest quality materials and he bought them, saving a whopping $7,000.

The day had arrived. With the house completed, he’d hand the keys to his uncle, receive his final payment and get out of there before any sparks began to fly. His uncle appeared very appreciative for the (seemingly) quality work he had done. With a warm, loving look, his uncle settled the difference and handed him back the keys. “The house is yours. Enjoy it.”

We each are building our house. Ourselves. We are the sum total of what we put in. Any corners cut show very clearly in the finished product. We are the parchment. We determine how much will be written. Every single drop of ink counts…

These two words, echad (one) and a’cher (other), represent the two outlooks of the world. The view of Yisroel and the view of Amalek. Echod is the recognition that all emanates from Echod, from Hashem. A’cher views ‘other’ things as having power and existence beyond the grasp and realm of Hashem.

Both views begin with an appreciation of the power inherent in the world. The view of Yisroel focuses this power on the ‘yud’, the smallest letter of the aleph beis – that which depicts a beginning. It all has a source. It comes from somewhere. There is nothing haphazard. There is no chance. Echod. The view of Amalek removes the ‘yud’ from the picture. They are left with a’cher. Chance. Coincidence. Mother Nature.

The miracle of Purim, the victory of Yisroel over Amalek, must make its way into our every day lives. Hashem’s name isn’t mentioned once in the Megilat Esther (Book of Esther). He’s hidden but so obviously there. Echod, not a’cher. How else could everything have worked out the way that it did? As we are living our lives and ‘building our houses’, we must realize that He’s hidden but so obviously there. Echod, not a’cher. That drop of ink. Include the ‘yud’. As we are ‘writing our parchments’ we must realize that every drop of ink will make a tremendous difference in who we are and what we will become.

A joyous Purim and a great Shabbos,

This is dedicated to the memory and z’chus/t (merit) of Miriam bas Shmuel a”h, the mother of a dear talmid and friend, who passed from this world this past Shabbos, the 9th of Adar. TNZB”H.