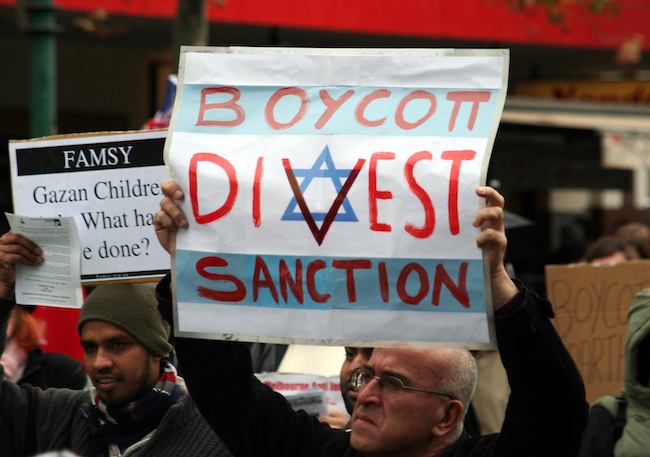 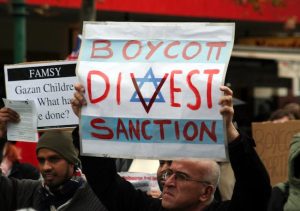 How can I curse whom God has not cursed, and how can I invoke wrath if God has not been angered? (Bamidbar 23:8)

BDS HAS ITS origins in this week’s parsha. “Boycott, Divestment and Sanctions” is an Arab-led initiative to force Israel to surrender land that really belongs to the Jews. Balak and Bilaam tried to do the same thing to the Jewish people in their time, to keep them from entering the land that God had given to the descendants of Avraham, Yitzchak, and Ya’akov.

Ostensibly, the goal of BDS is to bring Israel to its financial knees, forcing the Jewish nation, for the sake of survival, to surrender land to Arab pirates. As self-righteous as it appears, any “success” BDS has had to date is because it garners support from people who do not like the Jewish people for one reason or another. History and International Law certainly do not support its premise, as anyone interested in the truth would quickly find out.

One could argue that Balak and Bilaam were there first, so why shouldn’t they defend “their” land against the invading Jewish army. The answer is, Balak was from Moav, and not one of the seven nations on the conquering list. Bilaam was from Midian, and completely off the agenda for the Jewish people. They had no business interfering with Jewish possession of the Land.

The Jewish people at that time had yet to take the land and set up a country. There was nothing yet to boycott, sanction, or divest from. Instead, Balak and Bilaam turned to something even more diabolical: a curse.

It’s complicated. First of all, what is this curse business about, and secondly, how can such an EVIL person like Bilaam take advantage of it?

The Talmud answers this question:

Our Rabbis taught: God is angry every day, but how long does His anger last? A moment. And how long is a moment? One fifty three thousand eight hundred forty eighth of an hour is a moment. No creature could ever precisely fix this moment except Bilaam the wicked, of whom it is written “who knew the knowledge of the Most High”…He knew the exact hour when The Holy One, Blessed Is He, is angry…

Rebi Elazar said: “The Holy One, Blessed Is He, said to the Jewish people, ‘O My people, see how many righteous acts I did for you, in that I abstained from anger all those days! Had I been angry, none would have remained or been spared of the Jewish people’s enemies.’” This is what Bilaam referred to when he said, “How can I curse whom God has not cursed, and how can I invoke wrath if God has not been angered?”          (Bamidbar 23:8). (Avodah Zarah 4a)

To be clear, God does not actually GET angry. He just ACTS that way, with all the “trimmings”…for our sake. When we get angry, it is usually emotionally-induced. We become annoyed, our blood boils, and then we lash out, either to vent, to make our opinion known, our both. It may have little to do with the welfare of the person who has angered us.

God’s “anger” is different. It is JUSTICE-induced, meaning that it occurs for the sake of truth and justice. Therefore, if someone is a “recipient” of God’s anger, either DIRECTLY or INDIRECTLY, then it means that JUSTICE has demanded that the person “suffer” in some way. WE may not know why, but GOD does. In OUR world there CAN be “victims.” In GOD’S, there are NONE.

Does a curse really have power? Of course not. God is the ONLY power in the world. It can’t work if HE doesn’t MAKE it work. So if a curse is going to be effective in any way, it can only be because God has decided to “give” it power, because the subject of the curse deserves its intended consequence.

The only question is, how can such an evil person set such Divine judgment into motion? They have no merit, so why do they get to be God’s messenger of Divine justice, and “enjoy” the destruction they themselves caused.

It is no merit to be God’s instrument of justice in this world, unless it is to destroy evil. Wiping out a city of idol worship, like Jericho in Yehoshua’s time, was a GREAT merit, and one that had to be earned. But being a punishing “strap” for good people is not a merit, but something for which a person will have to answer for at some point in time.

Shaul: You and I both know that if Dovid was not worthy of being hit, I could never have laid a finger on him!

God: Correct. But someone else could have done it. You chose to be someone who could hurt other people, and for that you are punishable. I just gave you the chance to prove that.

So what God was really saying to the Jewish people was, “Even though you were WORTHY of Divine judgment and punishment at the time Bilaam wanted to curse you, and Bilaam was “worthy” of instigating it, I suspended My judgment of you at the time, to render his attempt to curse you ineffective.”

There had been a stay of judgment, but only to give the Jewish people time to do teshuvah and avoid punishment altogether. But as the parsha reveals, we didn’t do the teshuvah, and disaster ensued as the result of a different kind of curse initiated by Bilaam: the women of Midian.

In the end, 176,000 Jews became involved in idol worship as a result of Bilaam’s “advice,” and were killed. Another 24,000 died from the tribe of Shimon because of plague. It made the total 200,000 altogether, which was quite a curse!

There are a lot of “enemies” of the Jewish people out there, most of them quite scary. But what ought to make them scary is not the power to hurt they project to the world, because they really have none. In the words of the famous Rebi Chanina ben Dosa, “It is not snakes that kill, but sin” (Brochos 33a). This is why Bilaam had the Jewish people sin first, in order to “cause” God to do to them what Bilaam had been hired to carry out.

But once the judgment was done, and Divine justice had been carried out, it was time to make Bilaam pay for his role in it. He got to pick up his “paycheck” for his role in the disaster at Shittim, but was executed shortly after before he could “cash it.”