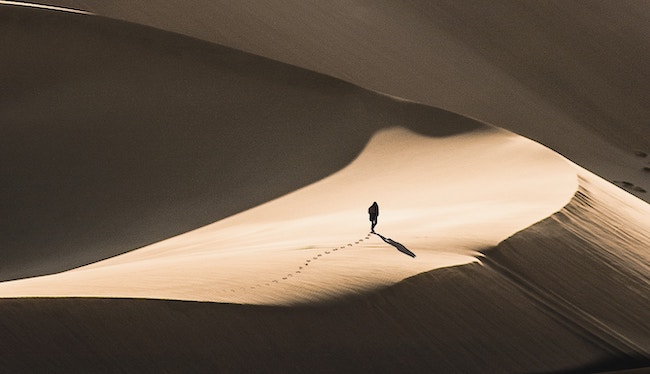 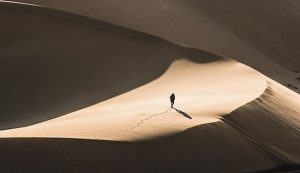 God spoke to Moshe in the Sinai Desert… (Bamidbar 1:1)

THE JEWISH PEOPLE became a nation in Egypt, primarily during intense slavery. Pharaoh tried to reduce our ranks through life-draining servitude, but we grew in great numbers instead. Then we spent 40 years in a desert wasteland, and completed the process of nationhood there.

That’s not the way it is supposed to happen. Nations die in servitude. They certainly don’t survive the scorching desert sun of the Sinai Desert with their elderly and children. We not only survived, we THRIVED.

Not on our own, of course. Had God not protected us and provided for our every need, we would have died out there, either in Egypt or in the desert. No wonder it was so easy to be convinced by the spies to remain in the desert, and not to go up to Eretz Yisroel. They weren’t leaving the desert for paradise, they thought. To THEM it looked as if they were leaving paradise for a “desert.”

It’s a choice that most of us would have made also, and would have felt justified doing so. The Generation of the Spies did not abandon God. How could they? He was right there, hovering above them, and part of everything they were, and all that they ate and drank. It was a completely miraculous existence, obvious to anyone who was a part of it (which the Erev Rav wasn’t).

They certainly weren’t rejecting Torah. On the contrary, it was one of the reasons why they chose the desert. They were already in “Kollel,” and making aliyah meant going to war against the Canaanite nations. Even with spectacular miracles, it was still a hassle, and it would be a long time before they could return to an idyllic Torah lifestyle again—if at all.

So what WERE they rejecting?

The answer was in last week’s parsha, except we may not have noticed it.

In Parashas Bechukosai, the Torah informed us of the trouble in store for us if we do not keep Torah. Sounds pretty drastic. Sounds like enough of a “putch” to put ANY reasonable person back on their spiritual track.

Apparently it wasn’t. The Torah continues and says that if we deal with God’s “nudging” back to the right path thoughtlessly—b’keri—then He too will act b’keri to us. He will ACT as if He doesn’t see what we’re going through, and leave us to our troubles. We’ve seen where THAT can lead on many occasions.

Who is the Torah talking to? Secular Jews who question the existence of God and validity of Torah? No, the Torah is warning Torah-abiding Jews, Jews who believe in God, live by Torah, and who, by all outward appearances, seem like committed Jews.

If that is the case, then how can THEY ever act b’keri? They learn Gemora, review halachah, and probably even learn mussar. Shouldn’t that guarantee that a person would NEVER ignore God on any level?

Also apparently not. We’re just coming off the mourning period of Rebi Akiva’s 24,000 students. They died during the Omer Period, all because they were not accustomed to showing the proper respect to one another. They believed in God, excelled at Torah, and died prematurely all because they could not muster sufficient respect for one another? Sounds rather harsh, no?

Yes. That is why there has to have been something else more profound that they did wrong. The lack of respect they showed for one another was a symptom, not a cause. It revealed another more fundamental problem, and it was for THAT they were struck down early in life by God.

I witnessed a little of this on a recent Shabbos. I was a guest at a shul where they usually have someone local give a short halachah shiur before Ma’ariv on Friday night. It is always a talmid chacham talking to talmidei chachamim.

Within moments of starting, the speaker said something that one person jumped all over, and then another. He explained himself, but they argued more. I could see the speaker was taken aback a bit, but handled himself well. But it happened at least two or three times, and once it appeared that he had lost control of the discussion as others debated among themselves. I myself was feeling uncomfortable.

“Milchemes Hashem,” I have been told when I have questioned such cut-throatness, which I witnessed a number of times in a number of shuls. “These are the battles of Hashem,” they explained to me, “and therefore it is perfectly normal and okay.”

But I can’t help think about Rebi Akiva’s students who died because they too fought such “wars of God,” but apparently without sufficient respect for one another. They probably thought they weren’t doing anything wrong, which is why they didn’t bother to change themselves. Had they not died, we wouldn’t have known otherwise either.

So I asked myself, “Could the same points have been made without humiliating the speaker?”

“Could the seriousness of the questions be conveyed without the cost of another talmid chacham’s honor?”

Because it turns out that there are two “wars of God” that we fight, the one on the outside and the one on the inside. What I have witnessed in the past has been mostly the external wars. When they are fought with a sensitivity to truth but not with a sensitivity to another person, then the war is being lost on the inside, and therefore, on the outside as well.

Changing that is a matter of feeling more for others than we do for ourselves. Humility is the key to everything, but especially to remaining true to the truth on the inside as well as on the outside. A zealot for God is only a zealot for God when he avenges God, and not himself in any way.

So we wandered the desert for 40 years. The Talmud speaks about the midbar, and how it is such a good representative of the trait of humility. It neutralizes all the selfishness of a person, and allows them to be selfless, the prerequisite for receiving and properly living by Torah.

We can see this from the spies as well. After they arrogantly rejected Eretz Yisroel, God decreed their deaths in the desert. It was a humbling experience, so-much-so that the next day they ran like children to undo their wrong, even at GREATER cost to their lives. If only they had had that kind of humility BEFORE they spied the land.

Before anyone complains about how insensitive God has been to their problems, they should realize that the insensitivity begins with us. If it ends with us, then we can bring God back into our lives, and enjoy far more miraculous Hashgochah Pratis.