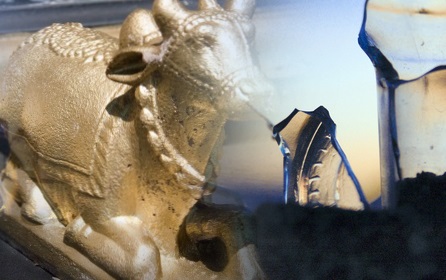 Heavenly Omens vs. The Torah / Breaking the Glass and the Luchos 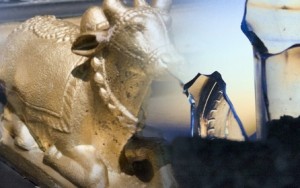 These divrei Torah were adapted from the hashkafa portion of Rabbi Yissocher Frand’s Commuter Chavrusah Tapes on the weekly portion: # 1023 – The Onion That Was Cut With a Fleishig Knife. Good Shabbos!

Omens from Heaven Do Not Trump What the Law Demands

The pasuk in this week’s parsha says, “The nation saw that Moshe delayed in descending from the mountain, and the people gathered around Aharon and said to him, ‘Rise up, make for us gods who will go before us, for this Moshe, the man who brought us up from the land of Egypt — we do not know what became of him!'” [Shemos 32:1] The aveira [sin] of the Golden Calf has remained in the background of Jewish history for thousands of years. It seems inconceivable how it is possible that a people who only several weeks earlier had stood around Mount Sinai, heard the prohibition against idolatry, and said “We will observe and we will listen” (na’aseh v’nishma), could now worship a Golden Calf.

As we have said in previous years, and as all the classic commentaries point out — especially the Ramba”n — this was not real avoda zarah.  They were merely looking for a figurehead to lead them, because they were under the impression that Moshe Rabbeinu had died.

Rashi cites a teaching of Chazal that Klal Yisrael’s assumption that their leader was dead was not based merely on a figment of their imagination, but on what would be considered empirical evidence.  Rashi says that even though the words “boshesh Moshe” seem to indicate that Moshe was delayed, they also made a specific calculation.  Moshe told them that he would be back in forty days.  According to their count, the forty days had elapsed, and Moshe Rabbeinu was not the type of person who came late.  They were convinced that something must have happened to him.  To compound that, Chazal say that the satan came and made the conditions appear as though the world was coming to an end.  Moreover, according to the Medrash, the satan made it appear as if the coffin of Moshe Rabbeinu was floating in the air.

Thus, we have a combination of factors: (1) Moshe’s delay in returning; (2) the confusing conditions that appeared in the world; (3) the people actually saw an image of Moshe’s coffin floating.  The people panicked.  They came to Aharon, who first tried a delaying tactic.  But finally, he threw a gold ingot into the fire, and out came a Golden Calf.

Put yourself in Aharon’s position.  He just threw in gold.  He did not form it.  He did not make it into the shape of a calf.  A Golden Calf came out.  Talk about a Heavenly omen!  Is this not a sign from Heaven that there must be something to this?  Not only that, but Chazal (according to one opinion), say that Aharon took the Shem Hashem (Name of G-d) and threw it into the fire together with the gold.

If we put all these factors together, was it not only natural that Klal Yisrael should commit this aveira?  When Moshe Rabbeinu pleads on behalf of the Jewish people, why doesn’t he use all these “omens” and valid rationalizations as a defense?  “What does Hashem want from these people? They thought I was dead, they saw the coffin, the Golden Calf miraculously emerged from the fire,” etc., etc.  And yet we see that despite all the things that Moshe Rabbeinu could have said, he did not use any of these excuses.  Why not?

Sometimes in life there are extenuating circumstances, and there are situations with all sorts of signs.  But the bottom line always is, “What does it say in the Torah?” “What does it say in Shulchan Aruch?” “What is the Will of G-d?” If it is clear that “This is what the Law demands,” then the rest of the calculations have to be ignored.  If the Torah says “Do not make for yourself a graven image” [Shemos 20:4] then that is the ultimate consideration.

Another Reason the Chosson Breaks a Glass Under the Chuppah:  Zecher L’Shviras HaLuchos

There is a universal Jewish custom that the chosson breaks a glass under the chuppah at the conclusion of the marriage ceremony.  The conventional reason is that this is zecher l’churban – a commemoration of the Temple’s destruction.  We say, “If I forget thee Jerusalem, let my right hand forget its skill.  Let my tongue adhere to my palate if I fail to recall you, if I fail to elevate Jerusalem above my foremost joy.” [Tehillim 137:5-6]  Anytime we celebrate a simcha, we must remember the churban haBayis, and therefore no simcha is complete while the Bais HaMikdash and Yerushalayim remain desolate.  Therefore, the chosson breaks the glass, “zecher l’churban.”

One of the Geonim (I believe it is Rav Hai Gaon or Rav Sadiah Gaon) gives a different reason for breaking a glass under the chuppah:  It is to remind us that Moshe Rabbeinu broke the luchos [tablets].

At first glance, this does not seem to make any sense.  Why is it that a chosson or kallah under their chuppah need to remember that Moshe broke the luchos?  What message is contained in that historical event that must be commemorated at every Jewish wedding?  I believe it is because the breaking of the luchos, and more specifically, the strength it took for Moshe to take that action, represents one of the great keys for success in any marriage.

At the end of the Torah, when the Almighty records the epitaph of Moshe Rabbeinu, He writes, “And by all the strong hand and awesome power that Moshe performed before the eyes of all Israel.” [Devorim 34:12] Here the Almighty is giving Moshe’s eulogy.  What were his greatest accomplishments?  Rashi elaborates on the points mentioned, one by one:

“And by all the strong hand”:  For he received with his hands the Torah engraved on the luchos.

“And for all the awesome power”:  The miracles and acts of might which took place in the great, awesome wilderness.

The crowning glory, the last item that the Almighty says about Moshe Rabbeinu is…

“Before the eyes of all Israel.”  Rashi interprets:  That his heart inspired him to break the luchos before their eyes, as it says, “And I smashed them before your eyes.”

Why was the breaking of the luchos Moshe’s greatest act?

The answer is that it took tremendous strength of character for Moshe to break the luchos.  It is the nature of humans that when we invest in something, and put our hearts and souls into something, it becomes so dear to us that we rarely, if ever, want to walk away from that accomplishment.  That is the way we are.  Once we become invested in an item or a project, we do not want to abandon it.  The last thing a person ever wants to do is to admit that he was wrong, and to walk away from something in which he has invested a great deal of time and effort.

This explains why in different eras we have seen generals fighting wars despite the fact that it had already become obvious to everyone around them that the war was a losing endeavor. Yet they persisted in pursuing the battle.  Why is that?  Why is it that it took so long for the generals to realize that they were not fighting the Vietnam War in the way that it should be fought?  Once they became invested in the war and in a particular strategy for victory, it became part of them.  It was very difficult to say out loud, “Guess what?  I made a mistake.  It is time to walk away from this.”

We do not need to look further than last week’s Haftorah (Parshas Zachor) when Shaul HaMelech [King Saul] was instructed, in no uncertain terms, to kill out everyone from Amalek; men, women, and children — including animals.  When Shaul came back from the battle, the first words out of his mouth were, “I have fulfilled the Word of G-d.” [Samuel  I 15:13].  When Shmuel asked him:  “How can you say that?  It is not true!”  What does the King say again?  “…Because I have hearkened to the Voice of Hashem…” [Samuel I 15:20] How can he say that?  He was told explicitly what he was supposed to do, and now Shmuel calls him on the carpet for not following instructions, and yet he still claims to have “hearkened to the Voice of Hashem.”  The answer is, because he became invested in the project.  It became him.  It is hard for a person to say, “I am sorry.  I made a mistake.  You are right and I am wrong.”

Moshe Rabbeinu spent literally forty days and forty nights on the mountain — drinking no water and consuming no food.  He exhibited tremendous self-sacrifice to receive the luchos.  But when he came down from the mountain and he saw Klal Yisrael dancing around the Golden Calf, he said “Guess what?  This is not for them.”  He did not rationalize and he did not procrastinate.  It was now necessary for these luchos to be broken.  It took a tremendous amount of strength of character for Moshe to say “I’m walking away from this.”

One of the most difficult things for a husband to do in a marriage — after having long argued a certain issue with his wife – is to walk away and say “You know, maybe she’s right.”

I deal with young men who get engaged and get married.  Invariably, as long as they are going out and are getting engaged, they keep on saying to themselves, “We are literally two peas in a pod; we think the same way about everything.  We have no disagreements, etc., etc.”  Then, two weeks after the marriage, he wants the window open she wants the window closed, and the list goes on and on as to how differently they view life.   These are just the small things…

A marriage requires a person to sometimes say, “Guess what?  You know, maybe I’m wrong.  Maybe her way of looking at this is in fact the more correct way.” That is very difficult.  The prime example of this is Moshe Rabbeinu, who broke the luchos.  In spite of the fact that he put his heart and soul into something, he was prepared to reverse course and write off his exertion and his investment.

This is why we break a glass under the chuppah.  We break the glass to remind us that Moshe broke the luchos.  It is the ultimate reminder that sometimes it is necessary to step back from deep investment in a certain project or position, and say, “Guess what?  I am not right.”  In the case of marriage, this represents having the strength of character to say, “Maybe I am wrong, and she is right.”