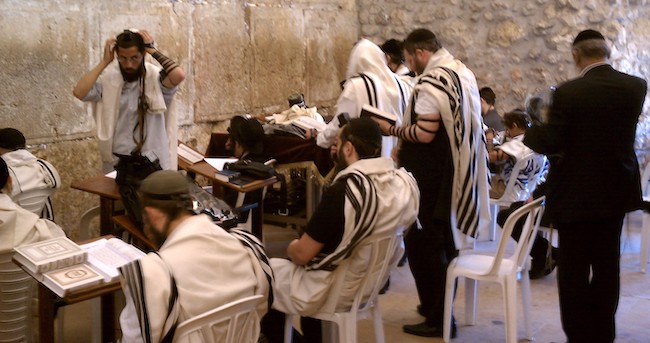 Davening with a Minyan: How Important? 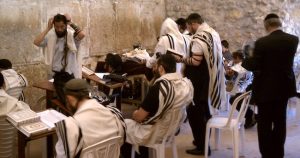 The mitzvah of davening with a minyan (a religious quorum: ten males over bar mitzvah), though Rabbinic in nature, has a Biblical source: When Abraham importuned G-d to save Sodom in the merit of the tzaddikim who dwelled there, he ceased pleading when he realized that there were fewer than ten righteous individuals. This, says the Ibn Ezra(1), is because the fewest number of people that can constitute a tzibur – the basic unit for communal prayer – is ten. It follows that tefillah, the daily prayer service, should be conducted within a tzibur so that its manifold benefits will be realized. Indeed, the Rambam(2) and the Shulchan Aruch(3) rule that all men should make every effort to daven all tefillos with a minyan, for tefillah b’tzibur is much more than a preferred course of action – it is a Rabbinic obligation(4).

Despite the paramount importance of tefillah b’tzibur, however, there are several cases when it becomes secondary to other halachos or situations that take precedence. For example:

It is forbidden for a scholar to learn till late at night if it will cause him to miss tefillah b’tzibur the next morning(8).

Even if one can concentrate better at home, he is still required to daven with a minyan as long as he can concentrate sufficiently to understand the simple translation of the words he is saying(9).

One who must leave for work at a certain time and is faced with a choice of davening in a slow minyan (such as a yeshiva or kollel) and leaving before the end of davening, or davening in a quicker minyan where it is difficult for him to daven properly, should rather daven in the slower minyan – even if it means that he will miss kerias ha-Torah on Mondays and Thursdays(14).

QUESTION: How far must one travel from his home in order to daven tefillah b’tzibur?

DISCUSSION: If the closest minyan is an eighteen-minute walk or more [each way] from one’s home, he is exempt from davening b’tzibur(17). If he owns a car and uses it routinely, he must travel by car for up to eighteen minutes [each way](18). If he uses his car only for emergencies, then he is not obligated to use his car for tefillah b’tzibur either(19).

QUESTION: How many people should be finished with Shemoneh Esrei before the chazan may begin his repetition of the Shemoneh Esrei(20)?

DISCUSSION: The poskim debate this issue. Some maintain that the chazan may not repeat Shemoneh Esrei until there are nine other people listening to him. Those who are still davening Shemoneh Esrei are not included(21). Other poskim are more lenient. They allow the chazan to begin the repetition as long as there are six people listening to him(22).

The Mishnah Berurah does not directly rule on this issue. On a related matter, he quotes both views and suggests that in a situation when the chazan suspects that there may not be nine people answering “amen” to his repetition, he should make a condition (tenai) before starting that his Shemoneh Esrei is a tefillas nedavah, a voluntary prayer, should nine people not answer “amen” to his blessings(23).

5 Igros Moshe O.C. 2:27. See, however, ha-Tefillah B’tzibur (pg. 34) quoting the Eimek Brachah’s view that the Rambam holds that tefillah b’tzibur is not an absolute obligation.

12 As explained in the Discussion on Parashas Vayigash.

13 Beiur Halachah 58:1. According to the understanding of Harav S.Y. Elyashiv (quoted in Avnei Yashfe on Tefillah, 2nd edition, pg. 62) even one who does not daven regularly k’vasikin, but would like to daven k’vasikin on a certain day just for the sake of davening k’vasikin, may daven without a minyan.

15 Written responsum from Harav S.Z. Auerbach (published in ha-Tefillah B’tzibur, pg. 250) who adds that he should make sure that the other congregants – who see him leaving early – are aware of the reason for his early departure. Harav Auerbach adds that even if he is the tenth man who completes the slower minyan, and his early departure will break up the minyan before the last Kaddish, he should still do so.

21Our discussion covers Chazaras ha-Shatz only. The halachos of Kaddish are more lenient.

26According to Chayei Adam 29:1 and Eimek Berachah, Tefillah 6, this should not be relied upon unless there are at least eight people who finished Shemoneh Esrei. See also Orchos Rabbeinu 1:51 that this was the view of Harav Y.Y. Kanievsky.