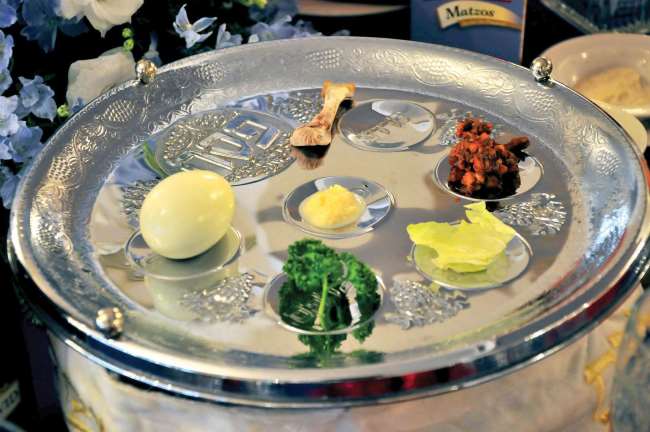 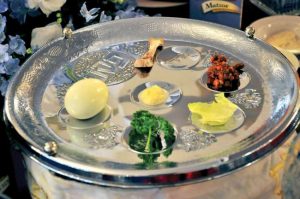 The entire Seder ceremony is replete with symbolic gestures. We drink four cups of wine to represent four Biblical expressions of redemption. We dip and lean like kings to represent freedom, and eat bitter herbs to remind us about the bitter slavery. We also eat other symbolic foods that portray our Egyptian bondage: salt water to remember tears, and charoses, a mixture of apples, nuts and wine that looks like mortar, to remind us of the laborious years in Egypt.

The service is truly filled with symbolism – some direct, and some seemingly far-fetched – and all the symbols are meant to remind us of the slavery we endured centuries ago. But, why not take a direct approach? There are overt ways to declare our gratitude, and there are more immediate ways to mark the celebration. Why don’t we just recite the four expressions of redemption as part of the liturgy instead of drinking four cups of wine to symbolize them? Why don’t we actually place mortar on the table (problem of muktzeh not withstanding) instead of making a concoction to represent it? And instead of reminding ourselves of backbreaking work by eating horseradish, why not lift heavy boxes?

A Jewish intellectual in post-war England approached Rabbi Yechezkel Abramsky, who headed the London Beth Din, with a cynical question: “In reviewing our Hagadah service,” he sniped, “I was shocked at the insertion of , ‘Who Knows One’, a childish nursery rhyme, at the end. Why would the sages put a silly rhyme – ‘One is Hashem, two are the Tablets, three are the fathers,’ and so on, at the end of the solemn, intellectual Seder night service? It is very unbecoming!”

The philosopher was very intrigued. He traveled to Gateshead and located the Yeshiva at which Reb Elya served as the Mashgiach (spiritual advisor). He was led into the room where a saintly looking man greeted him warmly.

“Rabbi, I have many questions,” the skeptical philosopher began. “What is the meaning of life?” “What is the essence of the stars?”

Rabbi Lopian dealt with each question with patience, depth, and a remarkable clarity. Then the man threw out the baited question. “What is the meaning of the number one?”

Rabbi Lopian’s face brightened, his eyes widened, and a broad smile spread across his face. “The meaning of one?” he repeated. “You would like to know the meaning of one? One is Hashem in the heaven and the earth!”

The man was shocked. “What about the depth of the numeral five?”

“Five?” repeated the sage. Why five has tremendous symbolism! It represents the foundation of Judaism – the Five Books of Moses!” The rabbi then went on to explain the mystical connotations that are represented by the number five, and exactly how each Book of the Torah symbolizes a component of the sum.

The man left with a new approach and attitude toward the most simple of our rituals.

At the Seder, we train ourselves to find new meaning in the simple things in life. We teach ourselves to view the seemingly mundane with historical and even spiritual significance. We should remember that when Moshe saw a burning yet non-consumed bush, he realized that his nation is similar – constantly persecuted and harassed, yet never consumed. At our Seder, we view horseradish not as a condiment for gefilte fish, but as representative of our suffering. The Matzoh is no longer a low-fat cracker, but symbolizes the hardships of exile and the speed of our redemption. In addition, we finish the Seder with a simple song that reminds everyone at the Seder, next time you ask, “who’s number one?” don’t accept the answer: the New York Yankees or the Chicago Bulls – think on a higher plane! One is Hashem in the heaven and the earth!

In memory of Joseph Fertig by Mr. and Mrs. Aaron Fertig
The author is the Dean of the Yeshiva of South Shore.