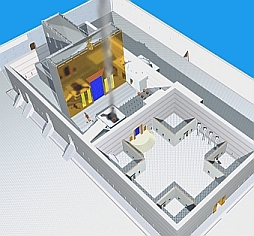 Two thousand years ago the Beis Hamikdash – the Holy Temple – stood on a hill in Jerusalem. As the holiest site in the world, G-d’s Presence was manifest there like nowhere else, so much so that miracles occurred daily in plain sight of all those who passed through its towering gates. The Temple in its heyday was the destination of countless visitors and dignitaries, both Jewish and non-Jewish, whose written accounts describe a grand edifice where white-clad Kohanim, temple priests, swiftly and silently carried out the sacrificial service.

After the Temple’s destruction, our Sages took steps to ensure that its memory never fade from the collective mind of the Jewish People. The layout and structure of the Temple were assigned their own tractate of Mishnah, called Middos (“measurements”), and other details of the Temple’s design were woven into the Talmudic literature so that these concepts became part of our daily Torah study. Now you can get a glimpse of the Second Temple in this 15-week introductory series by Rabbi Yoav Elan, author and illustrator of the Artscroll Tractate Middos. The course material is geared towards those with little or no knowledge of the Temple, although the accompanying illustrations are sure to captivate and intrigue even the most serious scholar.

Questions on subject matter should be directed to Rabbi Elan.