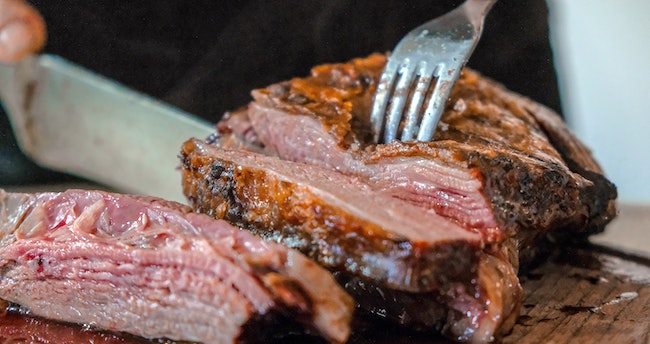 The Meat of the Matter 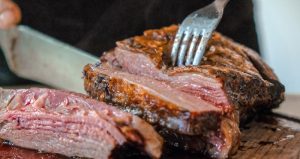 In this week’s portion, the Torah allows us to partake in our material desires, but only according to Torah proscriptions. The Torah clearly allows the consumption of meat, albeit with a few caveats. The Torah states “If the place that Hashem, your God, will choose to place His Name will be far from you, you may slaughter from your cattle and your flocks that Hashem has given you, as I have commanded you, and you may eat in your cities according to your heart’s entire desire. Even as the deer and the ayal are eaten, so may you eat it, the contaminated one and the pure one may eat it together: Only be strong not to eat the blood — for the blood, it is the nefesh — and you shall not eat the nefesh with the meat” (Deuteronomy 12:21-23).

Nefesh has various meanings, simply stated it is the life force of the animal — perhaps what we would call “the soul of the matter.” Clearly, the consumption of blood is a despicable act in the Torah view (a fact conveniently overlooked by the centuries of libelers who had us drinking, mixing, baking and cooking with it.) In addition, the process of extricating all blood from the animal is clearly and intricately defined through the Talmud and Shulchan Aruch. However, delineating the prohibition as one of combining the consumption of the nefesh with the meat surely goes beyond the prohibition of eating or drinking blood.

Surely there is a deeper connotation to the prohibition of the strange concoction of nefesh and meat.

Rav Yehuda Laib Chasman was considered to be one of the luminaries of the mussar movement. Before he immersed himself completely in the world of Torah and mussar, he had a business that sold flour to bakers. He would devote a portion of his day to his business and the remaining time he would spend at the famed Talmud Torah of Kelm under the tutelage of Rabbi Simcha Zissel Ziv, the illustrious Alter of Kelm. One day on the way into the Yeshiva, Rav Ziv called Reb Yehuda Laib over to the side and pointed to the white powder that covered the sleeve of his jacket. Rabbi Chasman took this observation to be a clear moralistic evaluation.

“Rabbi Ziv is pointing out that the flour is becoming part of me. If it is already all over my garments, and it is still with me when I leave my store, then it has become too much a part of me.”

With that, he made a personal decision that changed his life completely. He returned home, and figured out together with his wife that the amount of their current assets would more than cover any outstanding debts and allow them to sustain themselves. They sold the business, and Rabbi Chasman enrolled full-time at the Volozhiner Yeshiva, eventually emerging the great luminary whom we all revere.

Some of us like meat: whether it is the actual beef or the proverbial materialistic affairs in which we indulge. And that’s OK to a point. After all, we are only human.

But the Torah tells us to be careful to separate the soul from the meat. The holy from the mundane. It wants us to understand that other than the quest for the prime rib, which we wish to consume, there are more noble pursuits that should consume us. Therefore, the Torah tells us to clearly delineate the difference and tells us that although we may indulge in worldly pleasure we should be careful not to allow the soul to become devoured with the meat. Thus, it clearly commands, “Do not eat the nefesh with the meat.” A good meal is totally permissible. It even lifts the spirit. However, materialistic indulgences as such should surely never become our obsession or sole desire. For then, it will become part of our nefesh. It will become tantamount to our soul desire.