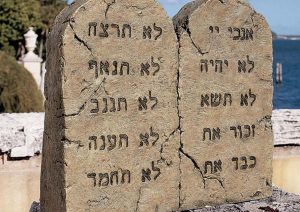 In this week’s Parashah, we read of the Giving of the Torah. The Torah states (19:17), “Moshe brought the people forth from the camp toward Elokim, and they stood at the bottom of the mountain.” Rashi z”l (commenting on Devarim 33:3) describes this standing–indeed, crowding–at the foot of the mountain as a meritorious act deserving of Hashem’s blessing. This understanding is consistent with the fact that Bnei Yisrael proclaimed, “Na’aseh ve’nishmah” / “We will do and we will hear!” It also is consistent with Hashem’s exclamation regarding the days of the Giving of the Torah (Devarim 5:25), “Would that this heart should remain theirs, to fear Me and observe all My commandments all the days, so that it should be good for them and for their children forever!”

Yet, the well-known Gemara (Shabbat 88a) interprets our verse in exactly the opposite way: “‘They stood at the bottom of the mountain’–This teaches that Hashem held the mountain over their heads and threatened, ‘If you accept the Torah, good! If not, right hear will be your burial place!’” This implies that Bnei Yisrael were not enthusiastic about accepting the Torah.

R’ Leib Mintzberg shlita (rabbi in Bet Shemesh, Israel and Rosh Ha’yeshiva of Yeshivat Ha’masmidim) explains that the resolution to this seeming contradiction lies in the difference between Peshat and Drush. Peshat describes the revealed aspect of an event. Had we been at Har Sinai watching, we would have seen a nation enthusiastic to receive the Torah. Drush reveals a deeper, hidden level of the same event. In this case, our Sages are teaching that the apparent enthusiasm was motivated largely by fear of punishment, not completely by love of Hashem. (Ben Melech: Chochmah U’mussar p.38)

“Now I know that Hashem is the greatest of all the Elohim / powers, for with the very thing with which the Egyptians had conspired against them!” (18:11)

R’ Michel Zilber shlita (Rosh Ha’yeshiva of the Zvhil yeshiva in Yerushalayim) writes: Early commentaries explain that the reason why Hashem rewards and punishes “Middah K’negged Middah” / “Measure-for-measure” is so that a person will know that he is being rewarded or punished and that events are not mere coincidence. When Hashem acts Middah K’negged Middah, continues R’ Zilber, He demonstrates the truth of several of the Thirteen Articles of Faith. He demonstrates the existence of reward and punishment. Also, He demonstrates that He exists and that He is all-powerful, as Yitro declared in our verse.

Yitro’s “discovery” requires explanation, however, for the Gemara (Sotah 11a) teaches that the very reason the Egyptians felt safe oppressing Bnei Yisrael with water was that they knew that Hashem had promised not to bring another flood; in other words, the concept of Middah K’negged Middah was known to them! What then was Yitro’s discovery expressed in our verse? R’ Zilber explains: The Egyptians (and Yitro, who was Pharaoh’s advisers) thought that Middah K’negged Middah was a law of nature, a natural reaction to man’s actions, and that, when Hashem promised not to bring another flood, He altered that law of nature as it relates to water. Thus, they thought that the natural law of Middah K’negged Middah could not operate against them if they oppressed Bnei Yisrael with water. Yitro’s discovery was that this is not so; rather, Hashem’s Hashgachah Pratit / Divine Providence reigns over water as well. Thus he said: “Now I know that Hashem–the Divine Name that signifies Hashem’s revelation through Hashgachah Pratit and Middah K’negged Middah–is the greatest of [i.e., greater than] all the Elokim–the Divine Name that signifies Hashem’s revelation through nature. (Note that the Gematria of “Elokim” (86) equals the Gematria of “Ha’teva” / “the nature.”) (Ba’yam Darech: Shmot, Ma’amar 25)

R’ Meir Halevi Rottenberg z”l (1760-1831; Chassidic rebbe and rabbi in Apta and Stopnica) writes: Moshe Rabbeinu had every lofty quality that a person could have, and his preference was to “dwell” in higher worlds, with no connection to this world. Moshe’s speech impediment was a reflection of this, as someone whose thoughts are always on a lofty level has trouble communicating on a mundane level.

However, Bnei Yisrael needed a connection with a Tzaddik, so that he could draw the flow of Hashem’s goodness from the Heavens down to them. Therefore, Hashem commanded Moshe, “Go descend!” And, “Moshe descended to the ‘Am’”–a reference to people who were like smoldering embers that need to be fanned to excite the flames (an allusion based on the similarity of the Hebrew words “Am” and “Omem”). Then, Moshe was able to “say to them.”

Alternatively, in his immense love for Bnei Yisrael, Moshe himself took the initiative to descend from his own high level to where he could understand the people’s needs. The next verse describes Moshe’s reward: “Elokim spoke all these statements [from the Heavens],” thereby raising Moshe to an even higher level. (Ohr La’shamayim)

R’ Yosef Tzarfati z”l (early 17th century; Adrianople, Turkey) explains: People are more affected by what they see than by what they hear; for example, seeing a person drowning makes a different impression on a bystander than just hearing that someone drowned. And, people tend to believe what they see more than what hear; thus, we read (Esther 3:4-5), “They told Haman, to see whether Mordechai’s words would hold-up; for he had told them that he was a Jew. When Haman, himself, saw that Mordechai did not bow down and prostrate himself before him, then Haman was filled with rage.” But, when Haman only heard, he was not filled with rage.

Ordinarily, we see lightning before we hear the associated thunder. However, in preparation for giving the Torah, Hashem “upgraded” Bnei Yisrael’s sense of hearing so that it was more sensitive than their sight. He did this so that their hearing the Torah would be make the desired impression on them. Thus, “The entire people saw the thunder and the flames”–first the thunder, then the flames. This new experience alarmed the people, and that is why they trembled and stepped back. (Yad Yosef: Yitro, Drush 1)

“To engross ourselves in the words of Torah.” (From the blessings over Torah study)

R’ Yaakov Zvi Mecklenburg z”l (1785-1865; Germany) explains: We should study the Written Torah by applying the principles by which the Torah is expounded. That is what we call the Oral Law, without which we do not truly acquire the Written Torah. (Iyun Tefilah)

Midrash Tanna D’Vei Eliyahu Rabbah (ch.2) offers a different reason why the Torah was given publicly. Says the Midrash [brackets are from the commentary Shai La’mora]: To what may this be compared? To a king who had gems and pearls. His subjects came to him secretly and said, “Sell us your gems [so we can make you a crown].” The king said, “Instead, I will give them to you publicly. [Even though you will make me a crown from my own gems, I will consider it as if you gave me a gift.]” This, too, is what Hashem did when He gave the Torah.