The Ends of Heaven 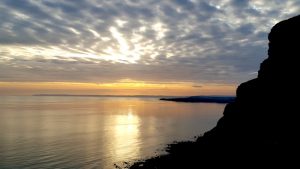 Turbulence seems to be inescapable in Jewish history. When times are good, Jewish people tend to forget about the Creator and His Torah. They wander off in search of the forbidden fruit the pagan cultures dangle in front of them, thus bringing down calamity on their heads.

In this week’s reading, Moses prophesies that the Jewish people will be oppressed, persecuted and driven into exile. But there would always be hope. In the throes of their misfortune, he foresees, they will think about what has befallen them, and they will repent. Then Hashem will gather the exiles from the nations among whom they have been scattered. “If your castaways will be at the ends of heaven,” Moses assures the Jewish people, “Hashem, your Lord, will gather them in from there.”

Some commentators resolve this problem by interpreting the verse in an allegorical sense. Every person, they point out, is a paradoxical hybrid, an improbable fusion of the spiritual soul and the material body. The soul is a spark of the divine, a fragment of Hashem’s heavenly throne sent down to the earth to dwell in a beautiful clot of matter called the human body. The soul yearns to be reunited with its celestial Source, while the body is drawn to the pleasures of the material world. The tensions generated by this internal conflict defines the dynamics of human existence. Who will emerge victorious the body or the soul? The answer to this question determines success or failure when all is said and done.

This then is what Moses was telling the Jewish people. When will Hashem bring the castaways back to the Holy Land? If they are “at the ends of heaven.” If their striving is for spirituality, if they reach out to grasp the fringes of heaven so that they can pull themselves ever upward. But if they are “at the ends of the earth,” if they reach out for the illusory enticements of the material world, they will not be worthy of redemption.

There was once a sage who had only small group of disciples, but he was exceedingly wise. After a while, his fame spread, and he began to receive many requests for admission to his academy.

The sage called a meeting of his disciples to discuss the situation.

“We don’t want to let in just anyone,” he said. “We want only the best and the finest. But how do we determine who they are? By what standards shall we measure our applicants?”

“Intelligence,” said yet another.

The sage shook his head. “None of these are critical. We can accept devious and make them devout, the sinful and make them sincere. But we must have someone who has a genuine desire to grow, someone whose heart and mind are attuned to higher aspirations. That is more important than anything else.”

In our own lives, as we approach the High Holidays with a sense of awe and trepidation, we make all sorts of resolutions about how we intend to improve ourselves. We resolve to be kinder and more considerate to others. We resolve to pray with greater concentration. We resolve to devote more time to Torah study. All these things are good and well. But these are not the most critical things on which we should focus. Rather, we should focus on fanning the flames of the divine spark that dwells within so that we should be consumed with a desire to reach out and touch the heavens. That desire will energize and inspire us and guide us down all the right paths to fulfillment. Someone once asked a sage, “I can only spare five minutes a day for Torah study. What should I choose to learn?” The sage smiled and said, “Study works of spiritual inspiration, and you will discover that you can spare far more than five minutes a day.”

The Secrets Of Longevity

Only two mitzvahs in the Torah come with the promise of a long life: Kibud Av V’em – Honoring our parents and Shliach Hakan – sending off the mother bird before taking the fledgling children.

These mitzvahs seem totally dissimilar and unrelated. In fact, the Midrash tells us that the two mitzvahs are the easiest of the easy, and the most difficult of the difficult, yet they should have the same reward. Honoring our parents is extremely difficult. Sending away the mother bird and taking the children is so easy. Why does the Torah designate the exact same reward? And why did the Torah designate these particular two mitzvahs? For the reward of a long life?

The commentaries explain that these two mitzvahs span the spectrum of human nature. The Torah wants us to perform the merciful act of sending away the mother bird before taking the children. Mercy is a common, human emotion. We instinctively feel a search of mercy and compassion when we see an animal in distress. This is because the animal poses no threat to us. Our base goodness emerges when there are no complications and prejudice ness that come into play. The Torah tells us to reinforce our mercy and compassion through the mitzvah of Shliach Hakan.

Honoring our parents, however, is one of the most difficult of all mitzvahs. It requires us to acknowledge what they have done for us, and forces us to admit how much we need them, and we could not have done it ourselves. It tests our egocentricity to the ambit. We would like to be independent, self sufficient, and invincible. Recognizing our parents forces us to say “I owe it all to you” This then is the most difficult of the mitzvahs.

The Torah, however, does not designate the reward simply on the basis of what is easy and what is not. The infinite reward of mitzvahs is dependant on the spirit in which they were performed, and the love with which they were dispensed. Long life in the world to come can be secured by good deeds regardless of whether our body propels us to do it or creates obstacles. It’s how much in a fuel we are contributing to the act that determines its true value. Thus the Torah designates the identical reward for when we are following our base instinct in the easiest of all mitzvahs, or we are countering it in the most difficult. It is the spirit that truly counts.

A king was being paraded along the highway. Jubilant cheers accompanied the row pageantry pomp and splendor. Nearby a fellow was swimming in the river when he heard news of the king’s imminent passage. Jumping out the water he saw the king’s chariot from the far. In a surge of passion and excitement, he ran up the riverbank and wildly waved and cheered the king in his bathing gear. People were taken aback at his lack of basic. The king noticed him from the far and to the sheer dismay and aghast crowds he welcomed him into his plush carriage. This fellow truly loves him. “He is not thinking of his honor, he is only thinking of mine.”

In our own lives let us be conscious of emphasizing the spirit of the mitzvah as much as the details. The details of the rituals are important, but it is the spirit that enables us to lift off the ground and connect to the heavenly spheres ensuring a life of infinite bliss. Text Copyright © 2011 by Rabbi Naftali Reich and Torah.org.