Honor And Respect For The Sefer Torah 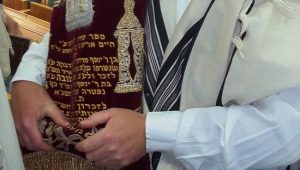 A Sefer Torah, which is the living testimonial of God’s covenant with the Jewish people, must be treated with the highest degree of respect and dignity. Accordingly, there are special halachos which are associated with the removal and returning of the Sefer Torah when it is taken out of the Aron ha-Kodesh for Kerias ha-Torah, the Reading of the Torah. The following is the proper procedure:

When the sheliach tzibbur recites Shema and Echad he should face the congregation. He then turns to face the aron, bows slightly, and recites Gadlu. 13 He should raise the Torah slightly when reciting each of these verses. 14

One is required to stand, 15 without leaning, anytime the Torah is “in motion.” [Many poskim attempt to give the benefit of the doubt to those who sit on Simchas Torah during the hakafos even though the Torah is in motion. 16 Still, it is proper for a God-fearing person to stand during the hakafos unless he himself is holding a Torah. 17 ] Thus when the Torah is being carried from the aron or being raised for hagbahah, one is obligated to stand until it is placed on the bimah or until it is no longer within view. 18

[When the Torah is not “in motion” the following rules apply19 : 1) If the Torah is in the aron and the aron is closed, if it is placed on the bimah or is being held by someone who is sitting down, there is no reason to stand. 2) If it is being held by someone who is standing up (e.g., during Keil maleh rachamim), or it is standing upright in the aron and the door of the aron is open, it has become standard practice to honor the Torah by standing—even though one is not required to do so. 20 3) If, while being carried, the person carrying the Torah stops to rest, one is required to remain standing, as this is considered “in motion” 21 .]

As the Torah makes its way through the right-hand side of the shul towards the bimah, it is considered proper for the congregants to honor it by following behind and escorting it22 as it passes by them. 23 Others hold that it is considered “haughty” to do so and it should not be done. 24 All agree that there is no point for those who are not in the path of the Torah (e.g., their seat is behind the bimah) to come to the front of the shul so that they can follow the Torah.

It is customary and considered correct chinuch for people to bring their young children forward so that they can respectfully kiss the Torah mantle. 25 Some have the custom that adults also kiss the Torah when it passes, 26 while others frown upon this custom and allow only touching or pointing at the Torah and then kissing that hand. 27

When some people carry the Torah to the bimah, they detour or bend down to allow those who are not within reach of the Torah to kiss it or touch it. Some poskim refer to this as an act of degradation, and those who do so should be strongly reprimanded. 28

When two or more Sifrei Torah are taken out of the aron, the ones that are not currently being used are entrusted to a responsible individual to hold until they are to be used. It is improper to allow a child to hold the Torah, 29 and it is prohibited to leave a Torah unattended even if it is left in a safe place. 30

It is prohibited to turn one’s back to a Torah. 31 Accordingly, those who sit in front of the shul directly in front of the Torah must turn around during Kerias ha-Torah. When, however, the Torah is read from a bimah32 [or from a table which is over forty inches high33 ], this prohibition does not apply.

Often, those holding a second or a third Sefer Torah (e.g., on Yom Tov) sit behind the Torah reader or the person being called to the Torah, who are then turning their backs towards those Sifrei Torah. While some poskim disapproved of this, 34 the custom to do so is widely accepted. 35 All agree that while reciting Yekum Purkan, Av Harachamim or Ashrei the sheliach tzibbur should be careful to move to the side of the bimah so that his back does not face the Sifrei Torah36.