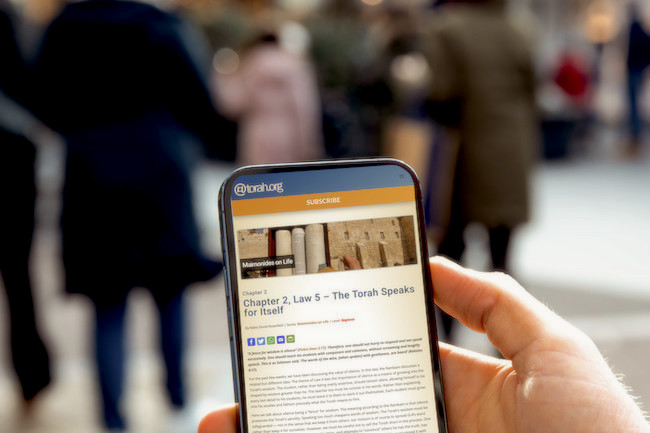 Avtalyon said: Sages, be careful with your words lest you deserve to be exiled and are exiled to a place of bad waters. The students who come after you will drink of these waters and die, and G-d’s Name will be desecrated.

This week’s mishna is poetic and somewhat metaphorical. It warns Torah scholars to take care not to leave their words open to misinterpretation. As the commentators understand, what often sounds perfectly reasonable in the familiar confines of the study hall, if exported to places of “bad waters” — i.e., places of foreign and possibly heretical philosophies — might take on entire new and dangerous dimensions.

(As an aside, the Sages often employed metaphor when referring to heretics or heretical beliefs. When speaking critically of non-Jews or of contemporary religions, it would make reference to Kutheans, Epicureans, etc., giving the impression they had some obscure people or doctrine in mind. This was a simple protective measure; as often the result of self-censorship more than outside review.)

Continuing with our mishna’s thought, in places of bad waters, the Torah scholar’s words will come under much heavier and more critical scrutiny. People who do not understand — or do not want to understand — will twist the Sages’ words beyond recognition. They will be misquoted, misconstrued, and taken out of context. The result will be a lowering of the Sages and their words in the eyes of the masses. Future students, or potential students, will naively come to know a corrupt and distorted version of Judaism. It will no doubt have become anachronistic, intransigent, fanatical, unyielding, chauvinistic, insensitive etc. — most of the absurd stereotypes traditional Judaism has tragically acquired today. As a result, future generations will die spiritually, and G-d’s Name will be profaned.

The Sages were well aware of the need for clear communication and proper PR. The Talmud (Sanhedrin 5b) records a number of stories in which itinerant scholars uttered statements of Jewish law which were naively — and absurdly — misunderstood by the townsfolk (thanks in part, I suppose, to the scholars’ Babylonian drawl). As a result, the Sages of the time decreed that a Torah student must not teach until he is granted permission by his teacher. A true rabbi must not only be erudite and scholarly himself. He must know how to communicate his teachings, how to bring down lofty and abstract ideas to the language and frame of reference of the masses.

Speaking from my own experiences, words which reach a large and diverse audience are heavily cross-examined, and whether willfully or not, are often misconstrued and misunderstood in manners which boggle the mind. Out of x thousand readers, someone is bound to be ticked off no matter what I write — unless I write nothing but polite, meaningless, politically-correct pleasantries. (And if I did that, someone would get annoyed that I’m not actually saying anything.)

It’s interesting to note, however, that traditional Judaism has generally fared relatively poorly in the PR war. In the 19th Century, proponents of the Enlightenment, considering themselves more culturally sophisticated, were quicker to use the media of their time — newspapers, periodicals, advertisements, broadsides — to argue their cases and market their ideas. The more traditional elements within Judaism were always slower on the uptake and found themselves on the defensive. And they have almost invariably lost the media battle.

In more recent times as well, the world wide web had for years been a medium for Judaism- and religion-bashing, and such anti-religious sites went almost uncontested by the traditional camp. It was only through the dedication and foresight of such people as R. Yaakov Menken that the web has been slowly transformed into a tool for Torah dissemination and objective study rather than bickering and mud-slinging (which to a great extent it still is today).

In general, however, the more traditional camps within Judaism have always been much slower to embrace new tools and technologies. Perhaps they have never felt the same need to market themselves. They were never attempting to introduce innovation and conquer new markets. Yet, sadly, with today’s degree of ignorance as to the true meaning and depth of Judaism –with the world’s “bad waters” so deeply entrenched — the advice of our mishna is ever more relevant. We must communicate, speak and write clearly, and bring the Torah to a level that all of mankind, regardless of stripe, background and orientation, can appreciate. We had better be heard — for if we’re not, others will come in our stead.

There is a deeper idea behind the difficulty of representing and packaging Judaism for the outside world. Judaism is not always easy to appreciate from without. Judaism does not just consist of wise little sayings or mechanical ritual. It provides an entire system of beliefs, a world-view of G-d and His relationship with the universe and mankind. From within it forms a beautiful and cohesive whole. From without it may seem strange and foreign; each component of the whole being all but incomprehensible to the uninitiated. Thus, Judaism contains an essence which is often difficult to grasp. Like most great endeavors, it is not something one picks up in easy, step by step fashion. One must integrate ideas, digest, and grow into new thoughts, and slowly achieve some kind of comprehension of the Big Picture.

For this reason, Judaism has often been badly misunderstood. If we approach Judaism from the mentality of Western Civilization and challenge a rabbi: “Well, what do you think about X” (whether that X is the role of women, who is a Jew, democracy in Israel, religious plurality, etc.), one might not be provided with a simple, ready-to-eat, 25-words-or-less satisfactory response — which is about the attention span of the average Westerner today. But in truth, such issues cannot readily be explained and understood within a vacuum. Many much more basic tenets of Judaism must first be patiently covered and understood — one must achieve some grasp of the whole — before the particulars can properly fall into place.

Once upon a time I was reading an article discussing yet another such issue of contention — drafting “ultra-Orthodox” yeshiva students into the Israeli army. As a quick disclaimer, I certainly do not bring this issue up with any intention of addressing it. That is well beyond the scope of this article. However, the author of the article, in some token effort at objectivity, dutifully and accurately quoted a yeshiva student as saying something to the effect that he believes his Torah study protects Israel from danger and terrorism as much as the next man’s manning of dangerous checkpoints. To be sure, to the believing Jew there is certainly a great degree of truth to this. But to have any kind of meaningful understanding of the interplay of the spiritual and physical worlds and how and when physical effort is and is not required (and by whom), requires far more than a single sentence quoted in a popular magazine, no matter how carefully constructed and accurately reported. And to the typical secular reader of such an article — without so much as the slightest moorings to begin to relate to such concepts — one can be sure that the student’s words sounded just plain bizarre: “out of it,” selfish, uncaring, radical, fanatical, and for all practical purposes just removed from the “real world.”

In conclusion, I can only repeat the wishes I expressed a few paragraphs ago. May we, the bearers of Israel’s tradition, find the words, the expression, and the technologies to become messengers of G-d’s truths to mankind. May we recognize the need and rise to the challenge. May we become vehicles for the dissemination of G-d’s wisdom, and may mankind be better off for the effort.