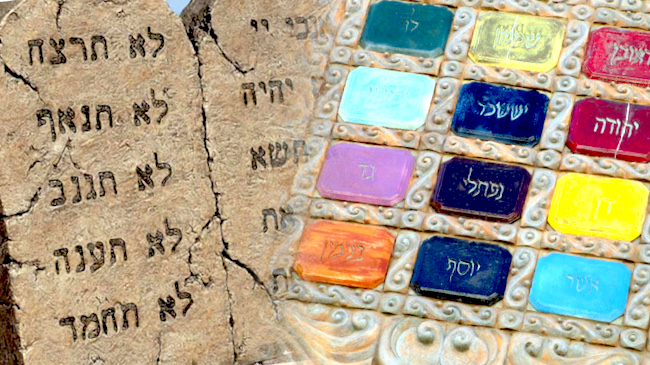 Hillel and Shammai received the transmission from them [the previous generation of scholars, of Mishna 10]. Hillel said: Be of the students of Aaron, loving peace and pursuing peace, loving people and bringing them closer to Torah.

Aaron was the older brother of Moses and co-leader of the Jewish People at the time of the Exodus and Israel’s sojourn in the desert. After the dedication of the Temple, he served as High Priest, and the Kohanim, or Priests, are descended from his family. Aaron was also a prophet and leader of the people in Egypt before Moses’ return from the Land of Midian and the story of the redemption.

“Avos d’Rav Nassan” is an alternate, much lengthier version of Pirkei Avos. Its teachings were collected and edited by R. Nassan, a contemporary of R. Yehuda the Prince, the editor of the Mishna. It contains most of the material of Pirkei Avos together with much greater elaboration. In Chapter 12 (3-4) it illustrates some of the qualities of Aaron in inspiring fashion. A portion of the material found there appears in the following paragraphs.

If Aaron would see someone acting improperly, he would not go over and rebuke or criticize the fellow directly. He would rather befriend him, pretending not to be aware of his faults. The person would eventually grow ashamed: “What would my friend Aaron think if he knew I acted this way behind his back? How could I betray his trust and friendship?” Sooner or later the man would repent his ways.

Further, if Aaron would observe two people quarreling, he would afterwards approach one of them with the following: “I just saw the other fellow besides himself with grief. He’s sitting there saying it’s all his fault and how can he possibly face you again.” Aaron then promptly went to the other fellow with the exact same story. 😉 Needless to say, the next time the people met they were tearfully hugging each other, the life-or-death issues they had been arguing about long forgotten. (Most arguments are about life-or-death issues nobody can quite recall after.)

Lastly, Aaron was credited for saving many a marriage, for running back and forth between husband and wife working his same magic. The mishna attests that in those times thousands of children were named after him — because they would literally have never been born had Aaron not been there to save the parents’ marriages.

For all the above reasons, when Aaron died the Torah writes: “All the Children of Israel cried for Aaron thirty days” (Numbers 20:29). When Moses died, by contrast, the Torah states that merely “The Children of Israel cried…” (Deuteronomy 34:8): the word “all” does not appear. For Moses, only the learned cried — or at least truly cried — only those who had an appreciation for what was lost. Whereas for Aaron everyone cried — learned and unlearned, man and woman. Everyone appreciated who Aaron was and personally felt the loss.

I feel what is personally inspiring about these stories is that Aaron, High Priest and leader of the people, could have easily used his high position to distance himself from the masses — as so many others do. He’s too busy working in the Temple and overseeing the services to bother with the personal issues of the common folk. In fact, Aaron used his very high position to help others: “If Aaron is my friend how could I act this way?”

This assumes even more profound significance when we bear in mind the uniqueness of the Temple service which Aaron performed. Most of the Temple was off limits to the Children of Israel and only accessible to the Priests who performed the service. Further, the Holy of Holies, containing the Ark of the Covenant and the Ten Commandments, was inaccessible even to the Priests. Only the High Priest himself would enter there one day a year to perform parts of the Yom Kippur service.

Thus, if there was one person in Israel who literally could have claimed he is closer and goes closer to G-d than anyone else it was Aaron. He could have held himself distant and above the rest of the nation — perhaps even with some degree of justification. Yet, that same Aaron was the one to run around between husband and wife and man and his fellow.

Possibly for this reason Aaron was selected by G-d to become the High Priest — to represent the people he cared for so dearly and to perform the Temple service on their behalf. Aaron saw himself not as the people’s superior, but as their servant, one who humbly serves and assists his fellow man both within the Temple and without.

Our mishna was authored by Hillel, one of the most famous of the early sages of the Mishna. It is not surprising that he too lived up to his advice and has become known as a student of Aaron in the hearts of the Jewish people. The Talmud (Shabbos 31a) records a number of fascinating incidents about him. A person once made a large bet that he could get Hillel angry. He waited until Hillel was washing his hair Friday afternoon and then began nagging him incessantly with nuisance questions. (Why do Babylonians have large heads, Africans have wide feet etc. — questions which obviously could not have waited.) Nevertheless, the fellow lost his bet.

The Talmud then records a number of stories of non-Jews who approached Shammai (Hillel’s colleague, also mentioned in this mishna) and afterwards Hillel with the request that they be converted to Judaism only if certain outrageous conditions be met. (One asked that he be taught the entire Torah while standing on one foot, another asked provided he be made High Priest.) In each case Shammai promptly threw the person out, seeing within him ulterior motives or a lack of respect for the Torah. Hillel on the other hand saw in them some degree of appreciation for the Torah and gave them some of his time — and regard. Eventually, they all came to appreciate Judaism for its true worth.

To the one who asked to be taught the Torah on one foot, Hillel responded “What you don’t like done to you don’t do unto others. This is the entire Torah; the rest is commentary. Go and learn.” (I don’t believe a better one-line definition of Judaism has been formulated since.) The Talmud thereupon concluded that one should be modest and easygoing like Hillel, not strict and exacting like Shammai.

On the other hand, Aaron, for all his likability and popularity, was never the true leader of Israel. That was Moses’ job. He was the much less forgiving lawgiver and arbiter of justice. The Talmud sums us his attitude as, “Let the judgment grind up the mountain!” (Sanhedrin 6b). Moses received and taught the Torah to Israel — and that required enormous and uncompromising discipline and diligence.

Aaron, by contrast, was nice practically to a fault. Exodus 32 describes how Israel came to commit the sin of the Golden Calf. Before Moses returned from receiving the Torah on Mount Sinai, a portion of the people clamored for an idol — one to replace Moses. Aaron was the leader of the people in Moses’ absence — and he agreed. He felt it would be pointless to take such a frenzied mob head on. (What we’d today call the policy of “appeasement” — which I think we can safely say has never really worked, only whetting the appetite of the aggressor for more.) According to the Sages, Hur, son of Miriam, had already been slain by the mob, and Aaron would accomplish little more than getting killed himself. (An excellent alibi — but not for idolatry.) So Aaron consented, in the hopes of slowing the people down until Moses’ return. Aaron was faulted for his “niceness” terribly. His sin was his contribution to the later death of his oldest two sons (see Rashi to Deut 10:20). The Talmud likewise tells us that till this day we are suffering on account of the sin of the Golden Calf (Sanhedrin 102a).

Moses, upon his return the next day, showed no such softness and indecisiveness; he took Israel head on. He ground their idol to dust, threw it into the well, and forced the perpetrators to drink it.

It seems that to run a nation we need both types of leaders — the Moses who ruthlessly defends law and order, and the Aaron who lovingly and gently brings peace and harmony to the people. And it is a leadership combination Israel has been blessed with many times over throughout its history. In fact, Hillel and Shammai of our mishna fulfilled these same roles. As we saw above, Shammai was the exacting one, who abruptly dismissed the would-be converts who were clearly not ready to embrace true Judaism.

The Talmud records many disagreements in Jewish law between the schools of Hillel and Shammai. The law almost always follows the decisions of the School of Hillel, the “nice” one. However, the Talmud tells us that the students of Shammai were sharper (Yevamos 14a), and there is a tradition that in the times of the Messiah we will follow the School of Shammai. Perhaps ultimately man will be able to live up to the more exacting standards of Moses and of Shammai. But our only hope of ever reaching there is by faithfully following the examples of Aaron and Hillel — through loving peace and mankind, and by using our knowledge and values to patiently bring the world closer to the Torah and to G-d.