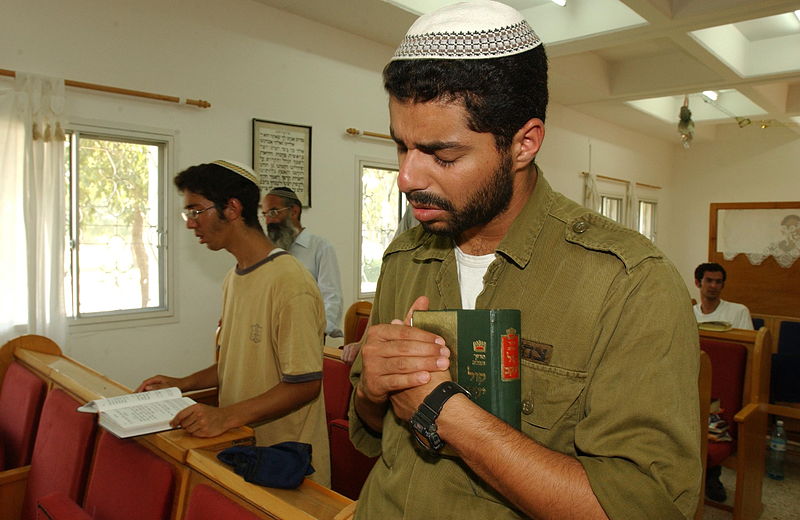 “Rabbi Shimon said: Be careful with the recitation of the Shema and the prayers. When you pray, do not regard your prayers as a fixed obligation but rather as [the asking for] mercy and supplication before G-d, as the verse states, ‘For gracious and merciful is He, slow to anger, great in kindness, and relenting of the evil decree’ (Joel 2:13). Do not consider yourself wicked in your own eyes.”

Last week we discussed the concept of prayer, and in particular how it addresses man’s need both for structure and for individuality in his religious expression. This week I’d like to turn to an equally fundamental and quite fascinating aspect of prayer: its application to both Jew and Gentile.

We find firstly prayer to be a universal concept — one not exclusively the domain of the Jews. In Isaiah G-d promises us that in the End of Days “…My house (the Temple) will be called a house of prayer to all the nations” (56:7). Clearly, prayer is applicable — and meaningful — to all of G-d’s creations (although various high-ranking members of other religions have been arrogant enough — and stupid enough — to claim that G-d does not hear the prayers of the Jews).

We find further that on occasion a Gentile is obligated to pray to G-d. R. Moshe Feinstein was widely regarded as the greatest rabbi in the United States in the decades after the War until his passing in 1986. He wrote in response to a query (Igros Moshe O”C 2:24) that it is his belief that a Gentile is obligated to pray to G-d in his time of need. He explained: From where does such an obligation stem? As we know, there are Seven Noahide Laws — not to kill, steal, commit adultery, etc.; prayer is not one of them?

To this R. Moshe explained, the first of the Seven Laws is belief in G-d. If one truly believes in G-d (and understands the implications of such a belief), he recognizes G-d to be the only True Cause of all that occurs in this world. G-d both directs our lives and personally concerns Himself with our fates. Anyone who truly believes this will naturally turn to G-d in his or her time of need. Who else is there to turn to? All human and natural remedies are but agents of G-d’s will. Although of course we are obligated to avail ourselves of all practical means of helping ourselves, our fate ultimately lies in G-d’s hands alone. Man’s obligation to pray is thus a corollary of his belief in G-d. Anyone with any real sort of understanding of who G-d is will naturally turn to prayer when he needs a helping Hand.

There is, however, one critical difference between the concept of prayer as it pertains to the Gentile versus the Jew — and it will open up for us an important window into a much more fundamental distinction. Based on what we wrote above, say a Gentile does not have a time of need (or at least doesn’t think he does) — for days, weeks, months. He does not feel he has anything in particular to say to G-d. Is he obligated to pray? Apparently not. A Gentile certainly *can* pray if he wants. But if he feels no compelling reason or urge to pray, he would be exempt. G-d, to be sure, is receptive to the prayers of Gentiles. He is there for them and is more than ready to hear their pleas and concerns — if they would only make the effort. But He does not force them.

There is an obligation for every Jew to pray at least once a day. Even if nothing is wrong — we feel we have nothing in particular to say to G-d (in itself reason to start praying), G-d insists that we stand before Him daily. We have a relationship with G-d; it must be constantly maintained and developed. It is not the “foul weather” one of the Gentile. We relate to G-d in both our bad times and our good. We see all as stemming from G-d, and we so turn to Him at all times — with our gratitude, our concerns, and our regrets. Further, we have a mission to G-d and to mankind. We must constantly realign ourselves with that mission and orient our lives accordingly.

Thus, our relationship with G-d is ongoing and continual. It is a relationship we may never ignore. We *must* have something to say to our G-d. And if the words fail us, the Sages have provided us with the outline with which to begin. For we must constantly face our G-d, for only through this can we face ourselves and face our destinies.

There is yet another critical difference between the prayer of the Jew and the Gentile — one which sheds even further light on the different relationships we have with G-d. King Solomon, at the dedication of the First Temple, offered prayers to G-d on behalf of Israel and the Temple (see I Kings, Chapter 8). In Verse 39 he asked that G-d hear the prayers of His nation: “…and You shall give to the man [who prays to you] as all his ways (i.e., all he asks for), for You know his heart…” Solomon continues (41-43): “And also to the Gentile… who hears of Your great name, Your strong hand, and Your outstretched arm, and he comes and prays to this house, shall You listen from the Heavens Your dwelling, and do everything for which he calls to You, so that all the nations of the world will know Your Name…”

The commentators note a discrepancy in King Solomon’s language (see Rashi to Genesis 27:28). Regarding Israel, Solomon asked that G-d hear our prayers, but only as He “knows our hearts” — only if the prayers are sincere and the petitioner deserving. Regarding the nations, however, Solomon asked that G-d does “everything for which he calls to You” — evidently, whether he deserves it or not. Solomon wanted G-d’s Name elevated in the eyes of the Gentiles. Always answer them, he prayed. They should see Divine Providence in action. Let them know You are a G-d who hears — and responds.

Regarding us there are no such assurances. We are not answered as a matter of course — or at least the answer might be no. We, the descendants of Abraham, Isaac and Jacob, are far stronger in our faith. If G-d seemingly does not respond to our pleas, we will neither reject Him nor fail to recognize Him as the sole Master of the universe. We will see the shortcoming as within ourselves — that the G-d who hears all prayers expects more from us before He responds — or knows that what we ask for is not in our best interests. And we will persevere in our faith regardless.

Thus, in a way the nations of the world have it easier. G-d makes fewer demands on them. He is there for them and always responds to them — at least in periods when His Temple stood. (The Midrash states that if the nations had any idea how much harm they were doing *themselves* by destroying the Temple, they would have encircled it to protect it (Bamidbar Rabbah 1). Today, sadly, the cords which bind the physical and spiritual realms are far more tenuous.)

We, however, have no such assurance. G-d gives to us and provides for us, but He expects in return: it is not for free. The blessings and closeness come with awesome responsibility. Our Father in Heaven does not just give; He warns, rebukes, and withholds as well. Our relationship is thus far more demanding, but potentially, far more rewarding. We might even say that our G-d does always answer us as well — there is no such thing as a prayer in vain — but that He expects us to be mature enough to understand that the answer might just be no.