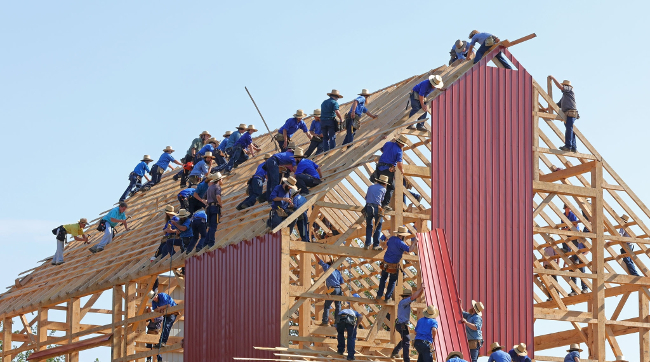 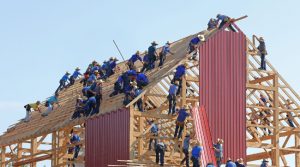 Sponsored by
Shlomo and Sharona Katz
in honor of the birth and
Brit Milah of their grandson,
Baruch Shimon Katz נ”י

A large portion of this week’s Parashah is devoted to the holy days: Shabbat, Pesach, Shavuot, Rosh Hashanah, Yom Ha’kippurim and Sukkot. Regarding the latter, our Parashah says (23:40), “You shall take for yourselves on the first day the fruit of a citron tree [i.e., an Etrog], the branches of date palms [a Lulav], twig of a plaited tree [Hadassim], and brook willows [Aravot]; and you shall rejoice before Hashem, your Elokim, for a seven-day period.” From this verse, our Sages derive that taking a Lulav and Etrog is a Mitzvah from the Torah only on the first day of Sukkot, except “before Hashem”–i.e., in the Bet Hamikdash–where it is a Mitzvah for all seven days of Sukkot. (However, our Sages ordained that it should be taken every day of Sukkot, except Shabbat, even outside of the Bet Ha’mikdash.)

Why should the Mitzvah be different (on a Torah level) in the Temple and outside of it? R’ Avraham Shapira z”l (1914-2007; Rosh Yeshiva of Yeshivat Merkaz Ha’rav and Ashkenazic Chief Rabbi of Israel) explains: The message of Sukkot is that a person needs to build a “new house.” Unlike Pesach, which represents sudden dramatic change, the holidays of Tishrei represent painstaking, step-by-step growth. There is Rosh Hashanah, then Yom Kippur, and then Sukkot, which builds up to the crescendo of Simchat Torah. Sukkot, when we build new homes (i.e., our Sukkot), teaches us about the possibility of building, of creating. The Bet Hamikdash, likewise, is our “second home,” where we build ourselves spiritually. In order to highlight the importance of building “new homes” for ourselves, the Torah gave different laws to our “regular” homes and the Bet Hamikdash. (Imrei Shefer)

“The Kohen who is exalted above his brethren–upon whose head the anointment oil has been poured or who has been inaugurated [literally, ‘has filled his hand’] to don the vestments . . .” (21:10)

In addition to the above verse, there are several other verses that refer to the inauguration of the Kohanim as “filling their hands,” including (Shmot 29:9), “You shall inaugurate [literally, ‘You shall fill the hands of’] Aharon and his sons,” and (Shmot 29:29), “to become inaugurated [literally, ‘to fill their hands’] through them.” What does this expression mean?

R’ Aharon Toledano shlita (Israel) explains: The Torah says (21:6) that Kohanim should be “Kadosh” / “holy.” As that verse indicates, the opposite of Kadosh is “Chalal.” Literally, “Chalal” means “void.” (The word “Chullin” / “profane” has a similar connotation.) In contrast, the word “Kadosh” is phonetically related to the word “Gadush,” which means “overflowing,” like hands that are full. Holiness gives a soul a feeling of fullness; hence it is “overflowing” and, hence, newly inaugurated Kohanim have “full hands.” In contrast, the absence of holiness, the existence of a Chalal, gives the soul the feeling of having a void. (Ha’dibbur Ve’ha’machshavah: Orot Ha’kodesh p.31)

“When you slaughter a feast thanksgiving-offering to Hashem, you shall slaughter it willingly.” (22:29)

R’ Eliezer Dovid Gruenwald z”l (1867-1928; Hungarian rabbi and Rosh Yeshiva) observes: A person is required to bring a Korban Todah / thanksgiving-offering if he was in danger and was saved. We read in Tehilim (107:1-2), “Give thanks to Hashem, for He is good; His kindness endures forever. Those redeemed by Hashem will say it, those whom He redeemed from the hand of distress.” This verse reflects man’s tendency to thank G-d after man has been saved. However, one rarely remembers to thank G-d for not placing him in danger in the first place. Thus our verse teaches, “When you slaughter a feast thanksgiving-offering to Hashem, you shall slaughter it willingly.” Don’t wait until you are required to thank Hashem. Rather, thank Him voluntarily. (Haggadah Shel Pesach Chasdei David)

We read in Tehilim (118:28 – recited as part of Hallel), “Hashem is Kel; He will illuminate for us. Bind the festival offering with cords until the corners of the Altar.” The Gemara (Sukkah 45b) comments on this verse: “If one makes an ‘Issur’ [literally, ‘binding’] for the festival with food and drink, it is as if he built an altar and offered a sacrifice on it.” Rashi z”l explains: “Some say that this refers to making a feast on the day after a festival”–i.e., the day we call “Isru Chag.”

Why do our Sages value so highly the act of making a feast on Isru Chag? R’ Ben Zion Nesher shlita (one of the senior rabbis in Tel Aviv, Israel) explains: On a Yom Tov, a person is elevated to a higher spiritual level. He basks in the ambiance of the festival and is enlightened by the spiritual lights that are shining, as well as from the many Mitzvot associated with the holiday. However, that is not an end in itself. Rather, the goal is to carry that elevated state into the weekdays that follow, to bring the holiness of the festival into the mundane, “dark” workdays that come afterward. If a person can do that, it is as if he has brought a Korban–i.e., he has brought himself closer (“Karov”) to Hashem.

Based on the above, we can understand the beginning of the verse in Tehilim, as well: “Hashem is Kel; He will illuminate for us.” Various verses refer to a Mitzvah as a “candle.” The “light” of an individual Mitzvah is limited, just as a candle gives light only a few paces ahead of the person carrying it. Here, we ask Hashem: Let our observance of the festival illuminate the world around us more than one candle can. How? Through our observance of Isru Chag. (Haggadah Shel Pesach Shir Tziyon p.102)

“When you reap the harvest of your land, you shall not remove completely the corners of your field as you reap and you shall not gather the gleanings of your harvest; for the poor and the convert you shall leave them; I am Hashem, your Elokim.” (23:22)

Why is this verse placed in the middle of a section that teaches about the festivals? R’ Yoel Sirkes z”l (Poland; 1561-1640; known as the “Bach” after the initials of his Halachic work Bayit Chadash) writes: One might have thought that, on the festival, when people don’t work and often go for long strolls, it is a good time for the poor to go out and collect the loose stalks from the harvest that are left for them. The placement of this verse teaches that they may not leave the Techum Shabbat / 2000 Amot limit beyond the inhabited area in order to collect these loose stalks. (Meishiv Nefesh Al Megilat Ruth 1:16)

“Remove the blasphemer to the outside of the camp, and all those who heard shall lean their hands upon his head, and the entire assembly shall stone him.” (24:14)

R’ Moshe Leib Shachor z”l (1894-1964; Yerushalayim) writes: The Gemara (Sanhedrin 43b) teaches that every person who is about to be executed by bet din is encouraged to repent first, and he or she is told, “Anyone who repents has a share in the World-to-Come.” Presumably, the blasphemer in our parashah repented as well, and that is why he merited having a section of the Torah–albeit, the laws of capital punishment–taught because of him. This illustrates how, when a person repents, his sins are converted to merits. (Koach Ha’teshuvah)

Rabbi Yochanan ben Berokah says: “If one desecrates the Name of Heaven in secret, he will be punished in public; unintentional or intentional, both are alike when it comes to desecration of the Name.” (Chapter 4)

R’ Almosnino continues: Why is even the unintentional sinner deserving of a public punishment? To teach the sinner that vis-á-vis G-d, everything is out in the open and nothing is hidden from Him. (Pirkei Moshe)