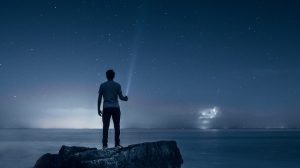 In this week’s Parashah, we read that about Bilam’s efforts to curse Bnei Yisrael at the behest of Balak. Who was Bilam? According to Midrash Bereishit Rabbah, he was a prophet equal to Moshe Rabbeinu, given to the gentile nations so they could not complain of unequal treatment.

R’ Yitzchak Arama z”l (Spain; died 1494) writes that this Midrash should not be taken literally. Rambam z”l describes the process by which one becomes a prophet. Among other things, one must perfect his or her character, subdue his or her desires for material things, and attain great wisdom. Then, depending on other factors, Hashem might choose to reveal Himself to the would-be prophet, or He might not. In contrast, our Sages describe Bilam (based on verses) as an immoral, greedy, degenerate. How could he be a prophet? (R’ Arama writes that Bilam would have had the same odds of being prophet as a donkey or a frog would have.)

Rather, writes R’ Arama, the Midrash should be understood as follows: Hashem created the world such that magicians and astrologers could read the future from the stars or through other means. However, Moshe Rabbeinu prayed that Hashem highlight the uniqueness of the Jewish People by taking the ability to see the future away from the gentiles (see Shmot 33:16 and Berachot 7a). Hashem complied, but He left one “prophet”–really, a magician/ astrologer–Bilam, among the gentiles, so they would not complain.

It is essential to know the defining characteristics of a true prophet, R’ Arama writes. First and foremost, a prophet is a highly refined person removed from all physical and material desires. Also, a prophet is a kind, loving person, who seeks only good for others. When Hashem directs him to foretell harm, the prophet complies, but he or she is pained. All of these are characteristics that Bilam, as well as all false prophets, lacked. (Akeidat Yitzchak ch.82)

We read (Yeshayah 57:20), “But the wicked are like the driven sea that cannot rest.” Midrash Yalkut Shimoni comments: The Jewish People are likened to sand, as is written (Hoshea 2:1), “The number of Bnei Yisrael shall be like the sand of the sea.” The nations of the world are likened to the sea, as is written (Yeshayah 17:12), “Woe to the tumult of the many nations, who are tumultuous as the tumult of the seas.” Says [the prophet] Yeshayah, “The first wave from the sea says, ‘I will rise up and flood the earth,’ but when it comes to the beach, it bows before the sand; nevertheless, the second wave does not learn from the first wave [and the process is repeated, and so with subsequent waves]. Similarly, Pharaoh started up with the Jewish People, and Hashem knocked him down; so it was with Amalek, then Sichon and Og [in last week’s Parashah], then Bilam and Balak. Not one of them learned a lesson from his predecessor’s fate. [Until here from the Midrash]

R’ Shlomo Brevda z”l (1931-2013; United States, Israel, and England; traveling Maggid / preacher and a prolific author) observes: One should marvel after reading this Midrash. All of the enemies of the Jewish People listed in the Midrash met their ends within a 40-year period, one after another. Even so, not one of them learned from his predecessor. But, the reason is clear: No matter what one hears or sees, it will have no impact on him unless his heart is seeking the truth. These wicked people had impure hearts, interested only in worldly pleasures. What is meant by an “impure heart”? It refers to one who knows his Master and intentionally rebels. We, in contrast, pray (in the Shabbat Amidah), “Purify our heart, to serve You sincerely (literally, ‘in truth’)!” (Lev Shlomo: Shavuot p. 220)

Midrash Shmot Rabbah (29:9) notes that the prophets liken both the Bet Hamikdash and the dynasty of King David to a lion. The Jewish People also are likened by the prophets to a lion, as is the Babylonian king Nevuchadnezar, who destroyed the first Bet Hamikdash. And, the zodiacal sign of the month of Av, when both Temples were destroyed, is the lion (Leo). Lastly, the Gemara (Berachot 3a) teaches that Hashem “roars like a lion” over the destruction of the Bet Hamikdash. What is the significance of this lion imagery?

R’ Michel Zilber shlita (Rosh Hayeshiva of the Zvhil yeshiva in Yerushalayim) explains: The Gemara (Sanhedrin 106a) interprets Bilam’s words in our verse as follows: “Woe to the nation that will be present when Hashem redeems His nation! Who dares to come between a lion and a lioness when they come together?!” [Until here from the Gemara] Rashi z”l explains: “Who will dare stand in the way when Hashem is ready to gather in the Jewish People?” R’ Shmuel Eliezer Eidels z”l (Maharsha; Poland; 1555-1631) adds: “Who will dare stand in the way when Hashem reinstates the two letters that His Name (“Elokim”) has in common with the name Yisrael, i.e., the letters that spell ‘El / these’ in our verse?”

In short, writes R’ Zilber, our verse, coupled with the above Midrash, teaches that the bond between Hashem and the Jewish People was, and continues to be, as strong as the attraction between a lion and a lioness. That is a bond that no one dares to interfere with.

Notably, continues R’ Zilber, when gentiles entered the Temple to destroy it, they found the Keruvim hugging each other. Commentaries wonder: The Keruvim were supposed to turn towards or away from each other to indicate, respectively, Hashem’s pleasure or displeasure with the Jewish People. Why were the Keruvim embracing at the very moment when Hashem was so angry, He was about to destroy the Bet Hamikdash? R’ Avraham Kimchi z”l (Eretz Yisrael; 17th century) explains that, as Hashem was about to separate from His nation, the Keruvim were embracing as a husband and wife would before one of them leaves on a long journey.

In this light, concludes R’ Zilber, we can understand the imagery of the lion. The Midrash is teaching that the bond between Hashem (the “lion”) and the Jewish People (the “lioness”) is so strong that only another “lion” (Nevuchadnezar) could come between them, destroy the Temple (also a “lion”) and cut off the dynasty of David (another “lion”) during the month that has the sign of Leo. Even now, however, Hashem “roars like a lion” in “mourning” over the destruction of the Bet Hamikdash and the exile of the Jewish People. (Bayam Darech: Bein Ha’meitzarim ch.1)

This work, which dates from the time of the Gemara and major Midrashim, expands on many of the ideas found in Pirkei Avot. Here, we present an excerpt from Avot D’Rabbi Natan.

Rabbi Elazar Hakappar says: If one honors another because of the latter’s wealth, he will depart from that person humiliated. . . Thus, we find that the wicked Bilam honored Balak for money, as we read (Bemidbar 22:18), “If Balak would give me his houseful of silver and gold, I still could not transgress the word of Hashem . . .” [Bilam’s choice of words hints that he coveted Balak’s wealth (Rashi).] Where do we see that Bilam departed from Balak humiliated? We read (24:11), “Now, flee to your place. . . Hashem has held you back from receiving honor.” (Chapter 29)

Siddur Avodat Yisrael cites a custom to recite Psalm 79 on the Shabbat on which Parashat Balak is read. Accordingly, we present here verses from, and commentaries on, that Psalm.

“A psalm of Asaf! Elokim, heathens have entered Your domain, defiled Your holy temple, and turned Yerushalayim into ruins.” (Verse 1)

The Gemara (Yoma 69b) teaches: Why are the Anshei Knesset Ha’gedolah / Men of the Great Assembly, the body that led the Jewish People at the beginning of the Second Temple Period, so called? Because they returned the “crown” to its former glory.

The Gemara explains: Moshe Rabbeinu described G-d as (Devarim 10:17), “Gadol / Great, Gibbor / Mighty, and Norah / Awesome.” The prophet Yirmiyah said, however, “Gentiles are dancing in His Bet Hamikdash! Where is His Awesomeness?” Therefore, he dropped the adjective “Awesome” (see Yirmiyah 32:18). Daniel said, “Gentiles are subduing His people! Where is His Might?” Therefore, he dropped the adjective “Mighty” (see Daniel 9:4). But the Anshei Knesset Ha’gedolah said, “To the contrary! When He is patient with the wicked, He demonstrates His Might.” (Rashi z”l explains: Our Sages define “might” as holding back one’s impulses. Similarly, Hashem waits patiently for the right time for vengeance.) “And,” said the Anshei Knesset Ha’gedolah, “if not for awe of G-d, how could the Jewish People have survived the long exile?” Therefore, when the Anshei Knesset Ha’gedolah authored our Shemoneh Esrei, they described G-d (in the first blessing) as: “Great, Mighty, and Awesome.”

R’ Moshe Alsheich z”l (1508–1593; Tzefat, Eretz Yisrael) writes: The same message is alluded to in our verse: “Heathens have entered Your domain, defiled Your holy temple, and turned Yerushalayim into ruins.” Nevertheless, we call You “Elokim”–the Divine Name usually associated with G-d’s Might. (Romemot Kel)