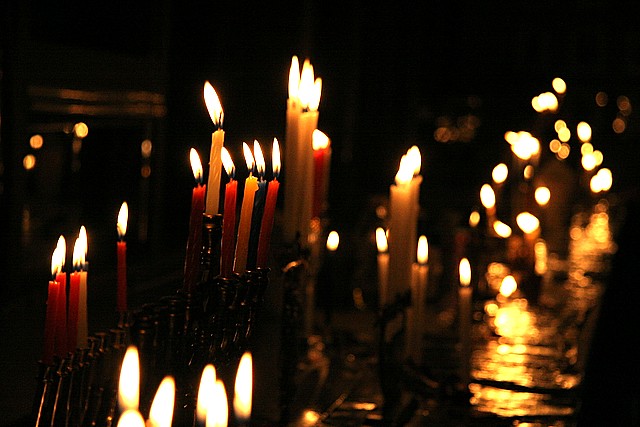 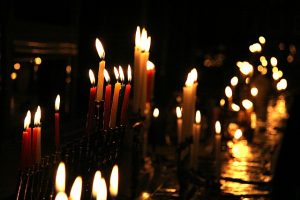 Our Parashah opens with instructions regarding the lighting of the Menorah in the Mishkan / Bet Hamikdash–the third time the Torah mentions this Mitzvah. R’ Raphael Moshe Luria z”l (Rosh Yeshiva in several chassidic yeshivot in Israel; died 2009) explains this repetition:

R’ Moshe ben Maimon z”l (Rambam; 1135-1204; Spain and Egypt) implies that the Bet Hamikdash serves three purposes: (1) it is a place for the Shechinah to rest, as we read (Shmot 25:8), “They shall make a Sanctuary for Me, so I will dwell among them”; (2) it is the place where we can offer sacrifices; and (3) it is the pilgrimage destination where we can go to draw inspiration. (Hil. Bet Ha’bechirah 1:1)

R’ Luria continues: The three times that lighting the Menorah is mentioned in the Torah parallel these three purposes. In Parashat Tetzaveh, lighting the Menorah is mentioned in connection with the command (in the previous Parashah) to build the Mishkan. There is no mention there of what will be done in the Mishkan, only that Hashem will dwell among us as a result of our efforts.

In Parashat Emor, the Mitzvah to light the Menorah follows the list of festivals. This alludes to a connection between the Menorah and the Bet Hamikdash’s role as a pilgrimage destination on the festivals.

Finally, in our Parashah, the Mitzvah to light the Menorah follows the offerings that were brought at the dedication of the Mishkan. This alludes to a connection between lighting the Menorah and the sacrificial offerings. (Bet Genazi)

“Aharon did so; toward the face of the Menorah he kindled its lamps, as Hashem had commanded Moshe.” (8:3)

Rashi z”l comments: This is stated to tell us Aharon’s praise–that he did not act differently from what he was commanded. [Until here from Rashi]

R’ Yehuda Shapira z”l (1923-2009; Rosh Kollel of the Kollel Chazon Ish and a neighborhood rabbi in Bnei Brak, Israel) writes: Many commentaries ask why this is noteworthy. Would we have expected Aharon to behave differently?

He explains: The answer to this question is found at the end of our Parashah, where Miriam and Aharon wonder (12:2), “Was it only to Moshe that Hashem spoke? Did He not speak to us, as well?” Hashem responds by teaching them that Moshe’s prophecy was qualitatively different from any other prophet’s visions (12:8): “Mouth to mouth I speak to him, in a clear vision and not in riddles.”

Before this, writes R’ Shapira, Aharon apparently did not appreciate the superiority of Moshe’s prophecy over Aharon’s own. Therefore, when Moshe told Aharon that he had a prophecy that related specifically to Aharon–the command to light the Menorah–Aharon might have questioned: “Why did this vision not come to me, instead? Is it possible that Moshe misunderstood?” But, Aharon did not question; he followed Moshe’s instructions to the letter. For that, he is deserving of praise. (She’eilot U’teshuvot Be’karmei Yehuda No.4)

The Midrash Sifrei comments: “‘On a day of your Simchah’–This is Shabbat.” [Until here from the Midrash]

R’ Chaim Zaichyk z”l (1906-1989; Rosh Yeshiva of Yeshivat Bet Yosef-Novardok in Buchach, Poland; later in Israel) writes: We do not find any other source for a connection between Shabbat and Simchah. Shabbat is associated with “Oneg” / “pleasure,” but that is a different mental state than Simchah, as the Gemara (Shabbat 62b) states expressly.

R’ Zaichyk continues: On the other hand, it is prohibited to express sadness on Shabbat. Therefore, public mourning is not observed on Shabbat. The Talmud Yerushalmi (Berachot 3:4) derives this from the verse (Mishlei 10:22), “It is the blessing of Hashem that enriches, and no ‘Eitzev’ can increase it.” “The blessing of Hashem” refers to Shabbat, as is written (Bereishit 2:3), “Elokim blessed the seventh day.” “Eitzev” comes from the same root as the Hebrew word for “sadness.”

R’ Zaichyk adds: It is self-understood that Simchah is desirable on Shabbat, but not because it is commanded. Rather, the Shabbat itself and what it represents should generate Simcha organically. (Ohr Chadash)

“But now, our soul is parched, there is nothing; we have nothing to look to except the Mahn!” (11:6)

R’ Ze’ev Wolf of Zhytomyr z”l (Chassidic Rebbe; died 1798) explains: As long as a person is in this world, in a physical state, he cannot grasp Hashem’s awesome power and the brightness of His “light.” Only to the degree that Hashem reveals Himself through His wondrous creations can He be perceived. Thus, Bnei Yisrael were saying, “Now”–when we are still in this world, “our soul is parched”–we cannot grasp lofty abstract spiritual concepts. “We have nothing to look to except the Mahn!”–only by seeing Hashem’s hand in this physical world, such as in the Mahn, can we rise to higher levels. This, writes R’ Ze’ev Wolf, explains why each person tasted something different in the Mahn: each person, likewise, attains different spiritual levels in this world.

In particular, R’ Ze’ev Wolf writes, the message we should glean from the Mahn is Bitachon / trust in Hashem. Since the Torah is eternal, we would be mistaken, he writes, to think that Mahn no longer falls. One can attain a level of Bitachon where he sees that his sustenance comes to him effortlessly, as if he were receiving Mahn. (Ohr Ha’Meir)

“The man Moshe was exceedingly humble, more than any person on the face of the earth.” (12:3)

R’ Noach Weinberg z”l (1930-2009; founder and Rosh Yeshiva of Aish Ha’Torah) observes: Many people mistakenly equate humility with meekness and haughtiness with self-confidence. They are wrong!

He explains: The Torah tells us that Moshe Rabbeinu was the humblest man who ever lived. Yet, he was the one who walked uninvited into the throne room of the most powerful monarch in the world, and demanded, “Let my people go!” And, it was Moshe Rabbeinu, the humblest of all men, who taught the Torah to the entire Jewish nation and left an indelible mark on humanity. Moshe Rabbeinu’s humility did not interfere one iota with his sense of mission or his confidence in the correctness of his path.

R’ Weinberg continues: The confidence that a humble person feels enables him to rise above pettiness. He does not need to answer every critic. He elevates himself above disagreements. A humble person knows his place and enables others to find their places. He can make everyone feel important because he does not feel threatened by them.

In contrast, R’ Weinberg notes, a haughty person has no self-confidence. Despite the image he projects, he is much too busy worrying about what other people think of him to even know himself or his mission. Humility, says R’ Weinberg, is freedom, while haughtiness is a type of slavery! (48 Derachim L’chochmah p.99)

R’ Yitzchak Ze’ev Yadler z”l (1843-1917; Yerushalayim) offers the following definitions for the eighth, ninth and tenth types of prayers. (The first through seventh types were discussed in previous weeks.)

“Nipul” comes from the root that means “to fall,” and it denotes the prayer of someone who recognizes that Hashem is very angry with him because of his great sins. Such a person must “fall” to the ground in submission in order to silence the Attribute of Justice and awaken the Attribute of Mercy. Thus, we read (Devarim 9:18-19): “Then I threw myself down before Hashem . . . for I was terrified of the wrath and blazing anger with which Hashem had been provoked . . .”

“Pilul” refers to prayer that, so-to-speak, argues with the Attribute of Justice.

“Tachanunim” means asking Hashem for a “Matnat Chinam” / a gift given without receiving anything in return. In reality, notes the Midrash Rabbah, no one has a right to demand that Hashem answer him. R’ Yadler explains: No matter how much Torah a person studies and how many Mitzvot he performs, he is not doing Hashem a favor. Rather, everything we receive is a “free gift.” (Tiferet Tziyon Al Midrash Rabbah)

R’ Yehuda Loewe z”l (Maharal of Prague; died 1609) writes: When Moshe Rabbeinu prayed for himself, he requested a Matnat Chinam to avoid the appearance of haughtiness, as indicated by the word (Devarim 3:23), “Va’etchanan”–from the same root as “Tachanunim.” However, when one prays for others, he may pray that they be answered in their own merit, as that is not haughty. (Gur Aryeh)