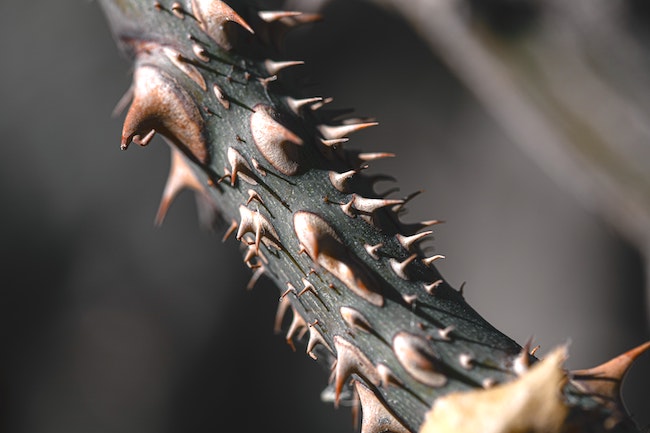 A Fence of Thorns 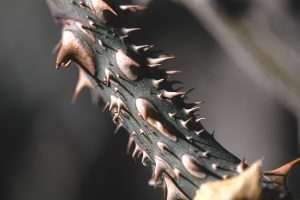 The Midrash Tanchuma cites the verse in our parashah (12:29), “When Hashem, your G-d, will cut down the nations where you come, to drive them away before you, and you drive them away and settle in their land,” and comments: Rabbi Levi said: To what may this be compared? To a king who planted a vineyard on his property which had great cedar trees. The king cut down the cedar trees but left the thorny undergrowth. His servants and household members asked him, “Our master the king! The thorns which grab onto and tear our clothes you left, but you chopped down the cedar trees?!” He answered, “If I had removed the thorns, with what would I have hedged my vineyard? Rather, I did the right thing, and when the vineyard is established, I will burn the thorns.”

The midrash continues: The Jewish People are Hashem’s vineyard, as we read (Yeshayah 5:7), “The vineyard of Hashem, Master of legions, is the House of Yisrael.” When Hashem brought Bnei Yisrael into Eretz Yisrael, He “cut down the cedars,” as it says (Amos 2:9), “I destroyed the Emorite before them, whose height was like the height of cedars.” However, He left some descendants of the Canaanites in the Land to ensure that the Jewish People would keep the Torah, as it is written (Shoftim 3:1), “These are the nations that Hashem let remain, to test Yisrael through them.” When the “vineyard” (Bnei Yisrael) becomes established in its observance of Torah, then (as we read in Yeshayah 33:12), “Nations will be like burning-sites for lime, like cut thorns set aflame.”

What is the midrash teaching? R’ Avraham Meir Rosen z”l (Warsaw; 19th century) explains: When we are mature enough as a nation to remain dedicated to Torah without having the nations remind us of our obligations, then we will be free of their persecution. Until then, the nations of the world will continue to prick us, like thorns surrounding a vineyard. (Be’ur Ha’amarim)

R’ Ben Zion Rabinowitz shlita (Biala Rebbe in Yerushalayim and Tzefat; previously rabbi of Lugano, Switzerland) writes: At first glance, Hashem does not present before man both a blessing and a curse. Rather, as the verses that follow say, “The blessing, that you listen to the commandments of Hashem . . . And the curse, if you do not listen . . .” If so, asks the Biala Rebbe, why does our verse say, “I present before you today a blessing and a curse,” implying that they are placed before us at the same time?

He explains: The Torah is teaching here a fundamental principle in serving Hashem–i.e., that there is no Middah / character trait that is entirely bad. Rather, as we read in Kohelet (7:14), “Elokim has made the one as well as the other,” and each has its place.

The Biala Rebbe illustrates: To a large degree, what motivates us to improve ourselves is seeing other people’s accomplishments and being jealous of them. Thus, if not for the Middah of jealousy, few people would develop, grow, or change themselves. This, writes the Biala Rebbe, is a proper use of that mostly bad character trait.

Likewise, one of the very worst character traits is Ga’avah / haughtiness. Nevertheless, we read about the righteous King Yehoshafat (Divrei Ha’yamim II 17:6), “His heart was elevated in the ways of Hashem,” implying that there is a type of haughtiness that is praiseworthy. What is the difference between Yehoshafat’s positive trait and the Ga’avah that is considered a despicable trait? The Biala Rebbe explains: Ga’avah means raising oneself up by putting down other people or, at least, by considering oneself greater than other people. In contrast, being aware of one’s own potential and recognizing that he is special just because Hashem created him, without comparing oneself in any way to other people, is a praiseworthy trait. Indeed, it is a trait that obligates a person to “work,” for it forces a person to say: “Since Hashem created me, He must have done so for a reason; moreover, He must have imbued me with the all the tools I need to accomplish that mission. From this, I understand how much Hashem loves me and values me. I, however, have contributed nothing to my own greatness and have nothing to feel haughty about. To the contrary, if I am not fulfilling my mission, I should be ashamed of myself.” (Mevaser Tov: Va’yigbah Libo p.5)

In our verse, “See” is in the singular form, but “you” is in the plural form. R’ Peretz Steinberg shlita (Queen, N.Y.) suggests that this alludes to the Gemara (Kiddushin 40b) teaching that one should always view the world as half meritorious and half guilty, such that his or her next Mitzvah or sin will tip the scales for the entire world. (Pri Etz Ha’chaim)

The Gemara (Chullin 63b) teaches: The Ra’ah and the Ayah are the same species of bird, whose real name is Ayah. Why, then, is it called “Ra’ah”? Because, when it is flying in Babylon, it can see (“Ro’ah”) the carcass of an animal in Eretz Yisrael!” [Until here from the Gemara]

R’ Moshe Yosef Rubin z”l (1892-1980; rabbi in Campulung, Romania, and later in Brooklyn, New York) asks: Why is such an amazing creature listed among the non-kosher birds?

He answers: The Gemara (Zevachim 113b) teaches that all those who died in the Mabul / Flood were washed into Bavel and are buried there. As such, writes R’ Rubin, Bavel is a place with plenty of carcasses of its own. If someone standing in Bavel nevertheless focuses on the “carcasses” in Eretz Yisrael, it is a sign that he is not “kosher.” This, writes R’ Rubin, is something we should reflect on before we are quick to speak ill of Eretz Yisrael and its inhabitants. Instead, in the words of Tehilim (128:5), “See the goodness of Yerushalayim, all the days of your life.” (Pardes Yosef)

“Then you shall take the awl and put it through his ear and the door, and he shall be an eternal slave to you; even to your maidservant shall you do the same.” (15:17)

R’ Aharon Lewin z”l Hy”d (the Reisher Rav; killed in the Holocaust) explains: When slavery was common, owners would brand their slaves as a sign of their ownership. Indeed, commentaries say that this is one of the reasons for the Mitzvah of Brit Milah–to create a physical reminder that Hashem is our Master. However, the Torah requires that an Eved Ivri / Jewish slave be treated with love and dignity; therefore, he may not be branded during his initial six years of servitude. But, if he says (verse 16), “‘I will not leave you,’ for he loves you and your household, for it is good for him with you,” then he has willingly forfeited his own dignity, and he is therefore branded. (Ha’drash Ve’ha’iyun)

R’ Shimshon Dovid Pincus z”l (rabbi of Ofakim, Israel; died 2001) writes: “Nipul” means falling before the King of Kings with complete submission, out of recognition that there is no one else to whom to turn. An analogy is how Queen Esther beseeched the King (Esther 8:3): “Esther spoke yet again to the King, Va’tipol / and she fell at his feet, and cried and begged him to avert the evil intention of Haman . . .”

R’ Pincus continues: The existence of this type of prayer, characterized by feeling that there is no where else to turn, does not negate the obligation of Hishtadlut / making efforts to obtain one’s needs through natural means. The mistake that people commonly make, however, is understanding Hishtadlut to mean: “I will do as much as I can, and I will rely on Hashem to fill in the gaps.” The correct understanding is: G-d decreed Hishtadlut on mankind as a punishment for Adam’s sin, but it actually contributes nothing to man’s success. Rather, everything comes from Hashem!”

R’ Pincus explains further: Among the laws of Tzedakah is that one may never turn a beggar away empty-handed. One may fulfill his obligation with a small coin, but one must give something if he is solicited directly. Another Halachah is that one is obligated in certain circumstances to provide all of a beggar’s needs. However, if it is known that the beggar is going door-to-door and is relying on many sources, then no one person is obligated to provide all of his needs.

Similarly, R’ Pincus writes, Hashem never turns a “beggar” away empty-handed. However, if we pray with the attitude that Hashem is only one of several sources from which we can obtain our needs, then Hashem responds, as in the laws of Tzedakah: “In that case, I am not obligated to provide all your needs.” Only if one views Hashem as the only source for his needs is Hashem “obligated” to respond in kind. (She’arim B’tefilah p.94)