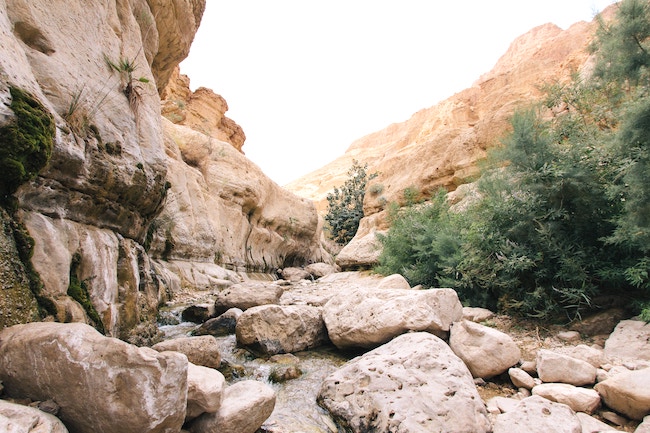 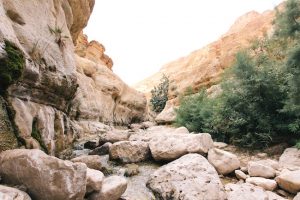 We read in this week’s Parashah (32:8), “When the Supreme One gave the nations their inheritance, when He separated the children of man, He set the borders of the peoples according to the number of Bnei Yisrael.” R’ Yerucham Levovitz z”l (Mashgiach Ruchani of the Mir Yeshiva; died 1936) writes: When we look at the natures of places, we see a remarkable thing. Every place is different–different climates, different minerals, different plants and crops, etc. And, the people who live in these places have different personalities and characteristics which somehow reflect their respective places. We tend not to view this as remarkable, for we take it for granted; indeed, it makes perfect sense to us.

In the Kinot for Tisha B’Av, we refer to Eretz Yisrael by the following terms, among others: “There the Divine Presence resides;” “the royal palace;” “G-d’s throne;” “the air of your land is the life of the soul;” “who can compare to your anointed ones, your prophets, your Levi’im, your singers?” Why aren’t these characteristics found elsewhere? Simply because G-d gave each place its unique characteristics, plants, climate, etc., and these are the characteristics He gave to Eretz Yisrael. (Da’at Torah p.130)

R’ Avraham Yitzchak Hakohen Kook z”l (1865-1935; Ashkenazic Chief Rabbi of Eretz Yisrael) writes: We have a tradition that there will be a spiritual revolt in Eretz Yisrael and among the Jewish People in the very era in which the national life of our People reawakens. The reason is that the material tranquility that part of our nation will experience will lead it to believe that it already has attained its ultimate goal. This will cause the soul to become smaller, so-to-speak. Yearning for lofty and holy ideals will cease, and, as a natural consequence, the spirit will sink. Eventually, a storm will come and cause a revolution, and then it will be apparent that Yisrael’s strength lies in the Eternal Holy One, in the light of His Torah, and in the desire for spiritual light. (Orot p.84)

“He will say, ‘I shall hide My face from them and see what their end will be–for they are a generation of reversals, children in whom there is no confidence. They provoked Me with a non-god, angered Me with their [things that were] nothing; so I shall provoke them with a non-people, with a nation that is no nation I shall anger them’.” (32:20-21)

R’ Avraham Saba z”l (1440-1508; Spain and Portugal) writes: Hashem says in these verses, “I want to hide My face from them as if I don’t see what’s going on because they act like children who are inconsistent. I wish, so-to-speak, to see how far they will go–‘what their end will be’–for they are a ‘generation of reversals,’ constantly changing their deeds. They are children in whom there is no confidence [i.e., no truth], for they don’t maintain one position for very long. Maybe they will yet regret their deeds. Maybe, just as they abandoned Me for other gods, they will abandon those other gods and return to Me.”

But, G-d continues, they didn’t do that. “They provoked Me with a non-god, angered Me with their [things that were] nothing; so I shall provoke them with a non-people, with a nation that is no nation I shall anger them.” Hashem responds measure-for-measure. This, writes R’ Saba, is a recurring theme in our parashah. For example, Hashem gives us wealth so that we may study Torah in comfort, but, instead, we allow the wealth to cause us to rebel and forget G-d, as we read (verse 15), “Yeshurun became fat and kicked. You became fat, you became thick, you became corpulent–and it deserted Elokah its Maker, and was contemptuous of the Rock of its salvation.” Therefore, we read (verses 23-24), “I shall accumulate evils against them, My arrows shall I use up against them: bloating of famine. . .” The parashah continues (verse 29), “Were they wise they would comprehend this, they would discern it from their end.” We possess enough wisdom to discern that our troubles follow from our sins. (Tzror Ha’mor)

Siddur Avodat Yisrael cites a custom to recite Psalm 71 on the Shabbat on which Parashat Ha’azinu is read. Accordingly, we present here verses from, and commentaries on, that Psalm.

“In Your righteousness rescue me and deliver me; incline Your ear to me and save me.” (Verse 2)

Midrash Shocher Tov comments: The Jewish People say to Hashem, “When you rescue us, do not do it because of any righteousness or good deeds that we possess. Rather, be it today or tomorrow, rescue us in Your righteousness.” [Until here from the Midrash]

“Do not cast me off in time of old age; when my strength fails, do not forsake me.” (Verse 9)

R’ Moshe Chaim Ephraim of Sudilkov z”l (1748-1800; Ukraine) writes in the name of his grandfather, R’ Yisrael z”l (1698-1760; the Ba’al Shem Tov, founder of the Chassidic movement): This is a prayer that our spiritual growth never become “old,” that it never weaken, as the physical body does with old age. Rather, we pray, it should remain “alive” with newness. (Quoted in Asifat Amarim)

“And even until old age and hoariness, Elokim, do not forsake me; until I proclaim Your strength to the generation, Your might to all who will yet come.” (Verse 18)

R’ Yehuda Aryeh Leib Alter z”l (1847-1905; second Gerrer Rebbe) writes, based on a Midrash: This verse is teaching that when a Torah scholar becomes old and no longer can perform Mitzvot with strength and Zerizut / alacrity as he did in his youth, he should devote himself to teaching others how to serve Hashem. (Sfat Emet Al Tehilim)

Iyov was complaining about his suffering, but when he saw that the third wall of a sukkah need be only one Tefach / handsbreadth wide, he immediately felt better. (Midrash Pli’ah)

R’ Zvi Elimelech Shapira z”l (rabbi of Oleszyce, Galicia and other towns; died 1841) explains: We read in Tehilim (39:6), “Behold like hand breadths You made my days.” This teaches that the dimensions of the Sukkah (which are measured in Tefachim / hand breadths) allude to the types of activities that man engages in during his life. How so?

Man’s activities can be divided into three categories: Tov / that which is good for him; Mo’il / that which is helpful to him; and Areiv / that which is desirable to him. Man may engage in the first two categories as much as he wants, writes R’ Zvi Elimelech, but the third category should be used only as necessary.

In order to successfully limit his participation in the third category of activities, man must realize that his life in this world is fleeting. This is alluded to by the Sukkah, which must be at least 7 Tefachim wide by 10 Tefachim high (approximately 28 inches by 40 inches). After Yom Kippur, when man has repented, he moves into the flimsy Sukkah to demonstrate his awareness that during the seventy (7×10) years of his life, he should not feel at home in this world, but rather like a traveler passing through.

When Iyov learned this lesson, it made his suffering easier to bear. Once one recognizes that this life is only a way station, he does not expect it to always be comfortable or pleasant. (Bnei Yissaschar: Ma’amarei Tishrei 10:19)

Why is it sufficient for a Sukkah to have only three walls? After all, the sukkah commemorates the Clouds of Glory which surrounded Bnei Yisrael in the desert, and they made four walls!

One answer is that we need an opening to leave the “Clouds of Glory” in order to earn a living. The generation of the Exodus did not have that need.

When Iyov lost all of his wealth, he was upset with himself. Why had he bothered? Why had he not devoted his whole life to learning Torah instead? But when he saw that the Sukkah has only three walls, he realized that Hashem intends for some people to leave the Bet Midrash and work. This made him feel better. (Binat Nevonim)