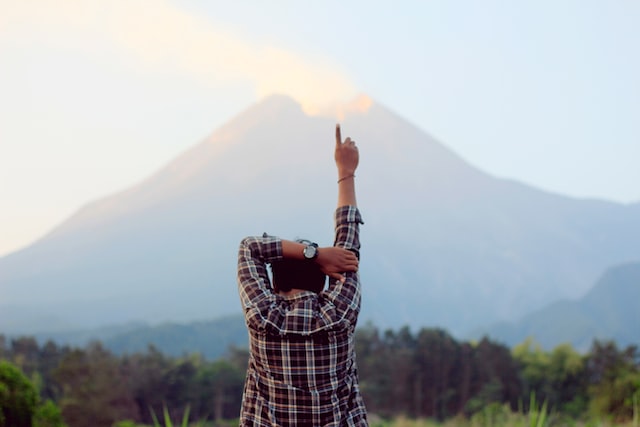 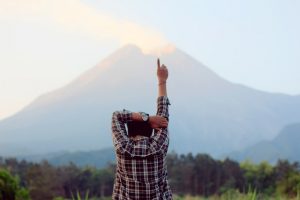 This week’s Parashah tells us (28:9), “You shall walk in His ways,” teaching that a person, through his good deeds, actually can walk in Hashem’s footsteps. R’ Eliezer Zvi Safran z”l (1830-1898; Komarno Rebbe) observes, though, that most of us do not believe this–that is, we don’t believe in our own spiritual potential.

For example, how often do we pray, and, when we see that we aren’t answered, we assume that our prayers can’t really make a difference? R’ Yisrael Ba’al Shem Tov z”l (died 1760) teaches that this is the result of excessive self-deprecation. One must believe that his prayers have untold consequences in the Heavens, even if he doesn’t see those effects. If one believed this, the Komarno Rebbe adds, how joyously would he pray! How carefully would he pronounce every letter, every syllable!

If one believed that he is (in the words of Bereishit 28:12) “a ladder standing on the ground with its head in the heavens,” that every movement, every word, every step and every business deal makes a spiritual impact on the world, he would do them all for the sake of Heaven. Also, the Zohar comments, “If people knew the love with which Hashem loves the Jewish people, they would, so-to-speak, roar like lions in their eagerness to follow Him.”

On the other hand, if one thinks that he can’t make a difference, he should know that he is on the road to heresy. If he thinks that way, it is a sign that the Yetzer Ha’ra has succeeded with him and will soon deprive him of life in this world and in the next.

Rather than despair, one can learn from Yaakov, who said (Bereishit 35:5), “I lived with Lavan and I delayed until now.” The letters of “Lavan” are the reverse of the letters of “Naval”/ “degenerate one,” a reference to the Yetzer Ha’ra. Why was Yaakov successful in turning around the “Naval,” and “whitening” it (from “Lavan” / “white”)? Because “I delayed until now,” that is, because he did not expect immediate results from his prayers and Mitzvot, but rather had faith that the results would come with time. (Zekan Beto, p.216)

“You shall come to whomever will be the Kohen in those days, and you shall say to him, ‘I declare today to Hashem, your Elokim, that I have come to the Land that Hashem swore to our forefathers to give us’.” (26:3)

Rashi z”l comments: “You must declare that you are not ungrateful.”

In light of this question, R’ Nesher writes, we must reject our initial understanding. Apparently, not being ungrateful is something to be proud of. The reason for this is that being ungrateful is part of the human condition, so that a person who is not ungrateful has lifted himself above the human condition, above nature. Our first ancestor, Adam, was ungrateful, a trait he exhibited when he said (Bereishit 3:12), “The woman that You gave to be with me–she gave me of the tree, and I ate.” In effect, Adam rejected all the gifts that Hashem had given him, including a wife, and blamed Hashem for his own (Adam’s) downfall.

R’ Nesher continues: From the earliest time in Gan Eden, when angels prepared Adam’s food, man has lived with the attitude, “It’s coming to me!” The Mitzvah of Bikkurim / First Fruits, the subject of the first section of our Parashah (including our verse), is meant to teach a person that nothing is coming to him. After a person toiled in his field, vineyard, or orchard for an entire season, the Torah commands him to give the first fruits to the Kohen, as well as to give other portions to Kohanim, Levi’im and the poor. A person who successfully performs the Mitzvah of Bikkurim can rightly proclaim: “I am not ungrateful!” (Haggadah Shel Pesach Shir Tziyon p.10)

R’ Alexander Ziskind of Horodna z”l (1739-1794; Belarus) comments: Do not think that the Mitzvot are a burden, like a decree that a master imposes on his servants. To the contrary, because of Hashem’s immense love for us, He has given us a great, priceless gift. (Yesod V’shoresh Ha’avodah: Introduction)

R’ Yosef Yozel Horowitz z”l (1847-1919; the Alter of Novardok) writes: The “sight of your eyes” that will drive a person mad–i.e., confuse a person–refers to seeing one’s own good qualities. He explains:

The Gemara (Bava Batra 78b) teaches that the key to controlling one’s Yetzer Ha’ra is performing a Cheshbon Ha’nefesh / self-assessment (literally, “accounting of the soul”). Everyone performs assessments and accountings, the Alter notes: They balance their checkbooks and decide what purchases they can afford or not afford; they take their temperatures and decide whether they need medicine; etc. Yet, most people find it difficult to perform a Cheshbon Ha’nefesh / an accounting of their behavior and thoughts. Why?

He answers: It is easy to recognize a Rasha / wicked person. Most people have no trouble avoiding people or behaviors that are undeniably wicked. However, if the wicked person wears the garb, has the mannerisms, and speaks the language of a Talmid Chacham / Torah scholar, the danger he presents is enormous. Such a person is difficult to recognize for what he really is.

Similarly, if an otherwise observant Jew has a regular yearning for one particular non-kosher dish, he will have no trouble recognizing that as a failing. Even if he cannot control it, he will make sure that it does not affect other areas of his observance. Generally, however, people are not accustomed to looking at their good qualities and bad qualities separately. Instead, they weave their good qualities and bad qualities into one “picture” of themselves. They combine black and white to create gray, rather than addressing the black and the white separately. Worse yet, they alter their view of what is good to accommodate their failings. In this sense, being aware of their own good qualities has driven them “mad.”

Some bad qualities may seem very insignificant, the Alter notes. However, if one takes a valid one dollar bill and adds a zero–i.e., nothing–to the denomination, the result is equivalent to a counterfeit ten dollar bill. So, too, even minor bad qualities that are woven into a good lifestyle can create a corrupt lifestyle. What is the source of this mistake? It is that most people see righteousness and wickedness as absolutes, not appreciating that there are an infinite number of levels between a Tzaddik and a Rasha. Thus, one who sees himself as essentially righteous thinks he has nothing to worry about. But he is wrong, writes the Alter. A person is always on a slope, either going up or going down. Every bad quality takes a person at least one step down the slope, farther from being a Tzaddik and closer to being a Rasha. That is why no bad quality should be ignored. (Madregat Ha’adam p.136)

While the agricultural aspects of the Shemittah year apply only to the land and produce of Eretz Yisrael, the Mitzvah of Shemittat Kesafim / releasing loans applies between Jews anywhere in the world.

R’ Moshe ben Maimon z”l (Rambam; 1135-1204; Spain and Egypt) writes: When the Sage Hillel the Elder saw that people were refraining from making loans and were thereby transgressing the prohibition [Devarim 15:9], “Beware lest there be a lawless thought in your heart, saying, ‘The seventh year approaches, the remission year,’ and you will look malevolently upon your destitute brother and refuse to give him,” he established the Prozbol so that loans would not be released. The Prozbol is effective only in our times when forgiving loans is required only by rabbinic decree. A Prozbol has no effect when releasing loans is required by Torah law. . .

The following is the text of the Prozbol: “I submit to you, so-and-so and so-and-so, the judges of such-and-such a place, that I may be permitted to collect any loan that I have outstanding at any time that I wish.” (Mishneh Torah, Hil. Shemittah Ve’yovel 9:16-17)

R’ Binyamin Yehoshua Zilber z”l (1916-2008; Israel) writes: The Torah states (Devarim 15:3), “Over what you have with your brother, you shall remit your authority.” Once a loan is handed over to Bet Din to collect on one’s behalf–which is what a Prozbol accomplishes–“you” are no longer collecting from “your brother,” and there is no prohibition. Some understand this as the P’shat / straightforward meaning of the verse, and hold that a Prozbol would be effective even when the Mitzvah of Shemittat Kesafim applies according to Torah law. Others, such as Rambam (quoted above), understand this interpretation of the verse as a mere Asmachta, a hint in the Torah to a law that the Sages would later institute.

Ideally, R’ Zilber writes, a Prozbol should be completed in the presence of three Torah scholars who are familiar with the laws of Shemittah. However, if it was written in front of three laymen, it also is valid. (Brit Olam: Shevi’it 10:65, 68)