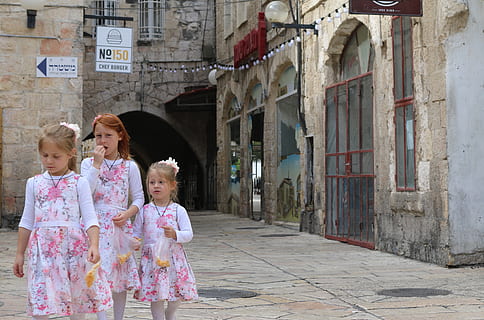 The translation does not do justice to the complexity of the Hebrew text. The identical word vehorashtem inelegantly becomes first “you shall drive them out,” and then “you shall possess.”[3]

With trepidation for the Rishonim, I will suggest yet another approach: the second vehorashtem does not indicate possession so much as bequeathing, or causing others to possess. The Torah relates how the Land should be passed on to the next generation.

First the Torah warns those who are about to enter the Land and conquer it. It instructs them to be zealous about the task in front of them. The irredeemably evil inhabitants of the Land cannot be allowed to stay and coexist with the Am Hashem. Their immorality should not be perpetuated even as a memory; their pagan temples must be destroyed. Should the Land not be purged of their evil, your children will be put at risk. While you may remain uninfluenced by it, that may not be true of your children. Their commitment to your mission will be eroded; they will not follow entirely in your ways. When you leave this world, you will pass it along to them and they will settle it.

But that is not My intention! I wish that “you shall settle it, for to you I have given the Land.” When children follow in the ways of their parents, it is as if the parents have not died! As Chazal say,[4] “a son bestows merit upon his father.” When children are of the same mind as their parent, they continue to make use of what the father amassed. They use his estate for the same worthy activities that the father did during his lifetime. The father therefore continues to make use of his possessions even after his death. The Land that you will bequeath to your children can indeed be your land; it is you who shall settle it, not just the generation after. This will happen, however, only if you do your part in firming up your resolve in your children. You must provide the proper atmosphere for the development of your children by first driving out the pagan occupants of the Land.

Chazal teach[5] that a tzadik is sometimes taken from us because of the sin of this generation. Know this, however: the tzadik only dies as a result of this when his generation departs from his ways. When they are faithful to his teaching, he doesn’t really die, because his spirit is still a moving force in their lives, even when he is taken from this world.

This was Haman’s mistake in delighting that his lottery for destroying the Jews had picked the month of Adar, or the time of Moshe’s death. He overlooked the fact that Adar 7 was also his birthday. This means that the day of his death was really the beginning of a new kind of life for him, even greater than the previous stage. After Moshe’s passing, he would continue to live! Moreover, each year his neshamah would be elevated to still higher planes – affording even more merit to his descendants. Haman’s plans were therefore foiled. Many centuries after his death, the Bnei Yisrael still held firmly to Moshe’s teaching, and were therefore entitled to share his merit.

Why, then, wasn’t Tisha B’Av prevented through the zechus of Aharon – who died on Rosh Chodesh Av, as we see in the parshah?[6] The explanation lies in another puzzling remark of Chazal.[7] “Yerushalayim was destroyed only because of sinas chinam.” Really? Don’t we know of other serious transgressions that the generation of the churban committed? We can explain that sinas chinam was the polar opposite of what Aharon, the rodef shalom, stood for. By distancing themselves from Aharon’s message, they placed his merit out of reach, allowing midas ha-din to target them for all their other aveiros.

Indeed, Yerushalayim was destroyed only because of sinas chinam!