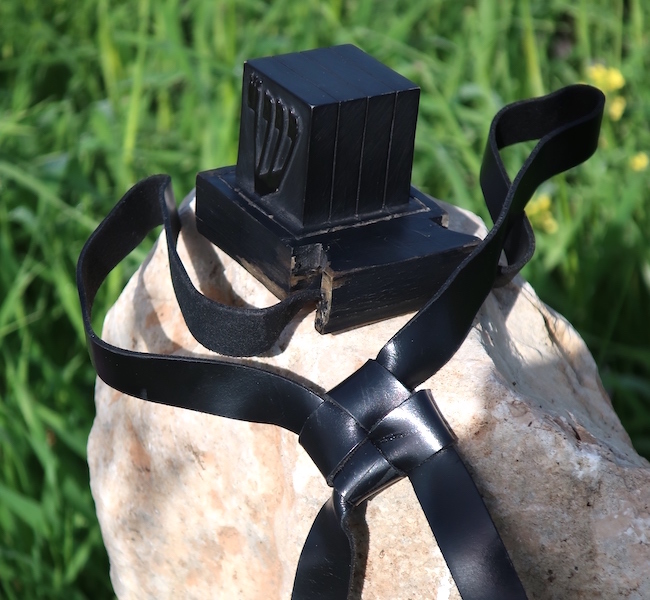 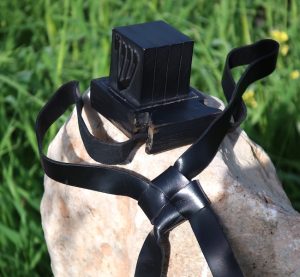 This week we read the parsha of Ki Tisa. After receiving the Torah, Bnei Yisroel {the Children of Israel}, thinking that Moshe had died, sought to fill that void by creating an intermediary between them and Hashem. This led to the Chait Ha’egel {the sin of the golden calf} and near disaster for Bnei Yisroel until Moshe succeeded in interceding on their behalf.

A fascinating result of Moshe’s t’filos {prayers} was the bringing about of an ‘ais ratzon’–a time where Hashem seemed to be very willing to grant Moshe’s wishes. Moshe sensed this willingness on the part of Hashem and petitioned Him on behalf of Bnei Yisroel.

That explains it! No more problems in understanding the world’s seeming injustices!

And just in case that doesn’t do a thorough enough job of leaving us in the dark, Rashi quotes the Talmud [Brachos 7A] that teaches that Hashem showed Moshe the knot of His tefillin {phylacteries}.

Now it’s perfectly clear! You see it wasn’t actually Hashem’s back but rather it was the knot of His tefillin! Thanks!

The Talmud [Brachos 6A] shows the source from which we derive that Hashem wears tefillin and reveals that His parchments contain the verse: “Who is like your people, Israel, a unique nation on the earth. [Divrei Hayamim I 17]”

How are we to understand the idea of Hashem wearing tefillin, what is the significance of the verse written in those tefillin and how does this relate to Moshe’s difficulty in understanding Divine Providence?

Rav Aryeh Kaplan z”l explains in the following way. Being that Hashem has no body, shape or form, any physical terms used in relation to Hashem come to express His relationship to the world. His ‘eyes’ become His awareness; His ‘arm’ is understood to convey His power and involvement.

What do His tefillin express?

The Divine wisdom that manifested itself in the creation is astounding. Hashem’s tefillin represent His purpose and will in the creation. As such, we understand that the knowledge that Hashem wears tefillin without knowing what is written on His ‘parchments,’ would still leave us very much in the dark.

The Talmud relates that Hashem’s tefillin contain a verse about the uniqueness of Yisroel. The tefillin thereby show that Hashem’s purpose and will in creation is intimately bound to and manifested by Yisroel.

As we understand, Hashem created the world as a vehicle upon which He could bestow His good. The greatest good that He could bestow is He Himself, as He is the epitome of good. Those who would be the recipients of this good would have to freely choose to make this connection to Hashem and instructions would have to be available as a means through which they could partake of the G-dly. Lastly, a people would have to accept these guidelines, to structure their entire lives according to these instructions, and thereby ultimately receive Hashem’s goodness.

Many nations roamed the earth but it was a few select individuals who forged this connection to Hashem. It was only Yaakov, the third generation, who attained the name Yisroel. His descendants as a whole only attained that stature and name upon the exodus from Mitzrayim {Egypt}. By virtue of their free will, they became Yisroel, the Torah {instructions} of life were entrusted to them and the crown/purpose of creation would be fulfilled through them.

All events that happen in this world are all focused on reaching that ultimate goal of connection to Hashem and partaking of His G-dliness. The straps that emanate from the tefillin emanate to the right and the left. They represent the two opposing forces of Hashem’s Providence–chessed {kindness} and gevurah {strength}. These forces join together and form the structure of Hashem’s justice. This is represented by the knot of the tefillin–the point where the two join together. The straps then hang down, showing the involvement of this Divine intervention and supervision all the way down through history.

In the intertwining of a knot, some straps are revealed and others are covered. Moshe was troubled by the seeming injustice in the world. Hashem showed him that nothing is haphazard. Nothing happens by chance. Every event is the practical application of the Divine will and purpose. As such, every event is justice as it is comprised of the union of chessed and gevurah.

Hashem showed him the knot of his tefillin.