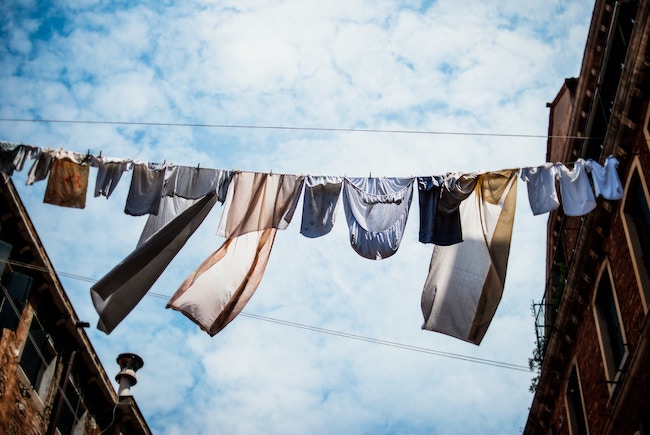 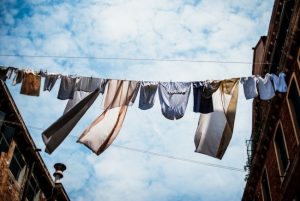 Laundering garments is prohibited on Shabbos for it is a toladah of one of the thirty-nine Shabbos Labors, Melaben, Bleaching. While laundering usually entails the use of water and/or cleaning agents, removing dirt from a garment even without them may also fall under the halachic prohibition of Laundering. It is this type of Laundering which is the subject of our discussion.

Removing dust or dirt particles from a garment

There is a dispute among the Rishonim whether or not removing dust or other dirt particles from a garment is considered Laundering. Some hold that removing any speck of dirt from a garment, even if it is not absorbed into the fabric of the garment but is merely lying on its surface [like a feather or a loose thread], is Biblically forbidden since the garment is being transformed from “dirty” to “clean.”[1] A second opinion maintains that removing any dirt, whether it is absorbed into the fabric [like dust] or not, is totally permitted, since a dusty garment is not considered dirty and removing the dust is not considered Laundering[2]. A third, middle-of-the road view, holds that only dust which is trapped between the fibers of the fabric may not be removed, while dirt which lies on the surface, may[3].

The basic halachah follows the middle-of-the-road opinion[4], forbidding one to remove dirt that has been absorbed into the fabric[5] while allowing one to remove a feather or a loose thread that has landed on the garment[6] [using one’s hands or a soft, dry cloth; a brush may not be used(7 )]. Accordingly, one should be careful not to let his clothing fall on the ground and get dusty so that he does not come to desecrate the Shabbos[8]. If, however, one’s clothes should get dirty from dust, there is a mitigating factor which may permit removing dust from a garment:

Question: Can anything be done to a dusty garment [that is significantly dirty] whose owner has no other suitable clothing and is embarrassed to be seen publicly in such a dirty garment?

Discussion: The poskim permit one to ask a non-Jew to remove the dust[13]. While generally one may not ask a non-Jew to do anything that a Jew is not permitted to do on Shabbos, in this case he may, since as stated above, there are opinions that maintain that it is even permitted for a Jew to remove dust from a garment on Shabbos. [It is questionable, however, whether one may instruct the non-Jew to use a brush(14). ]

Removing a stain from a garment

Halachically speaking, there are two types of stains: 1) a wet stain which is absorbed into the fabric of the garment, e.g., a ketchup stain, and 2) a stain which is made when a piece of dirt or food falls on a garment and hardens there. There are different rules for each of these stains.

A wet stain which is absorbed into the garment:

It is strictly prohibited to remove on Shabbos a stain which is absorbed into the fabric and can be removed only with water or a cleaning agent. This is the classic Biblical prohibition of Laundering. Even if the stain is so insignificant that the owner will not be deterred from wearing the garment because of it, it is still strictly forbidden to remove it with water or any other cleaning agent.

Dirt which adheres to the garment’s surface

A stain which results from dirt or food that has attached itself to a garment can also be removed if it will be only partially removed or when it is “insignificant,” as explained earlier[17]. It can be removed either by scratching it off or by rubbing the reverse side of the material until the dirt is dislodged.

There is, however, one notable difference between this type of stain and the wet stain which became absorbed into the fabric of a garment. The removal of a dry stain is subject to the laws of Grinding, a forbidden Shabbos Labor. If the dirt or food has dried or hardened, then scratching or peeling it off will cause it to crumble, which is a rabbinical violation of the prohibition against Grinding. Therefore:

[1] Sefer ha-Zichronos, quoted by Magen Avraham 302:4. [2] Tosafos, Shabbos 147a and many other Rishonim. [3] Rashi, Shabbos 147a, as explained by Rama and Beiur ha-Gra 302:1, and other Rishonim. [4] Rama, Shulchan Aruch Harav and Aruch ha-Shulchan strongly recommend that one be stringent and follow this view [but do not absolutely require it]. Chayei Adam and Mishnah Berurah, however, are of the opinion that the basic halachah is in accordance with this view and one may not be lenient. [5] In theory, there may be some dust which lies completely on the surface of the garment and is not absorbed into the fabric. In practice, however, this is almost impossible to determine. [6] A minority view rules like the first opinion that even feathers and threads are prohibited: Magen Avraham, quoted by Chayei Adam 22:9 and Kitzur Shulchan Aruch 80:39; Ben Ish Chai, quoted by Kaf ha-Chayim 302:11. See also Aruch ha-Shulchan 302:9, who rules according to this view in the unlikely event of a person who is reluctant to wear a garment because of the feathers, etc. [7] Beiur Halachah 302:1. [8] Mishnah Berurah 302:6. [9] It remains questionable whether or not another person [who is bothered by the dirt] can clean the garment if the wearer himself is not particular; Beiur Halachah 302:1 (s.v. v’hu). See Shulchan Shelomo 302:2-2. [10] This is determined by assessing the individual wearer’s willingness to wear a dusty garment on weekdays, even if he would not wear it on Shabbos, Yom Tov or other special occasions; Rav S.Z. Auerbach (Shemiras Shabbos K’hilchasah 15, note 89 and Tikunim u’Miluim). [11] While this is sometimes difficult to determine, there are two general guidelines to follow: 1) One would normally be reluctant to wear dark (black or dark blue) clothes which are dusty, but not brightly colored clothing; 2) One would normally be particular not to wear new, or freshly laundered clothes which are dirty, but would be less particular if the clothing were obviously worn or faded. [12] Mishnah Berurah 302:36 and Beiur Halachah 302:1 (s.v. yeish) and 7 (s.v. d’havi). [13] Mishnah Berurah 302:6. [14] Since this may be prohibited according to all views. If the non-Jew uses the brush on his own, to make his job easier, he need not be stopped. [15] Misgeres ha-Shulchan on Kitzur Shulchan Aruch 80:80, quoted by Minchas Shabbos 80:143. See Beiur Halachah 302:1 (s.v. lachush), who seems to rely on this only when the garment is clearly not new or newly pressed. See also She’arim Metzuyanim b’Halachah 80:36, who disagrees with this leniency. [16] Entire section based on the view of the Mishnah Berurah 302:11 and 36, and Beiur Halachah (s.v. d’havi). This is also the view of Da’as Torah 302:7. There are, however, poskim who are more lenient and allow a stain to be removed even when it will be completely removed, as long as it is not scrubbed vigorously; see Aruch ha-Shulchan 302:9; Ketzos ha-Shulchan 116:3. [17] See previous note that other poskim are more lenient and permit removing stains as long as they are not scrubbed vigorously. [18] O.C. 302:7. [19] See Rama 321:12. [20] See Shemiras Shabbos K’hilchasah 6:9 and 15:28. [21] Mishnah Berurah 302:36 and Sha’ar ha-Tziyun 44.