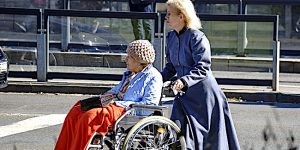 The sensitivity that one must have in performing the mitzvah of kibbud av v’eim, honoring one’s parents, is expressed in our Sages’ comment on the verse quoted above. The Rabbis[1] criticize Yosef for not objecting to hearing his revered father described as “your servant, our father.” Even though Yosef was not at liberty to reveal his identity at the time, he is nevertheless faulted for not being offended by the desecration of his father’s honor. This teaches us that it is not enough to merely honor and fear one’s parents in their presence. Even when they are not physically present, we are commanded to see that their honor is not compromised in any way. Let us explain:

There are two major categories under which the halachos of conduct towards parents are subsumed: kibbud, honoring them, and mora, revering them.

1.Through the children’s thoughts—children are supposed to view their parents as being honorable and respected people, even if they are not considered as such in the eyes of others. This attitudinal aspect of the mitzvah is the main part of kibbud[2].

2.Through the children’s actions—this includes feeding, dressing and escorting them, and generally assisting them in all of their needs as a servant would do for his master. These actions must be done b’sever panim yafos, pleasantly and enthusiastically. The manner in which one assists parents is a crucial aspect of the mitzvah[3]. Even if the child is in the midst of learning Torah, he must stop to assist his parents[4].

3.Through the children’s speech—e.g., when a child is honored, he should credit his parents for the honor bestowed upon him. When a child asks others to grant his request or to do him a favor, he should not request it in his own merit, but rather, in the merit of his father or mother (when applicable[5]).

Parents may excuse[6] their children from the mitzvah of kibbud. In fact, it is advisable for them to do so. A parent who constantly exacts respect from his children will surely cause his children to be punished on his account[7]. Consequently, although according to the halachah[8] a child should rise to his full height when a parent enters[9] the room[10], in practice this halachah is not widely observed. It is safe to assume that most parents excuse their children from demonstrating this honor towards them[11], and since they do, the children are not obligated to rise in their honor[12]. It is required though, that children ask their parents explicitly if they excuse them from demonstrating this kibbud[13].

Reciting Kaddish after a parent’s death falls into the category of kibbud[14]. Consequently, some poskim rule that a parent may excuse his child from saying Kaddish after his passing[15]. But other poskim hold that the son should ignore his father’s request and recite Kaddish[16].

The second category of the halachos governing the conduct of children to parents is mora, reverence, or fear. It means that one should act towards his parents as he would towards a sovereign with the power to punish those who treat him disrespectfully[19]. Specifically, this commandment prohibits a child from sitting in his parents’ set places at home or in shul, interrupting them, contradicting them (in an abrupt or disrespectful manner) and calling them by their first names[20].

Most poskim maintain that parents may also excuse their children from the mitzvah of mora[21]. Consequently, some parents permit their children to sit in their father’s place in shul, since parents are not particular about this show of respect[22]. Similarly, if a parent solicits his child’s opinion, the child may express his honest opinion even if it differs from the parent’s[23], since by soliciting his child’s opinion the parent waives his right not to be contradicted.

Parents may not, however, allow themselves to be degraded, hit or cursed by their children. Such actions are never excusable[24].

Even if a parent is, G-d forbid, insane and has embarrassed the child in public, it is still forbidden for the child to shame or degrade the parent[25]. He may, however, take steps to ensure that his parents do not cause him or themselves public embarrassment, e.g., one may arrange to have his parents barred from a public gathering, etc[26].

When an elderly father lives with his son, the son is not required to give up his seat at the head of the table[27], although the custom in many homes is to do so[28]. In any case, the son must allow his father to wash his hands first and to be served first[29], etc.

A son should preferably not daven Shemoneh Esrei within four amos [approximately eight feet] of his father[30].

If her husband objects, a married woman is not required to honor her parents by performing the physical acts that constitute “honor,” such as feeding them, escorting them, etc. She is, however, obligated to revere them and to avoid demeaning them[31].

In general, children should honor a parent’s wish even if the parent does not “benefit” from the child’s compliance. For instance, a mother disapproves of a certain article of clothing and asks her daughter not to wear it. By honoring her mother’s request the daughter gives her mother no tangible, material benefit, so the laws of kibbud do not apply[32]. But if the daughter disobeys and insists on wearing that article of clothing, she is violating her mother’s wishes which may be forbidden under the obligation of mora, reverence[33].

Still, the poskim are in agreement that when the parent’s request will cause the child a financial loss, significant pain or anguish, or will interfere with the child’s Torah studies, the child need not obey. A child is not considered to have violated his parent’s wish when he does so for a legitimate reason (and the parent does not stand to gain any material “benefit” from the child’s compliance). Thus there are many cases when children may not be halachically required to follow a parent’s directive. Some of those include when and where to study Torah[34] or daven[35], whom to marry[36] and whether or not to live in Eretz Yisrael[37].

Obviously, though, a child should realize that it is invariably in his best interest to heed the wise and loving advice of his experienced parents. A decision not to abide by a parent’s wishes should be made only after much thought and after consultation with a competent halachic authority.

6. The parents may change their mind and revoke their dispensation; Maharam Shick, Y.D. 218.

12. Even when parents have exempted their children from honoring them, if the children honor them they are fulfilling a mitzvah; Rav Akiva Eiger and Pischei Teshuvah, Y.D. 240:16.

28. She’arim ha-Metzuyanim B’halachah 143:2. Rav S.Z. Auerbach, Rav Y.S. Elyashiv and Rav C.P. Scheinberg are quoted (Mora ha-Horim v’Kibbudam, pg. 19; Kibbud v’Yiras Horim K’hilchasam, pg. 62) as ruling that it is proper for the son to offer his seat to his father. If the father declines, then the son may sit there.

32. This is the position of most poskim; see The Fifth Commandment, pg. 126, for the entire list.