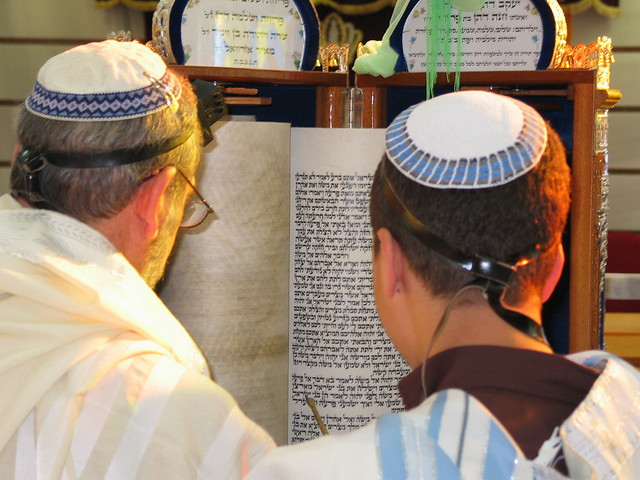 The phylacteries contain four sections of the Torah: “Sanctify to Me…”,1 “When Ha-Shem brings you…”,2 “Hear, O Israel…”,3 and “If you listen…”.4,a They must be written in Hebrew in black ink on parchment (the outer layer, on its inner side) from a permissible animal or bird.b In the head phylactery they are written on four separate pieces of parchment; in the arm phylactery, on a single piece.c These are rolled up, wrapped in cloth and hair, and placed in square leather boxes which are sewed with sinews onto bases through which black straps are passed.d

The head phylactery is placed just above the hairline centered between the eyes [as it says “And they shall be as badges between your eyes”]5; the knot of its strap is at the base of the skull above the back of the neck. The arm phylactery is fastened to the left biceps opposite the heart, as it says “And these words shall be on your heart […and you shall tie them on your arm as a sign]”6; but a left-handed person puts it on his right arm.f The arm phylactery is put on first and taken off last.g The phylacteries should be worn only in the daytime and especially during prayers; they are not worn on sabbaths or festivals.h One who wears them must keep his body covered and clean and must keep his mind on them constantly.i

The mezuzah contains the sections “Hear, O Israel…”3 and “If you listen…”,4 written on ruled lines on parchment (preferably the inner layer on its outside, and on a single piece); this is rolled up, placed in a container, and fastened to the doorpost [as it says “And you shall write them on the doorposts of your house”7].j It is placed at least two-thirds of the way up the doorpost on the right-hand side as one enters (in the case of a door between two rooms the hinge side is regarded as the inside).k It is required only on doorways at least ten handsbreadths high that have two doorposts, a lintel, and a door; the doorway must lead to a room at least four by four cubits in size which has a roof and is used as a dwelling.l

The Torah must be written on ruled lines on parchment (the entire skin on its outer side, or the outer layer on its inner side). The sheets of parchment are joined by sewing with sinews and the first and last sheets are sewed to wooden rollers.m The letters must be legible and must not touch one another (and similarly for the phylacteries and mezuzah) and the proper spaces must be left between sections.n If any of these conditions is not met one may not read from that Torah in public; and if a Torah contains many errors they must be corrected or it must be buried.o The Torah is very holy and must be treated with great respect.p

Every Jew is commanded to write a Torah for himself, as it says “And now write this song for yourselves” — i.e., the Torah that contains this song8; if he does not know how, others may write it for him. The king is commanded to write an additional Torah for himself which he must keep with him at all times, as it says “And when he sits on his royal throne he shall write for himself a second Torah… and it shall be with him and he shall read in it all the days of his life”.9,q