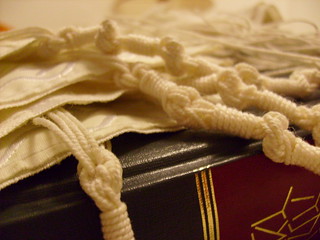 If a man puts on a garment having four corners during the day he is commanded to put fringes (tzitzis) in its corners, as it says “And they shall make themselves fringes on the edges of their garments”1 [and it says “You shall make tassels on the four edges of the garment with which you cover yourself”2]. A righteous man should endeavor to wear a garment that requires fringes, especially during prayers, since the Torah makes all the commandments depend on the commandment about the fringes, as it says “And you shall see it and remember all the commandments of Ha-Shem“.3,a

The garment must be made primarily of cloth; if it is of any material other than wool or linen the commandment is only rabbinical. The fringes may be of wool, of linen, or of the same material as the garment; but one should not use wool in a linen garment or vice versa because it is forbidden to wear mixtures of wool and linen.b Each fringe is made of four threads and is passed through a point between one and three thumb-breadths away from the corner of the garment so that the eight ends of the threads hang evenly from the corner and are at least four thumb-breadths long; one of the threads is wound around the others and knotted.c If possible, one of the threads (which must be of wool) should be dyed with a special blue dye, as it says “And they shall put on the fringe a blue thread”1; the other threads should be of the same color as the garment.d