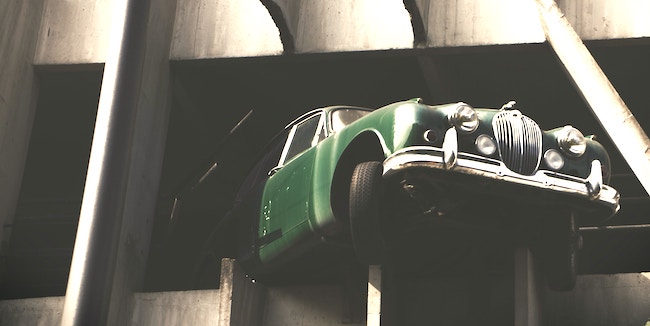 My friend’s wife went to a doctor’s office, and the parking lot was full. Someone had parked a car right in the middle of two spaces, making it impossible for someone to park on either side of their parked car. My friend’s wife tried to park in the narrow space next to this car anyway, and scratched the parked car slightly. Should she leave a note with her phone number, or did the person “bring it on himself” for being selfish in the way he parked, making it unnecessary to leave a note?

It’s a close call. There is a halacha (Jewish law) that if someone hems you in, you’re allowed to get out, even if it will cause damage to the other person: Meshaber v’nichnas meshaber v’yotzei (“breaking going in, breaking going out”). If someone fills up my driveway with bottles -this is a case in the Talmud – and I have to drive out, I could just drive out and crash across the bottles, or sweep them away. Nobody has the right to blockade the public domain, or my own domain, and you’re allowed to push a blockade out of the way, even if it causes damage.

So there may be some justification for cutting into that space, given the fact that the person sort of blocked my access to it, but I don’t think it’s the same thing. It’s not so straightforward. If they denied my access to the public domain, I’m allowed to force my way out. If the other car had been parked at the entrance to the parking lot, and the only way to get through is by squeezing between two cars, and if I inevitably scratch the parked car, I am exempt from any damages. I don’t have to tell them anything because it’s meshaber v’nichnas meshaber v’yotzei. On the other hand, I don’t know if the right to park in the parking lot has the same privilege as getting access to the public domain. It’s specifically when the reshus horabim (the public domain) is blocked off or you trap someone that this rule is applicable.

Then that’s when there’s ein breirah (no choice). But here there was a breirah (choice).

Here there’s a breirah, to park outside in the street. It often happens that a parking lot is full. And if this fellow hadn’t used up the extra parking space, someone else would have definitely taken it. The only reason the space is here is because he was parked like that. So the owner of the parked car did not bring it on himself. She surely wouldn’t have gotten the space, because if the space had been there, someone else would have taken it, because the parking lot was full. It’s absolutely out of the question to try to squeeze in, if you think that there’s a probability that you’ll damage the parked car.

But there could have been two parking spaces, and he parked right in the middle, so that only one car is taking the place of two cars.

The rest of the parking lot is all full – right? There is a heavy demand right now. So if he would have moved over and parked within the confines of one space, so somebody else would have already taken the second space. So the parked car never denied you a space. Only now it appears that a space has been denied, but in fact someone else surely would have gotten it, because it’s hard to imagine that a lot where 700 cars have parked wouldn’t have had 701 cars parked. It’s full, so that means that last space would have been filled. You can’t look at the person who parked the car there as your enemy who denied you a space. Therefore you have to go park in the street, and you should not do anything to risk damaging their car.

So the answer is, you should leave a note?

NEXT WEEK’S QUESTION 33: USING A STRANGER’S CUP FOR YADAYIM

At my company’s pantry, I wanted to wash for bread, but didn’t have a cup. There was a coffee mug there, but I had no idea who it belonged to. Can I use it to wash for bread? Even though I will dry out the cup after using it, isn’t there a possibility that the owner of the cup could come by while I’m using it, and ask why I’m using his cup? Is that a potential chillul Hashem (desecration of G-d’s name)?

NEXT WEEK’S QUESTION 34: CALLING AFTER A FENDER BENDER

My car hit the rear fender of another car. I asked the other person to settle this between us, without the insurance companies, and I gave him my phone number. He got an estimate of $400, and I got an estimate of $200. He said he would think about it. Three weeks have elapsed since I heard from him. It’s remotely possible that he lost my phone number. Should I call him?

« Parking for a Minute by a Bank
Stranger’s Cup »