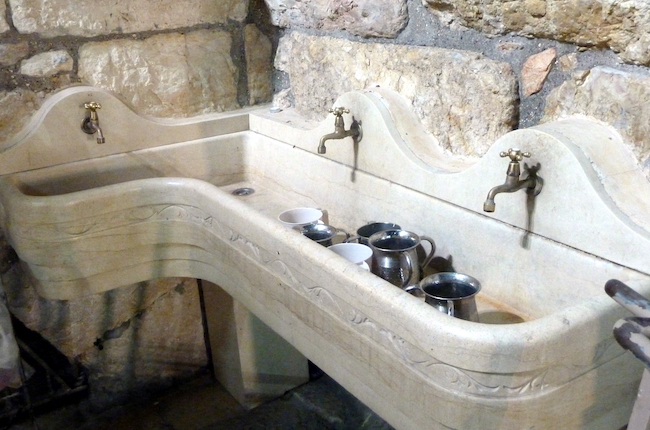 At my company’s pantry, I wanted to wash for bread, but didn’t have a cup. There was a coffee mug there, but I had no idea who it belonged to. Can I use it to wash for bread? Even though I will dry out the cup after using it, isn’t there a possibility that the owner of the cup could come by while I’m using it, and ask why I’m using his cup? Is that a potential chillul Hashem (desecration of G-d’s name)?

It’s remarkable that you ask that, because I was at a company a couple of weeks ago, and I wanted to wash for bread. I asked if they had a cup. They took me into the pantry and there were a lot of cups. They said, “Take one, nobody minds.” I said, “You’re sure nobody minds?” So they said, “Yes. Nobody minds when people use each other’s cups…” I was standing there, just sort of not doing anything, so the person said, “Here, I’ll give you my cup.” There are some people who might be concerned about others using their cup. These cups are ceramic, and if they drop they chip. But generally speaking, I would say that there’s very little chance of chilul Hashem, very little chance of the owner of the cup being concerned.

The gemorah says that it’s not prohibited to use things which people are mevater on (unconcerned about), things that their owner tends to not care whether or not someone else is using it. But you should try to look for a way around it anyway. I felt very uncomfortable using any of the cups of the other people.

So you should try to find an alternative, but – let’s say – you don’t find one, so then certainly you can use the heter (the dispensation), to use it.

QUESTION 34: CALLING AFTER A FENDER BENDER

My car hit the rear fender of another car. I asked the other person to settle this between us, without the insurance companies, and I gave him my phone number. He got an estimate of $400, and I got an estimate of $200. He said he would think about it. Three weeks have elapsed since I heard from him. It’s remotely possible that he lost my phone number. Should I call him?

He may have lost your number, and you owe him money. Send him the $200. That was a legitimate estimate. Of course you should call him, why not? If you damage somebody, you’re obligated to pay.

NEXT QUESTION 35: LETTING SOMEONE ELSE USE SOFTWARE I’M EVALUATING

A company that normally charges for its software sent me a free copy for me to evaluate, since part of my job is to recommend software to my firm. There is a person in my company who I work with on a variety of tasks, but he’s not part of my group and his official responsibility does not include evaluating software. He would like to install the software that I was given and try it out. His opinion could be useful to me in my evaluation. Can I let him install and use the software on his machine? Does it matter if he also uses the software at home?