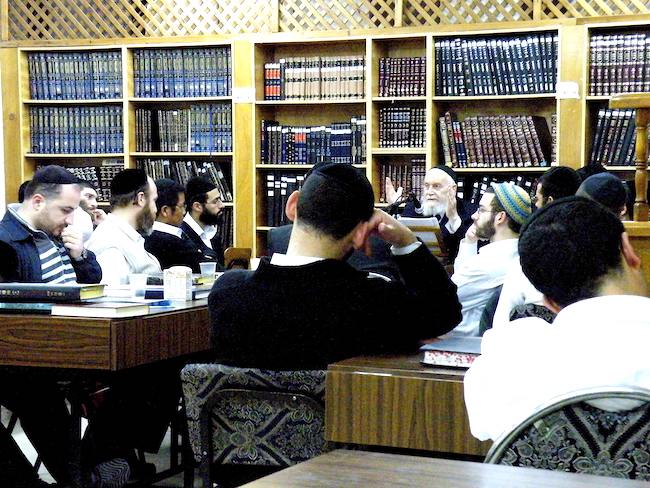 Attending a Large Shiur Without Permission

QUESTION 36: ATTENDING A LARGE SHIUR AGAINST THE WISHES OF THE ROSH YESHIVA

A person is in a shiur (class) at a Yeshiva where the Rosh Yeshiva (head Rabbi of the Yeshiva) makes it clear that he doesn’t want anyone to attend for more than two years. There are about 400 students in the shiur. Can a person stay a third year by sitting all the way in the back, hidden from view, so that the Rosh Yeshiva doesn’t notice?

Torah is distinct from other things. There is no ownership of Torah, and the Shach (a well-known authority on Jewish law) writes that it is not gezel (theft) to steal Torah.

Because of that, it would seem that a person would be allowed to sneak in and listen to the Torah even if the Rosh Yeshiva discouraged it. In fact, evidence for this can be drawn from Hillel the Elder. The Talmud says that he lay on the window and listened to the words of Torah in the yeshiva, although he didn’t pay for it.

On the other hand, it’s possible that he’s taking from others, because perhaps there’s no room, and the current students may suffer because the older students have remained there. That’s probably why the rosh yeshiva wants that no one to be there for more than two years. So if the person attending the shiur is hurting others, and hindering them from listening, that’s already a more difficult issue.

Another way of presenting the question is whether a person has a right to sit in the place where the shiur is being given. The Rosh Yeshiva may have ba’alus (ownership), of the place, and he can decide whom he wants to use it. In that case, if the person were prohibited, that person would only be able to listen from outside. But if the lecture is being given in a public place, where you could walk in, the Rosh Yeshiva can’t prohibit him from listening to his Torah — as long as it doesn’t deprive others of listening.

So if there’s room in the back – there are extra seats – then he probably would not be depriving anyone else. So you think it would probably be all right?

NEXT WEEK’S QUESTION 37: RESERVING DOMAIN NAMES ON THE INTERNET

On the Internet, a person can reserve an Internet name by going to a web site and entering information about the ‘domain name’ that a person wants to have. The company then sends a bill via e-mail, which can be paid by credit card or check. If the money isn’t paid within a certain time, the name is lost. I assume that a person who wants to be on a high level always does what he says, and if he says he’s going to buy something, follows through. If after a week a person decides he really doesn’t want the name, is it perfectly all right, even if he likes to operate lifnim meshuras hadin (beyond the letter of the law), not to pay and let the name lapse, even though in a sense he has electronically committed himself to purchasing that name?

« Letting Someone Else Use Software
Reserving Domain Names on the Internet »