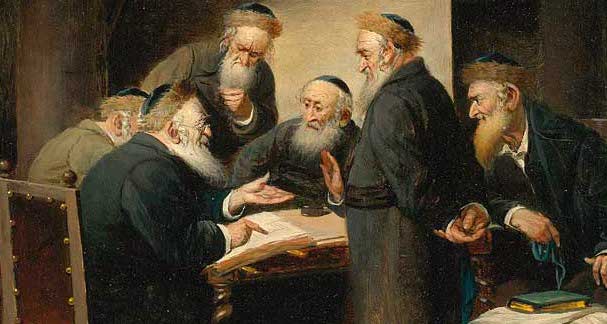 There are three [types of] deniers of the Torah.

(1) One who says the Torah is not from G-d. Even if he claims Moses composed a single verse or single word [of the Torah] on his own, he is [considered] a denier of the Torah.

(2) So too one who denies [the Torah’s] explanation, namely the Oral Torah, or he rejects its bearers (lit., ‘its tellers’) as [did] Tzaddok and Bysos.

(3) One who says the Creator exchanged one commandment with another one, and that this Torah has already become annulled — even though it was from G-d, such as [believe] the Christians and the ‘Hagarites’ (i.e., Muslims).

Any one of these three [is considered] a denier of the Torah.

As a general introduction. for much of this chapter the Rambam enumerates the very few exceptions to the principle that all Jews are granted a share in the World to Come.

Last week we began discussing the concept of the Torah’s “bearers”. Not only are we taught that one must not reject the Torah of Moses — as the entire nation witnessed G-d communicating with Moses at Sinai, but neither may we reject the Torah’s bearers. Who are the Torah’s bearers? Does the Torah “belong” to some Jews more than others and we must submit to their authority? Isn’t the Torah the possession of all Israel? And further, even if some rabbis are somehow more entitled to rule on the Torah’s meaning, how can I be dubbed a heretic for disagreeing with them? I’ve merely rejected the perfectly fallible understanding of other human beings. Maybe they are wrong in this case? How is arguing with them tantamount to rejecting the Torah itself?

Deuteronomy 17 (vv. 8-13) discusses the institution of the high court of Israel (known as the Sanhedrin). When people would have disputes they were instructed to go to “the place the L-rd your G-d will choose” (later determined to be Mount Moriah in Jerusalem, where the Temples once stood). They were to go to “the Priests, the Levites, and to the judge who will be in those days” and would receive a decision. They would be obligated to abide by that decision, not veering from their words “right or left.” And lastly, one who willfully rejects their words (and who additionally instructs others to follow his own opinion instead (Talmud Sanhedrin 86b)), would be put to death.

We are thus taught of the institution known as the Sanhedrin. It consisted of the 71 greatest scholars of Israel. (The Children of Israel had a much wider judicial system, with lesser courts in practically every town as well as lesser ones in Jerusalem itself, based on Deut. 16:18-20. The Sanhedrin — the Supreme Court — was reserved for the most difficult matters of Jewish law.) To serve on most courts, a judge had to be certified with semicha (lit., resting or supporting, as Moses laid his hands on Joshua at the time of his appointment (Numbers 27:23)). Semicha could only be bestowed by a rabbi with semicha himself; thus, historically judges were ordained only by authorized judges, going back in an unbroken chain since Moses.

(Today, the practice of ordaining rabbis is universally referred to as giving “semicha”, although today it is only a commemoration of the true semicha. (The actual semicha ceased somewhere in the period of the Talmud — it is not known precisely when.) Also, in the Talmud’s time — as well as today — different types of semicha existed depending upon the type of cases a student was authorized to rule on. Finally, there are certain types of judicial cases which can be presided over even by knowledgeable laymen.)

We can thus begin to answer our question. The “bearers” of the Torah are the judges authorized to decide matters of Jewish law. Their authorization stems from the semicha they received — ultimately from Moses, qualifying them to preside over cases of Jewish law.

What remains to be explained is why do their interpretations assume the status of Torah law. I may be a heretic for denying the words of the Torah itself, but let’s say I simply question the wisdom of the high court’s decision? As unlikely as it may be, perhaps they are wrong? They made a mistake! They’re only human! Yet the Torah here (v. 12) states that one who argues with the words of the Sanhedrin is put to death. And so too the Rambam dubs such a person as a heretic — as one who has rejected the Torah of Moses.

In fact the Midrash here (Sifri to v. 11) goes even further. On the verse, “You shall not veer from the matter which they tell you right or left,” the midrash adds (based on the expression “right or left”), Even if what appears to you as your right they tell you is your left, and what appears as your left they say is your right, you must listen to them. Thus, the Sanhedrin must be obeyed even if their words clearly seem wrong to you. It apparently makes no difference whether your own opinion is theoretically right or wrong. The Sanhedrin’s words are binding and final. The Torah follows its decisions; we must blindly obey.

There are two reasons for this. The first is practical. The Torah requires a central authority — a Supreme Court — to determine Jewish law. Its decisions must be final and universally binding. No working legal system can function without such a provision. Otherwise, to use the Talmud’s expression, “Everyone would go and build his own altar” (Hagigah 22a) (i.e., would serve G-d as he sees fit). Israel, always a strong-willed and contentious people, would instantly splinter and Judaism would lose all semblance of cohesiveness.

I occasionally receive emails from people complaining that the rabbis have long ago usurped the Torah and contorted it to suit their own agenda (to consolidate their own power, make women second class citizens, etc. — whatever ax the particular fellow has to grind). And we must go back to what G-d really meant (which somehow these folks are the only ones to truly know).

Well, apart from the patent absurdity of such claims — that we in the 21st century understand the Torah better than scholars of thousands of years ago who possessed an unbroken tradition since Sinai — the Torah simply does not allow for such free-for-all reinterpretation. As any body of law, it created a mechanism for resolving disputes and reaching final and incontestable decisions.

The idea, however, is far deeper than this. This principle is no mere practical provision. The decisions of the high court actually assume the status of Torah law. There’s a famous debate in the Talmud (Bava Metziah 59) in which all the scholars present agreed on a certain law save one — in fact the greatest one, R. Eliezer. After they refused to accept his position, R. Eliezer demanded: “If the law is like me, let this carob tree bear witness.” The tree uprooted itself and moved a distance. The Rabbis were not swayed, saying that one cannot prove anything from a carob tree. He continued, “If the law is like me let this aqueduct prove it.” The water reversed its course. The Rabbis were still not swayed.

At the end of the story, R. Eliezer finally cried out, “If the law is like me, let the Heavens bear witness.” A voice then emanated from Heaven, stating: “What do you have with R. Eliezer? The law is like him everywhere!” R. Yehoshua stood up and proclaimed: “It [the Torah] is not in the Heavens” (Deuteronomy 30:12). The Talmud explains: The Torah was already given to man at Sinai. It is no longer G-d’s to decide. Rather, we adhere to the general principle of following the majority opinion (Exodus 23:2).

The concept behind this is a profound one. G-d gave us the Torah. It is ours to understand to the best of our ability, applying to it the Torah’s own principle of following the majority opinion. Ever since Sinai, the Torah is no longer the possession of G-d but has been placed in the hands of man.

Why did G-d entrust us with so precious a possession, presumably even if at times we err in its interpretation? The answer is because the Torah is such that human wisdom must be applied to it to interpret and understand it. The Torah itself is abstract. It is G-d’s perfect, infinite wisdom. In a way, it belongs more to the highest spheres of heaven than to the earthy, mundane world of man. (See Talmud Shabbos 88b that the angels refused to part with the Torah and allow Moses to take it: “What is man that You should remember him?” (Psalms 8:5).) Understanding the Torah and applying it to finite man and to real-life situations requires human understanding. We would have to take the Torah’s principles, integrate them, and continually apply them to new people and new circumstances. Man — the greatest among us — would form the bridge spanning the gap from the heavenly plane of absolute truth to the murky and relativistic world of man, applying G-d’s infinite truths to relative, human situations. G-d thus had to entrust the Torah to human beings, to the greatest scholars of the generation, who would be authorized and entrusted to understand the Torah as best they can and bring it down to the world of man.

(One of the more fascinating aspects of the story we quoted above is that the Rabbis refused to accept R. Eliezer’s opinion even though G-d Himself cried out that he was right. Now understanding to the best of our ability is one thing, but how could the Rabbis argue knowing that they were actually wrong? There are different approaches to this. For a lengthier discussion in which we discuss one, please see the following class: 6:6).