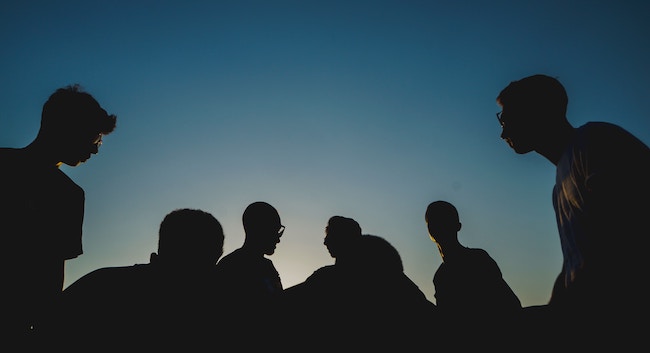 Last week we discussed the contrast between this mishna and the previous, in which R. Yochanan asked his students to find a “good way” to which one should cleave. We also discussed the spiritual dangers of one who borrows recklessly, without concern for how he will repay his debts, and how he is just as likely to “borrow” his years of life and blessings from G-d, never to fully repay them.

This week I’d like to take up one final issue before we move on (an issue as relevant to the previous mishna as the current): the difference between the answers of R. Yehoshua and R. Yossi — the good (or bad) friend versus the good neighbor.

In the eyes of the Sages, a true friend is not merely a person we socialize with. We enjoy light and meaningless social interactions with a host of people whose names we’ll probably forget two months later (if we bothered to learn them at all). Such people are not true friends. True friends are those who have a meaningful and lasting relationship. They confide in one another and share each other’s problems, dreams and aspirations. They discuss life and values, exchange feelings and opinions, and grow together as individuals — in ways a single person could never do.

Further, true friends openly criticize one another. A person (or spouse) who always agrees with me or sees things my way is hardly a helpmate or friend. (A common phenomenon in unhealthy husband-wife or employer-employee relationships is that the underling is basically terrified of the consequences of his or her defiance, and so goes through the motions of a relationship in “people-pleaser” mode.) In the words of King Solomon: “Faithful are the chastisements of a friend, while burdensome are the kisses of an enemy” (Proverbs 27:6). A friend is one who sees my faults — quite likely better than I see them myself — and since he’s a true friend who truly cares, takes the time and effort to set me straight.

We learned earlier that one should “acquire for himself a friend” (1:6). True friends are not easy to come by. They must be “acquired”. We pay for friendship — through an investment of time, effort and emotions. And we grow immensely from it — both in giving of ourselves to others and in the amount of spiritual growth we receive from them.

With this in mind, R. Yehoshua advises us that one who wants to succeed in life must acquire for himself a good friend (and be one as well). With the support of proper friendships, we are capable of seeing far more in ourselves, delving far more deeply into our souls, and defining and becoming aware of our inner selves. A rabbi or teacher can lecture to you for hours on end, but only when you and a friend together discover what life is all about will you truly discover G-d.

Conversely, states R. Yehoshua, nothing can be more detrimental than a bad friend. The meaning is not of course a distant or unfriendly one, but one who is unworthy and exerts a negative influence on you. Friends touch each other in the most intimate manner possible with their soul-bond and heart-to-heart discussions. Be touched by one who teaches you to live for yourself and ignore the beckoning of your soul — or one who sees friendship as a means of sharing gossip and bitterness — or one who betrays your trust and friendship, repaying you instead with manipulation and verbal abuse — and you will be hurt as deeply and intensely as the good friend can build you up.

We now turn to R. Yossi’s good neighbor. It is difficult at first to understand why R. Yossi prefers the good neighbor over the good friend. A friend is a true soul mate, one who influences us on the profoundest level. A positive relationship with a neighbor too can be beneficial, but it is typically far less intense than the type we have with a friend. Don’t most of the interactions we have with our neighbors amount to little more than pleasantries and cordialities, hardly the stuff of a true soul-bond? (And of course if we truly become close to our neighbors, they would just be another example of R. Yehoshua’s good friend.) If so, doesn’t the good neighbor at best provide the same benefit as the good friend, just far less intensely? And so, what advantage did R. Yossi see in it?

The answer is that while our relationship with our neighbors is not nearly as intense as it is with friends, in a way they have a far more profound influence upon us. When a friend confronts his friend with constructive criticism, it is an intense encounter which tests the mettle of both the people involved and their friendship. It is not easy to admit one’s shortcomings. When that true friend looks you in the eye and levels with you, only the strongest of person will grow from the experience. Only if I truly believe in my friend and his sincerity will I be able to rise above the annoyance and defensiveness which naturally result from receiving criticism, and will I grow in the manner only possible through true friendship.

Neighbors, however, exert an entirely different and far more subtle type of influence. It is not one of active confrontation but of setting standards. Neighbors set a tone in a community and standards of behavior. And it is very difficult for the individual to deviate from those standards.

Let’s take a simple example. Say you are not personally Sabbath observant, but for whatever reason you find yourself attending an Orthodox synagogue on the Sabbath. So here you come, driving up to synagogue and getting out of your car while all your fellow congregants are walking. Now the others are well-mannered. They politely turn away and do not stare (their kids will). How would you feel? Like going through the floor? Even if you are perfectly comfortable with your own religious convictions, sticking out in a crowd is mortifying. You would find yourself parking in some dark alley eight blocks away and walking enormous distances in order to keep your differences a well-kept secret.

Of course this works both ways. I was on travel a few years ago and found myself having to don tallis and tefillin (prayer shawl and phylacteries) for morning prayers at a crowded airport in Italy. There were very few Jews around and it was not a particularly secluded spot in the busy airport terminal. And so, I only did so with the greatest of unease. (I later found out that two other religious Jews were meanwhile praying in the upper floor of the same terminal.) Now most (but not all) of the onlookers were polite enough not to stare, and many I’m sure were genuinely interested and respectful of a person who is committed to his religious beliefs — a quality sorely lacking today. And finally, who really cares if complete strangers consider me “weird”? I doubt I’ll ever see any of them again. Yet people just do not like to stick out in a crowd. This is simply human nature.

This is the pressure known in English as the public eye — and the type exerted by R. Yossi’s “good neighbor.” Good friends are crucial for one’s development, but not all of us are emotionally prepared for the intensity of a close friend telling us not to drive on the Sabbath. Yet neighbors can exert that very same influence without uttering a word. The type of neighbors you choose will set the tone and standards of behavior within the community for better or for worse. And one who veers from the accepted norms will have to bear the palpable sense of one of the most painful and humiliating human experiences: being different.

Is Torah observance imposed through good neighbors and peer pressure valuable? Yes and no. As powerful an influence it exerts upon us, it’s what we’d call a mile wide but an inch deep. As soon as a person is out of the sight of his neighbors, he will no longer sense those same inhibitions.

(This unfortunately occurred in recent Jewish history. When our grandparents moved from Eastern Europe to the Lower East Side (New York) a century ago — together with two million other Jews — the European “shtetl life” was quickly recreated (not to idealize that particularly either). When, however, those same Jews met some financial success and moved out of the dumbbell tenements to American Suburbia, the infrastructure of Jewish community was forever lost, and with it practically all of religious observance.)

Good neighbors are a powerful influence, but they are an external one alone. They in no way take the place of R. Elazar’s good heart. Hillel taught us earlier, “If I am not for me who is for me?” (1:14). However, as with all good forces in this world, we would do well not to ignore it. Stay within the confines of a good neighborhood and a good community. Allow peer pressure to influence yourself and your children for the better rather than the worse. For through our associations at all levels we both learn from our good neighbors and become ones as well.