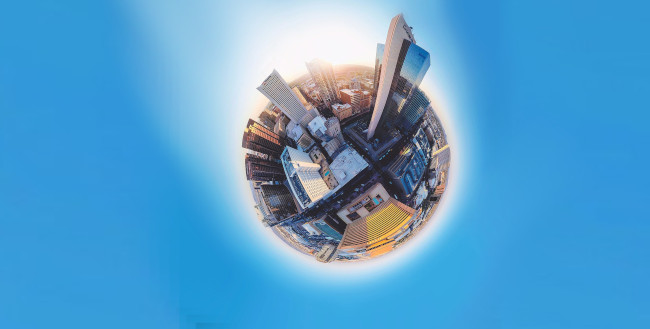 Chapter 4, Mishna 12: It’s A Small World After All

“Rabbi Meir (mai-eer) said, lessen your business activities and engage in Torah study. Be humble of spirit before every person. If you have wasted time from Torah study, you will be given many causes to neglect it. And if you have exerted yourself in Torah study, G-d has much reward to give you.”

For the most part, this week’s mishna seems to revolve around one basic theme — that Torah and religion should play the most important part of our lives over livelihood and career. R. Meir first advises that we lessen our business activities and study more Torah. As many of us know, work never really finishes — even after that deadline has passed. There are always loose ends to tie up, e-mails to respond to, work to take home from the office, and new ventures to undertake, thereby (we suppose) earning us more money. And of course, thanks to cell phones and wireless technology, the aggravation never ends. (It’s been noted that many adults typically spends more of their waking hours with coworkers than with spouse and children. Perhaps unavoidable, but hardly beneficial to family cohesiveness. Hopefully, the family time will be superior in quality if not in quantity.)

To this our mishna states that there must be a limit. For most of us work is a necessary mainstay of our lives, in fact a fulfillment of a Torah obligation to support ourselves monetarily. But it is at best an indirect form of Divine service. It must never take precedence over true spiritual growth.

Moving ahead to our mishna’s third point, R. Meir continues that if one allows himself to be distracted from Torah study in the unending pursuit of wealth, G-d will send all sorts of other distractions his way. As we discussed last week, life has no shortage of annoyances and interruptions. If a person allows himself to be distracted with all sorts of “unavoidable” obligations and commitments, G-d will see his wishes fulfilled and will send more than enough to keep him occupied — and very frustrated.

Our mishna’s final point is that one who studies Torah will receive much reward. As R. Samson Raphael Hirsch explains, if one does limit his financial activities and pursues Torah study, he does not need fear the loss of revenue. G-d has ample reward with which to compensate him — both in this world and in the next.

Our mishna’s second point, however, seems out of place: “Be humble of spirit before every person.” What brings this up? It’s certainly good advice, and as Rabbeinu Yonah points out, one who studies more must be all the more careful not to lord over those less learned. But is this especially important or appropriate for someone who is working fewer hours and studying more Torah?

We may suggest that the message is as follows. Our mishna is not talking about one who is studying Torah in his spare time, but about one who is studying at the expense of worldly involvement. Such a person is not allowing the pursuit of wealth to interfere with his spiritual goals. And for the most part, this is commendable. Torah has become his sole interest, so much so that his other needs, to whatever degree possible, are disregarded.

But there is a danger in this as well. The less we have to do with others – – whether professionally or otherwise — the less we build a sense of kinship and oneness with them. Living separate, isolated lives tends to breed a sense of aloofness. Dealing with others, even in very dry, businesslike settings — buying, selling, bartering — forces us to build working relationships — of necessity and of trust — with others who are probably religiously very different from ourselves. And this is good. It breaks down a lot of barriers of strangeness and misunderstanding which so interfere with the unity of the Jewish People and of mankind. I’ve seen many instances of “ultra-Orthodox” yeshiva people having professional dealings with Gentiles and irreligious Jews. All of a sudden, they have a lot in common — and they can communicate quite openly and comfortably. Stereotypes, biases, preconceived notions quickly melt away when each party sees that the other group consists of real people who are — for lack of better term — “normal”. Typically, both parties are greatly enriched by such interactions. It’s a small world after all.

(I can’t resist sharing a personal memory. I was all of eight years old when my family went to Disney World in Florida (1973). I still vividly remember the ride / presentation “It’s a small world after all” and even at that tender age, I was absolutely moved. I saw these little characters — American, Chinese, African etc. — all come out of their respective dwellings, joining in song “it’s a world of laughter, a world of tears; it’s a world of hopes and a world of fears…” (I probably have the wording a bit off — it’s been a good few years.) 😉 I was just taken by the truth of it. And the more of the world I have since seen, the truer that refrain rings in my ears. Sad that we don’t always carry into adulthood some of the axioms which are so self-evident to the unbiased child’s mind. Sigh… Back to the present…)

This is the danger which is inherent to one who avoids worldly pursuits in his quest for Torah. Of course, R. Meir never intended to imply that we cut ourselves off entirely from the rest of the world. Yet the more we live apart, and the less we have to do with the outside world, the greater the risk that we will look at strangers not as friends and associates, but as unlearned simpletons, not worthy of our attention. Thus, R. Meir felt it necessary to add that we become exceedingly humble before others — not only before G-d, but before others as well. All of G-d’s creations are important. None of us are perfect, yet neither are we thoroughly unworthy or insignificant in G-d’s master plan. If a scholar does not see this reality through direct interaction with others, he must constantly and humbly remind himself of the nobility of all humankind.

This lesson is brought home eloquently by an incident in the Talmud (Shabbos 33b). The great kabbalist, R. Shimon bar Yochai, was forced to flee from the Romans. He and his son, R. Elazar, fled to a cave, where they were miraculously sustained by a carob tree and stream of water. There they studied the deepest secrets of kabbalah (which, I suppose, is done best in a cave). After 12 years, Elijah the Prophet came to tell them it was safe to depart. Upon exiting they saw people plowing and planting their fields. They were horrified at the earthiness of the scene: “You are abandoning eternal life for temporal life?!” Everything they looked at ignited due to the holiness and incisiveness of their gaze. A Heavenly voice sounded: “Did you come out to destroy My world?”, and they returned to the cave for another twelve months.

At the end of a year they went out again. This time, R. Shimon was already at peace. His son, a bit more hot-headed (literally), was not. Whatever the son looked at ignited. The father then looked and extinguished the flames. They then saw an older man pass by, carrying two bundles of myrtle. They asked him what they were for. He answered, in honor of the approaching Sabbath. They asked, “Isn’t one enough?” He answered, “One corresponds to ‘zachor’ (“Remember [the Sabbath day]” (Exodus 20:8)) and one corresponds to ‘shamor’ (“Observe [the Sabbath day]” (Deuteronomy 5:12)).” (From the first verse we learn the positive commandments of Sabbath observance, such as making “kiddush” Friday night, and from the second we learn the negative — primarily not doing forbidden labor.) R. Shimon turned to his son and said: “See how beloved mitzvos (commandments) are to Israel?” And they were appeased.

We may ask: What was so significant about the passerby’s act — taking two bundles of spice rather than one? Was there something so special about it to appease the wrath of such great and discriminating personalities, with their otherworldly notions and perceptions?

I believe the idea is as follows: The Talmud writes that G-d spoke both of the words the old man mentioned — “zachor” and “shamor” — in a single utterance (Shavuos 20b). (We sing this Friday nights in the first verse of “lecha dodi”.) Why did G-d bother performing such a miracle? (We imagine G-d can chew gum and walk at the same time. Clearly, there must have been some significance in combining these words.) The meaning is that on some level both the positive and negative aspects of the Sabbath are one and the same. To us they are complete opposites — one is positive and the other negative. But on some kabbalistic, metaphysical level they are the same. There is no doubt that R. Shimon and his son understood the deep significance of zachor and shamor being one. Yet they met a simple Jew, who, like the rest of us, lacked any comprehension how these two concepts can be united. And what did he do on account of it? He honored the Sabbath even more.

This is what assuaged the kabbalists. Yes, most other Jews were not as advanced and scholarly as they. Yet in their own way, to the extent they were able, they too served G-d admirably and nobly. It is with this realization that we can pursue our own spiritual heights yet recognize that every Jew, both great and simple, is precious in the eyes of G-d.