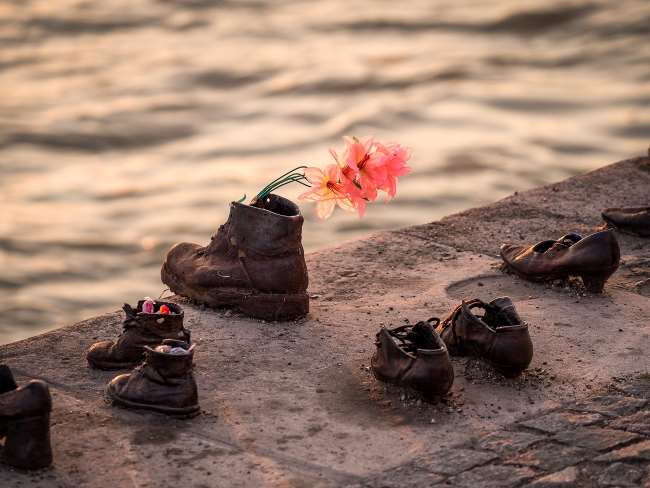 Yom HaShoah – How to remember the Holocaust

Shoah is the Hebrew word for “whirlwind.” It is the term used to described the conflagration that swept up six million Jewish souls between 1938 and 1945. A war was waged against the Jews in which unspeakable atrocities were perpetrated against a defenseless people. Men and women, young and old alike, were butchered at the hands of the accursed Nazis, may their name be eradicated for all time. Every year, on Yom HaShoah, we remember the martyrs who sanctified the name of G-d in the camps, the ghettos, and in the gas chambers.

A story is told of a unique Chanukah in Aushwitz. It was December, and a group of Jews in Aushwitz desired greatly to have a candle lit on the upcoming holiday. Obviously, there was no way the Germans would allow this to happen, and candles were impossible to come by in the camp. However, this did not deter these Jews. They saved small portions of fatty butter every day until they had enough to make a small candle. On the eve of Chanukah, they gathered in secret, a group of emaciated bodies who had given up their sole sustenance, around one rabbi. The rabbi then made the three blessings that one recites on the candles the first night of Chanukah. After the blessings were made and the candle was lit, one of the assembled approached the rabbi and asked “How could you make the third blessing? In the third blessing, we thank Hashem for bringing us to this day! How can we thank G-d for bringing us to this day while we are standing amidst horrors, death, and torture! Aren’t the dead better off than those alive?

The rabbi responded that he too questioned as to whether this blessing should be made. “However,” he said, ” when I looked around at the assembled crowd, I saw the glow on everyone’s face, and I perceived that faith was burning bright in their hearts. I, therefore had to bless Hashem, for allowing me tolive to see this assembly to martyrs who sancify the name of G-d in public, who keep their faith amidst the flames.”

As we mark the fiftieth anniversary of the liberation of the camps, we must ask ourselves: If we could ask the six million for a final request, what would it have been? Certainly, they would have expressed a desire for the continuity of the Jewish people. They, who died as Jews, would have wanted us to live as Jews, to continue to grasp the faith to which they held so tightly. The proper way, then, to memorialize the six million is to strengthen our commitment to Judaism, and intensify our study of Judaic learning. With this effort, may we merit to link ourselves to them in the bond of everlasting life.

However, we find that many Rabbis, survivers of the Holocaust, do not refer to it as the “Shoah”. Rather, they use the term “Churban Europa.” In fact, they commemorate the destruction not on Yom HaShoah, but rather on Tisha B’Av, the Ninth of Av. Why do they do this?

The truth is that the use of “Shoah” to describe the tragedy of Europe is a modern invention, quite similar to the word “Holocaust” in English. This could be taken to imply that the Holocaust was a singular event, a tragedy without equal. From one perspective, this could be a great error.

While Hitler may have been the last great anti-Semite to plot to destroy us, he was hardly the first. As we read each Purim, Haman actually came just as close to genocide, but through a series of miracles no mass murder took place. Over the intervening millenia, thousands and millions have perished during two conquests of Israel and the destruction of two Holy Temples, the Inquisition, the Crusades, the Chmielnicki Cossack Pogroms – a series of one destruction (Churban) after another that have befallen the Jewish people.

If we look at the Holocaust as a singular event, we may be lulled into the belief that anti-Semitism is a passing phenomenon, and only a small remembrance is required in order to ensure that no other man arises who tries to kill “from the youth to the old man, babies and women, in one day…” as we read in Megillas Esther.

Therefore it is important that we recognize that events over the last 2000 years, though much further from our recollection, are just as much a part of the tragic element of Jewish history. When the Second Temple was destroyed, only swords were available – those who wished to murder us did not have modern tools of mass destruction at their disposal – and yet they still killed hundreds of thousands. In addition, that destruction reduced us from a sovereign nation to a scattered and lonely people, setting the stage for the other tragedies that followed. We still await restoration of a rebuilt Jerusalem, the City of Peace, may it come speedily in our days. None of this reduces the mind-bending tragedy of 50 years ago – but nor should we be guilty of forgetting those other tragedies that came before.

In this regard, our observances of “Yom HaShoah” should be united with our observance of Tisha B’Av – the day upon which we recall _all_ of the great misfortunes that have befallen us. Just as there are poems recalling the destruction of two Temples, the massacres, Inquisitions and pogroms, so too must we incorporate readings on the destruction of Europe in this Century into our observance of that day (there is a particularly beautiful poem written for this purpose by Rabbi Shimon Schwab z”l, the recently-deceased leader of the relocated German Jewish community in Washington Heights. The Chassidic Rebbe of Bobov, and others, have also contributed to the tragic liturgy).

The story is told of Napoleon Bonaparte, travelling through the Jewish section of a city on Tisha B’Av. He rode by a synagogue, and as he did he heard people wailing and crying. He sent an officer to investigate, and he returned with word that the Jews were bemoaning the destruction of their Temple, some 1650 years before. When he heard this, Napoleon was astonished – and he said that any people that recalled the destruction of a Temple for so long, would certainly merit to see it rebuilt.

May the merits of six million martyrs rise before G-d, and may their merits – and those of the survivors – succeed in bringing an end to our long dispersion. May we see the building of the Third Temple, speedily in our days, Amen.