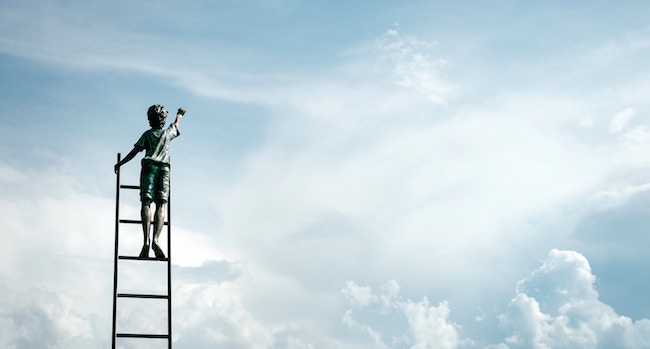 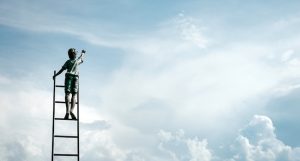 He dreamt. Behold, a ladder was set into the ground, and its top reached the heavens. Angels of G-d were ascending and descending upon it…Yaakov took a vow, saying, “If G-d will be with me…whatever You will give me, will certainly tithe it to You.”[2]

Two kinds of heresy are available to a person who completely accepts G-d’s existence. One kind understands G-d as aloof from the world, uncaring about its events, and unwilling to get involved in the trivial pursuits of Man. Another kind underestimates the importance of Man, not of G-d or His providence. It does not recognize any connection between a person’s actions and the supernal worlds. What Man does affects his own locale, but does not spill out over the entire cosmos.

Yishmael’s heresy was of the former type. His untamed, wild nature did not meant that he rejected G-d’s existence. He certainly was a believer. He rejected Hashem’s active roll in supervising Man’s actions. Man was free to do as he pleased.

Esav’s error was of a different kind. He, too, fully believed I Hashem. He rejected, however, any attempt to put Man at the center or the universe. Man should not delude himself into thinking that his puny actions leave a huge mark on a cosmic sphere of influence.

This is why Esav, according to Chazal,[3] found such a strange way to feign piety to his father, asking him how to tithe salt and straw. When we take a tenth and give it to a Levi or to the poor, we recognize the holiness that can inhere in earthly possessions. That holiness is itself a tributary of a different holiness – that of place. The kedushah of Eretz Yisrael is the spring from which possessions, objects draw their kedushah.

Esav rejected a fundamental connection between Man’s action and the Upper Worlds, which meant that he kept Man as an actor on a very small stage. He left no room in his conceptual framework for an elaborate system in which the small actions of Man impact the spiritual worlds – which then, in turn, send all sorts of spiritual benefits back to finite existence where they take concrete form. In that system, the Land of Israel has special potency in connecting the upper and lower worlds. There, the Shechinah can be felt most potently. This in turn drives the spiritually attuned Jew to increase his output of mitzvos – which in turn, energize the upper worlds. Esav, having no use for such a system, saw nothing special about the Land. If there was nothing special about a particular place (Eretz Yisrael) that made it serve as the source of the spiritual waters that flowed from it, then there was no mechanism to describe how some objects – to the exclusion of many others – became intrinsically transformed because of Man, and became sanctified. If the Land of Israel was not special, then there was no reason to treat some things differently just because they grew there. If G-d commanded Man to tithe his produce, He could not have meant, maintained Esav, to differentiate between grains and salt.

Yaakov’s beliefs were very different. The ladder that he saw in his vision, bustling with the traffic of ascending and descending angels, essentially portrayed the interconnection of Heaven and earth. (After going without sleep for fourteen years, he deliberately broke his habit on the way to the house of Lavan. He knew that he was blazing a trail for the future exile of his descendents, and he longed for some Divine instruction and guidance. If he had not yet achieved full prophecy, he still hoped for some Divine message through an inspired dream.) He therefore also grasped the specialness of Eretz Yisrael, and the kedushah of place. Moreover, he comprehended that the kedushah of things within Eretz Yisrael is a tributary of its place-kedushah. Therefore, part of his reaction to his dream was a pledge to tithe, to take maaser, [4] reacting to the holiness he now understood to be resident in everything within its borders.

The parshah begins with Yaakov’s leaving Beersheva, which, according to Chazal, left shattered the euphoria of the place he left behind.[5] We are puzzled by this. Yaakov was not the first tzadik to withdraw from a location. Why did the same not happen when Avraham and Soro left their home for Egypt?

The answer may be related to our discussion above. His former neighbors may genuinely miss the tzadik after he leaves. That alone does not explain the void he creates when he takes leave. The despondency that sets in stems from the parallel sense of loss that the tzadik feels himself when he thinks of leaving Eretz Yisrael! Because the lower and upper worlds are interrelated, his hurt and pain are transmitted to the Heavens. From there, the negativity is transmitted back to our world. In other words, the local folks felt the loss because Yaakov himself experienced pain in being wrested away from his beloved Eretz Yisrael.

This was not as true in regard to Avraham. It was specifically the dream about the angels’ ladder that communicated the full extent of Man’s effect upon the Heavens. Prior to Yaakov’s dream, no one grasped this concept in its entirety.

The loss, therefore, just did not register in the same way.