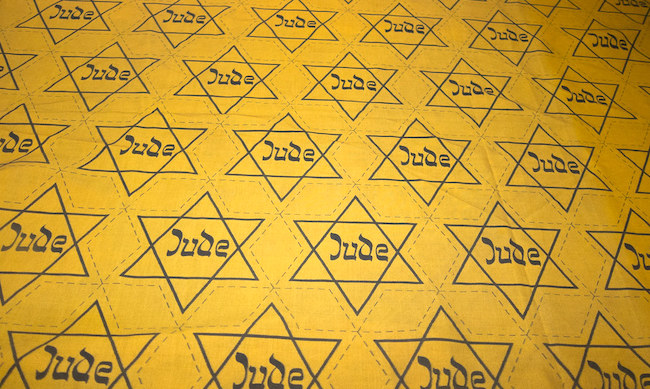 Origins of the Yellow Badge 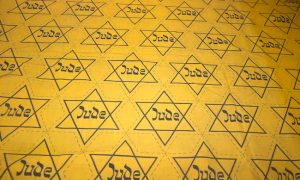 They replied, “An Egyptian man saved from the shepherds.”[2]

Chazal[3] are critical of Moshe for not protesting when he was described as an Egyptian. Because he failed to identify with the Land, he was not buried in Israel. He was denied entry to the Land even in death. Yosef, on the other hand, explicitly identified his origins in the Land.[4] Because of this, his remains were carried out of Egypt, and were brought to rest within the Land.

What, however, can this mean? Moshe could not have heard Tzipora and her sisters report to their father. How could he have protested?

Here is the explanation. Members of different nations can be distinguished from each other only through their beliefs or their speech or their garb. Now, when the Bnei Yisrael lived in Egypt, they were not in possession of a set of mitzvos and distinctive practices. Nothing distinguished them from their neighbors other than holding on to Jewish language and Jewish dress. When Tzipora first encountered Moshe, he was dressed in an Egyptian manner, and spoke the Egyptian language. This should be obvious; how else would she know to call him an Egyptian?

I know about this from personal experience. I once appeared before the ruler in Strasbourg. We were instructed to attach yellow badges to our clothes. A priest approached me, and said, “Jew, what is that yellow marking that you wear? What does it signify?”

I responded, “I do not know. What am I to do? The authorities demand it of us, and I am compelled to obey. If the law required me to walk about carrying a heavy burden, I would do that as well. As far as I am concerned, it is one of those senseless laws that you place upon us.”

“Well, if you don’t know, I will tell you,” said the priest. “The ruler’s demand of you is just, and derives from the Ruler of the universe. He commanded you, ‘I have separated you from the peoples to be Mine.’[5] Don’t think that your practice of the mitzvos accomplishes that separation. After all, you are not occupied with mitzvos all the time. Because of that, He gave you marks and signs to distinguish you as Jews. Your houses are marked as Jewish by the mezuzah. Bris milah serves that purpose upon your bodies, but that only works when you are naked. Tzitzis do the job on your clothing. Should anyone ask you what those strings are, you can respond, ‘So commanded the Master of all – and for good reason! They remind me of all His commandments.’ But for some time you have been embarrassed by that sign. Moreover, not only do they not differentiate you with pride from us, but you have been imitating our styles in dress. When you rejected His badge of honor, He decreed that you would instead have to wear a badge of shame and contempt, similar to that which we place on imbeciles so that people can stay away from them.”

I protested. BH, I was wearing my talis katan, and could point to our observance of the tzitzis requirement!

He would not accept this. “That won’t do it. You should be wearing them on top of your other clothing where they are visible, with pride.”

“No,” I replied. “Remember the words of David, ‘May they be cursed before Hashem, for they have driven me away this day from attaching myself to the heritage of Hashem, as if to say: Go worship the gods of others.’[6] David prophetically revealed that when we live under the authority of the other nations, we are unable to practice the Torah the way it ought to be observed.

“Now, you have it partially correct. The purpose of tzitzis is to remind us of who we are – specifically, of the 613 mitzvos that are alluded to between the number of strings and knots, and the gematria of ‘tzitzis.’ We are therefore concerned about the integrity of the tzitzis. Should we lose a single strand, the allusion would be incomplete, and our sign would become counterfeit. Falsifying the mark of the King is a capital crime; for this reason, we check our tzitzis throughout the day to ensure that they stay intact.

“You are the greatest threat to the integrity of our sign of allegiance to G-d. On a whim, you can maliciously decide to attack any one of us, and snip off part of a string, invalidating them as a sign. For this reason, we are compelled to wear our tzitzis under our top garments, so that at least they remain intact when we are safely inside a shul or beis medrash. Additionally, those who do not have to mix with you non-Jews wear their tzitzis proudly on the outside at all times.”

The priest was forced to accept this as true – and all who listened to our dialogue agreed as well.