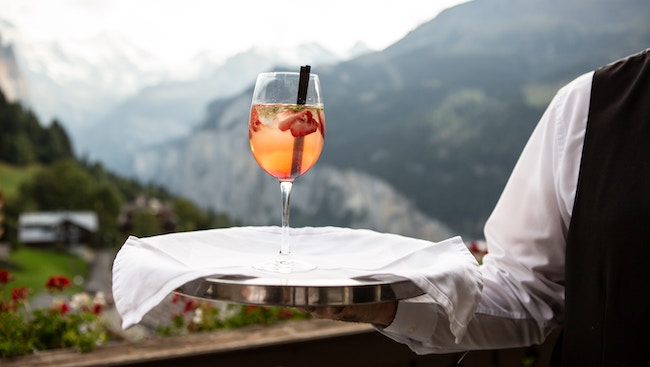 Servants Can Stay Away 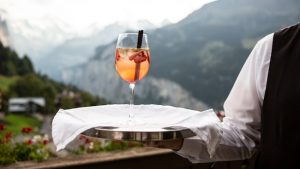 Rashi, citing the gemara,[3] notes that Avraham sent for the water – delegating the task to another – but took an active role in preparing the bread. In turn, HKBH followed suit in providing for Avraham’s descendants. The generation of the midbar drank water brought to them through the agency of Moshe’s actions at the rock; Hashem Himself[4] directly brought the mohn from the heavens to provide for their food needs. We have learned from this that, although many mitzvos can be accomplished through an agent, it is preferable for a person to perform them himself, rather than delegating them to others. And this is especially the case in regard to acts of chesed towards others.

It appears to me that this is the source for our minhag regarding the third seudah on Shabbos. Although many of his friends are on hand, our custom is that the chosson himself stands and serves the guests gathered for his sheva berachos! This practice arose, with the guidance of chachamim, in order to multiply the merit of the chosson at a crucial juncture of his life. Waiting on others – doing this himself, rather than through as agent –give him a boost in the area of chesed.

He dwelt in a cave, he with his two daughters[5]

We could speculate on how well-stocked the wine cellar of that cave was. It might be funny – but it would not solve the problem of how it just happened that Lot found plenty of liquid refreshment in the cave.

Rashi[6] writes that HKBH took care of provisioning the hide-out, in order to ensure the birth of the two nations of Ammon and Moav. The implication is that this was a kind of reward to Lot. This, however, makes no sense. Would G-d intervene miraculously to promote an episode of incest? Is it meritorious to him that he fathered children with his own daughters? If he possessed merit, Hashem should have provided him with a different wife, with whom he could have become the progenitor of two nations. Alternatively, He could have provided for the continuation of society by providing different husbands for Lot’s daughters!

What is at work here, I believe, is what Chazal call the “covenant Hashem made with our lips,”[7] i.e. the sheer power with which He endowed human speech. Words mean a good deal, and wield extraordinary power. They often take a life of their own, even when uttered without full intent.

Lot had earlier offered hospitality to the two angels disguised as ordinary visitors. By taking in the strangers, he had violated the protocols of the city. Angry citizens gathered in front of his house, demanding that he hand over his guests to the crowd – a mob intent on abusing them. To stave off the attack, Lot offered them his own daughters instead. His intentions were good. He wanted to protect his guests, and to prevent the crowd from committing mishkav zachar.[8]

Because he meant well, Lot merited becoming the father of Ammon and Moav, without anyone fully committing a grievous sin – his daughters, because they genuinely believed that they were saving humanity, and Lot because of his diminished capacity while drunk. Hashem set it up by providing the wine.

Avimelech summoned Avraham and said to him, “What have you done to us?…You have done to me deeds that ought not to be done!” And Avimelech said to Avraham, “What did you see that you did such a thing…”[9]

Know that whenever the Torah employs two instances of “he said” in a conversation (“…and said to him, ‘What have you done to us?’… And Avimelech said…”), we have a mandate to probe deeper and explain. Why would the Torah break up Avimelech’s complaints to Avraham this way?

Chazal tell us that it is futile to attempt to appease a person while he fumes in anger. That is Avimelech in the first part of his litany of complaints. Wisely, Avraham does not respond. Whatever he would tell Avimelech would not move him. He therefore waited until Avimelech’s anger subsided. When Avimelech began anew – “What did you see that you did such a thing?” – he was much calmer. It was more of a question at this moment than an accusation. Avraham does respond this time – and his response was apparently accepted!