Finding Ourselves – It’s The Rage 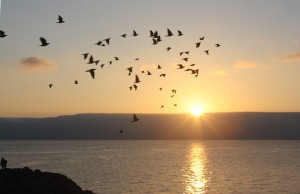 Why does Torah choose to trace the ancestry of Pinchas at this point? Rashi quotes a Midrash (see Tanchuma 1; Sanhedrin 82b):

Because the [men of] the tribes were humiliating him, saying, “Have you seen this son of Puti, whose mother’s-father fattened calves for idol- worship, and he comes along and kills a Jewish tribal prince?! Therefore Scripture comes and traces his ancestry to Aaron.”

They called Pinchas “ben Puti” in reference to the fact that he was a maternal grandson of Yisro (Jethro – Moshe’s father-in-law), who, before meeting Moshe, had been a priest in the service of idolatry. Yisro had seven names, one of which was Putiel – Puti for short. This, the tribes were quick to point out, was because he had fattened (pitem in Hebrew) animals to sacrifice to idolatry. By evoking this ancestral anomaly, they seemingly hoped to cast aspersions on Pinchas’ zealousy.

The question is, how? Regardless of Pinchas’ lineage, it is hard to deny that what he had done here could be seen as nothing short of praiseworthy. A “tribal prince” had had the audacity to perform the gravest of sins (idol worship and gilui arayos (adultery) – see above 25:6-8) publicly, in the holiest of places (inside the Mishkan/Tabernacle). Were his actions befitting of a prince? Did he not deserve to die? What difference did it make at this juncture whom Pinchas’ zeidys were?

Also, Rashi (Shemos/Exodus 6:25) quotes the Gemara (Bava Basra 109b) that Pinchas’ grandfather was called Putiel after two of his ancestors, Yisro who had fattened calves for avodah zara (idolatry), and Yosef, who had made a mockery (pitpet) of his yetzer hara (his “evil side”) by resisting the adulterous overtures of Potiphar’s wife (see Bereishis/Genesis 39:10- 15). So even by invoking this name, they were associating Pinchas not only with Yisro, who had at one time served idols, but also the holy zeide Yosef ha-tzaddik. Who’s to say which inference would in fact dominate, especially considering the undeniably meritorious nature of the deed?

Find someone you truly hate, it is said, and you will have found a little bit of yourself. Someone who by nature is inclined towards arrogance will be absolutely revolted by a peer’s vanity. (Have you ever seen the spectacle of two really arrogant people that have crossed paths? They inevitably attempt to outdo one another in demonstrating each other’s vanity, completely failing to see how arrogant they are being by doing so.) Even one who has overcome the baser aspects of his nature (or thinks so) will still become annoyed when seeing others who have not.

One who is naturally ungreedy and gladly makes do with a bare minimum has a hard time understanding the greed and selfishness of others, but it will not get him angry. If anything, he feels pity when observing how low man can stoop when driven by base desires he fails to truly comprehend. But a greedy man – or even a person who is naturally greedy, yet has battled with this greed and to some extent overcome it – might find himself incensed when he sees the greed of others. It awakens within the deepest feelings of (self?) loathing and contempt.

This psychological curiosity can, in my opinion, help understand the controversial phenomenon (particularly in Israel) of the irreligious Jew’s animosity towards his religious brethren, and conversely the lack of hatred/anger flowing in the opposite direction. (Perhaps this runs contrary to popular belief, but those who live among orthodox Jews know that this is the case.) Within the soul of every Jew, whether they admit it (to themselves) or not, a Jewish flame burns. When a Jew sees others who have done something with that flame, where they have not, it awakens within him the strongest of emotions. He feels, yet fails to admit, a deep connection to what he sees. He must either change, or condemn. Since changing is hard, sadly the latter choice is the one most often chosen. The observant Jew, conversely, has no burning desire (one hopes) to abandon his religion, and is not incensed by the irreverence of others, but if anything feels the desire to reach out.

A hasidic Jew once stood on a bus, dressed as usual in the traditional hasidic garb – long coat, fur hat, tzitzis, etc. Standing next to a secular Jew, he found himself the subject of an abusive tirade. “Where do you think you are – in Europe? This is America! You dress like the alte-Zeides! You probably can’t even speak the language properly. How big is your family? You probably take money from the government. And your wife? She’s probably at home slaving in sub-poverty! You refuse to expose your children to our beautiful North-American culture, imprisoning them instead both intellectually and physically – assuming you don’t abuse them as well… ”

Eventually, he tired of the abuse and turned towards his assailant. “I’m sorry, were you talking to me? You must have mistaken me for Jewish – I’m Amish.”

“Oh, I’m so sorry. I have the greatest respect for you people. Your traditions, your integrity, your family values – they’re fascinating!”

Whether this story ever took place or not – it could have. As long as it doesn’t awaken uncomfortable feelings, it’s easy to remain civil. Rage is only ignited by something with which we associate and feel a deep connection.

Perhaps this was the basis of the detractors’ criticism: Pinchas had undeniably done a daring and courageous deed, but what gave him the initiative to do so amidst the silence of so many others? “Take a look,” they said, “at his Zeidys.” On the one side, Yisro, who had served avodah zara. Evidently, they contended, Pinchas must have inherited some pent- up feelings towards idolatry. This is why he was so annoyed when he saw that others had given in to that desire – it was a mirror of himself. On the other side, he was a descendent of Yosef, who had indeed avoided sinning with Potiphar’s wife, yet according to Chazal (the Sages), had not done so with ease. Yosef was almost overcome with the desire to sin, and according to some (see Sotah 36b), had actually come that day to commit adultery, but recoiled at the last moment. Pinchas, they argued, must have inherited this latent yearning to sin, which is why he was so intensely enraged when seeing Zimri sinning with Kozbi. Yes he did the right thing, but what does all this anger and rage say about Pinchas’ personality?

Therefore, says Rashi, Scripture comes and traces his lineage back to Aaron. It’s as if to say the vengeful act of Pinchas was pure and altruistic in its intent. It was not the result of some dormant self- loathing, but was truly a kin’as Hashem – a vengeance borne purely from Pinchas’ inability to stand by and witness the desecration of Hashem’s name.

While we too should strive, like Pinchas, to act with the purest of intentions, the battle against human nature is an uphill one. If we at least recognize that when we are most aroused to anger, it may be a sign of some unaddressed issues within, we will have taken a firm step towards self-understanding and analysis, and tikkun ha-middos (character refinement).

Have a good Shabbos.

****** This week’s publication is sponsored by Mr. George Isaac, in memory of his mother, Pinia bas R’ Eliezer ob”m, whose Yortzeit is 27 Tamuz (5761). And in gratitude for the birth of a granddaughter, Esther Pinia, to his son-in-law and daughter, Shlomo and Haddasah Tziporah Moskovitz. ****** Text Copyright © 2004 by Rabbi Eliyahu Hoffmann and Torah.org