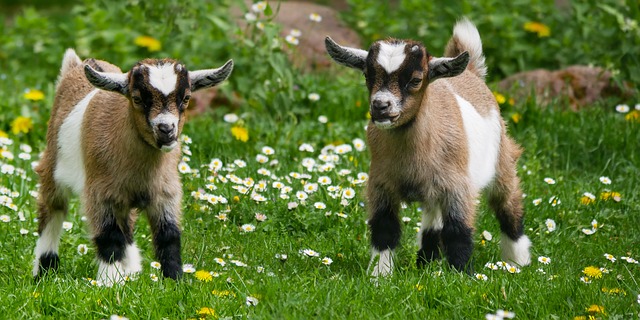 Lesson of the Goats 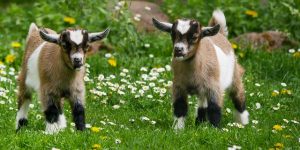 This week’s parsha, Acharei Mos, begins with a warning to Aharon HaKohen. Two of his sons had died upon entering the Kodash Kadashim, the Holy of Holies, in an unauthorized fashion. The warning is as follows: only enter the Kodesh Kodoshim on Yom Kippur, thereby avoiding the punishment meted out to your sons.

Our parsha then delves into a detailed description of the avodah, the service, performed on Yom Kippur. “Umay’ays adas Bnei Yisroel yikach shnei seiray izim l’chatas” (16:5). And from Bnei Yisroel you shall take two male goats as a sin offering. The Mishna in Yoma states that the two should be identical in terms of color, height and value and that they should be purchased simultaneously.

Rav Shimshon Raphael Hirsch expounds on this idea. Let’s imagine the thoughts of these two identical seirim (goats). They are brought to the Kohen Gadol and, as they stand shoulder to shoulder, lots are drawn. One is designated to be la’Hashem- brought as a korbon. The other, destined la’Azazel- to be thrown off a cliff..

At this point their paths diverge. As the seir la’azazel remains standing alive, the seir la’Hashem is slaughtered and the blood is collected in a vessel. That vessel is then brought to the holiest place in the world, the Kodesh Kadashim, where the blood is sprinkled between the poles of the Aron (the ark), on the paroches (the separating curtain between the Kodesh and the Kodesh Kodoshim) and on the Mizbeach HaZahav (the Golden Altar). The remainder of the seir is burnt outside of the machaneh.

The Kohen Gadol approaches the seir la’Azael, places his hands on its head and confesses the sins of the nation. It is then led out of the Beis HaMikdash toward the mountains outside of Yerushalayim…

“Ahhhh… boy, am I glad to be out of that place! Now I can relax and take a deep breath! Nothing like the country air! I’m glad they didn’t carry me out the way they carried out my buddy! Beautiful scenery! This is the life!”

It is then brought to the edge of a high cliff…

“What a panoramic view! Incredible, absolutely incredible! Talk about a Kodak moment!”

… turned around with it’s back to the cliff…

“Oh, I get it, you want a shot with the mountain in the background…tell me when… say cheese…”

… and pushed off the mountain!

On Yom Kippur we must learn the lesson of the seirim. We start out with certain similarities. We each then have paths to choose, decisions to make. Often one path seems wrought with sacrifice and pain- the other blissful and serene.

We’re often plagued with the questions: why give up pleasures? why restrain ourselves? why not get all that we can out of life? I remember an old Schaeffer beer poster which parodied a Nautilus advertisement. It was a picture of an extremely overweight fellow sitting on a Schaeffer beer barrel with a mug in each hand. The caption underneath read: No Pain, No Pain…

We each realize that it’s the struggles and sacrifices in life which reveal and build our strengths as individuals. The easy path is rarely the fulfilling one. That which seems so tempting and easy is often catastrophic. That won’t lead to the inner sanctum of the Kodesh, the holiness.

Yom Kippur is the day to see through this world of illusion, to recognize the underlying truths and to choose our paths wisely and insightfully. To learn the lesson of the seirim.

The parsha then teaches many varying laws. Amongst them are that all sacrifices must be brought to the Mishkan, not to consume blood and not to follow in the corrupt ways of the Mitzrim and the Canaanim.

What is meant by “laleches bahem”? The Kli Yakar explains that this pasuk is referring to the reward that one receives in this world from the mitzvos. This is the world of laleches, of movement. This world affords us the opportunity of growth and betterment. In the world to come the righteous sit with crowns on their heads. The angels are referred to as ‘standers’. They have no ability to improve. We are exhorted to use our opportunity to laleches bahem- to be constantly in motion, drawing ever closer to our Creator.

The Ohr HaChaim has a different approach. He quotes from the Zohar that the 248 positive commandments and the 365 negative commandments correspond to the different parts of the human body. Upon performing a mitzva that corresponding limb is encompassed with the kedusha of Hashem Himself. That person becomes the ‘merkava’, the vehicle of Hashem in this world. Hashem is Laleches bahem! He goes with us! We become a mobile Mishkan- the carriers of Hashem in this world.

In these weeks of sfira, girded with the lessons of Peasch, may we merit to choose the paths that will let us walk purposefully toward Shavuos. Accepting all of the mitzvos and becoming, like Har Sinai, enveloped in and the bearers of the holy presence of the Shechinah.