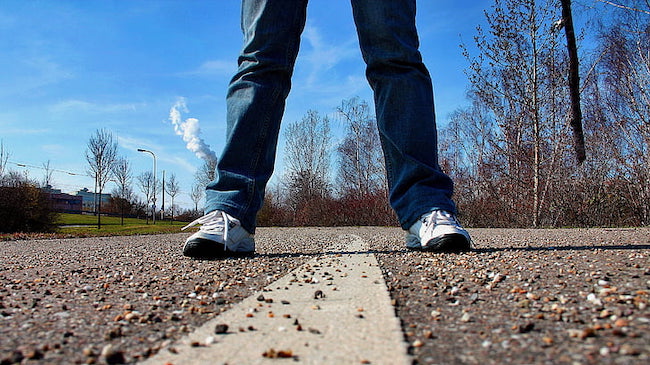 The Standers and the Walkers 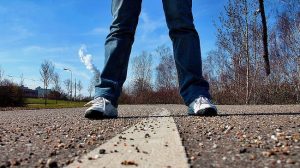 This week we read the parsha of Lech L’cha. Hashem command Avrom: “Lech l’cha {go} from your land, from your birthplace and from your father’s house to the land that I will show you.[12:1]”

Avrom, in order to realize his destiny as the father of Bnei Yisroel {the children of Israel}, was faced with the difficult challenge of leaving all that he was familiar with behind and begin a trek to the unknown.

The Zohar explains this passuk {verse} as alluding to a different type of journey. The soul, while in the World to Come, exists in close proximity to Hashem. However, due to the clarity that is revealed to it there, there is no free will and therefore no chance for spiritual growth and advancement. The soul in the World to Come, like the angels, is called an ‘omaid’, a standee.

While in this world, however, a person has free-will and can therefore advance in a spiritual sense. He is called a ‘holaich’, a walker.

“Lech l’cha!” Hashem has told the soul of every single person who has descended to this earth. Leave the comfort and tranquillity of the World to Come. Face the challenges that the confusion of ‘olam hazeh {this world}’ presents to you and vanquish them. “Lech l’cha”– Go and become a ‘holaich’, a walker.

The challenge is to enter this physical and materialistic world and yet maintain priorities consistent with the world from where our neshama {soul} was sent.

Avrom was promised wealth, leadership and fame for making this sojourn, yet as the passuk {verse} testifies: Avrom went because Hashem had commanded him to do so. That was his sole/soul motive–to follow the will of Hashem without becoming sullied by the distractions that this world surrounds us with.

Lot, Avrom’s nephew, also made this trip along with him. He sacrificed the comforts of his land, birthplace and father’s house in order to accompany Avrom even though he wasn’t specifically commanded by Hashem to do so. Yet, Lot’s sojourn ended in calamity.

How did the joint travel of these two individuals end in such opposite manners?

When two lines are drawn close to one another, it might appear at first that the two are perfectly parallel. However, if the lines are followed further and further, what appears at first as a slight, almost indiscernible space between them eventually evolves into a wide chasm between the two.

What slight difference could have been discerned early on between Avrom and Lot?

Rav Sholom Schwadron zt”l notes that by Avrom it says “Va’yait a’ha’lo {And he pitched his tent}.[12:8]” Rashi explains that it is read ‘his tent’ but written ‘her tent.’ He first pitched the tent of Sarai his wife and only then did he pitch his own. Although Avrom certainly had more than one tent, it’s written in the singular. By Lot, on the other hand, the passuk pointedly tells us that he had cattle, flock and tents [13:5].

Rav Sholom explains that to Avrom, all of the tents that he had were like one tent. They held no importance. To Lot however, they were an integral part of his portfolio. He would check ‘the market’ nightly to see whether had closed up or down. In the true sojourn of Lech L’cha he was losing the perspective and clarity of the place where his neshama {soul} had been sent from.

The Chofetz Chaim writes that a person is first tempted to sacrifice some aspects of his spirituality in order to gain materialistically. Once he has traded the eternal for the fleeting, he is tempted to sin with the materialistic itself, thereby rendering himself unworthy of maintaining that materialism.

Lot, he writes, epitomized that process.

The shepherds of Lot wouldn’t muzzle their animals. They maintained that the land had been given to Avrom. Lot was his heir. They allowed their animals to graze in other’s fields in order to drive home the point that it was their land. Avrom’s shepherds rebuked them–the land is not yet ours, you are stealing from fields that now still belong to others. The disagreement moved up and became a point of contention between Avrom and Lot themselves.

Avrom saw the need for them to part ways. He offered Lot his pick of direction and he’d go the other way. Lot saw the rich, fertile land that bordered the corrupt, immoral cities of S’dom and A’mora. He could have bowed to the opinion of Avrom and continued to stay with him, soaking in the glow of his spirituality. But, he became distracted from the purpose of his Lech L’cha (sojourn). He chose to sacrifice that spirituality for the materialism available close to the decadence of S’dom.

The ultimate end of Lot’s foray into S’dom is read in next week’s parsha. The angels, sent to destroy S’dom and Amora tell Lot: “Escape with your life.” Nothing else. That was all that he took with him. All of the wealth he had accumulated was overturned with S’dom.

Rabbi Abraham Twersky in ‘Let Us Make Man’ tells the story of a man who consulted a psychiatrist explaining that his family had insisted that he come. “What does your family think is wrong?” the psychiatrist asked.

“They think something is wrong because I like pancakes,” he explained.

“That’s absurd!” exclaimed the psychiatrist, “there’s nothing wrong with liking pancakes. I too like pancakes!”

The man’s eyes brightened with evident joy. “You do?” he said. “Then you must come to my house. I have trunks and trunks full of pancakes in my attic.”

When we analyze the obvious insanity of collecting crates of pancakes we realize that pancakes are a food whose purpose is to satisfy one’s hunger and appetite. They are a means to a specific end. Collecting them without regard to their utilization for their appropriate purpose is insanity. In other words, insanity is when something which is a means becomes an end in and of itself.

Expanding on this definition, Rabbi Twersky writes, money is a means to acquire goods or services to satisfy one’s needs. When one continues to amass wealth over and beyond one’s current and foreseeable needs it enters the realm of insanity…

But aren’t we all dragged in to this insanity to a certain degree?

The story is told of a king who was informed by his prime minister that a terrible disease had affected the kingdom’s entire crop. Anyone who would eat from the grain would go insane.

“But do not worry,” he told the king. “I have put away enough untainted crops to last us until next year’s crops are ready.”

The king refused. “I can’t eat anything different than my subjects. We will eat like everyone else. However, let us mark our foreheads with a symbol. When I look at you and you look at me, we will be reminded that we are insane.”

Where do we stand?

Let’s at least realize that our actions might be a bit insane.

This week’s Parsha-Insights is dedicated in honor of my nephew, Aaron Ciner’s (Aharon Tzvi ben Mordechai) Bar Mitzvah. May he continue to be a source of pride and nachas to the entire family and to Klal Yisroel.