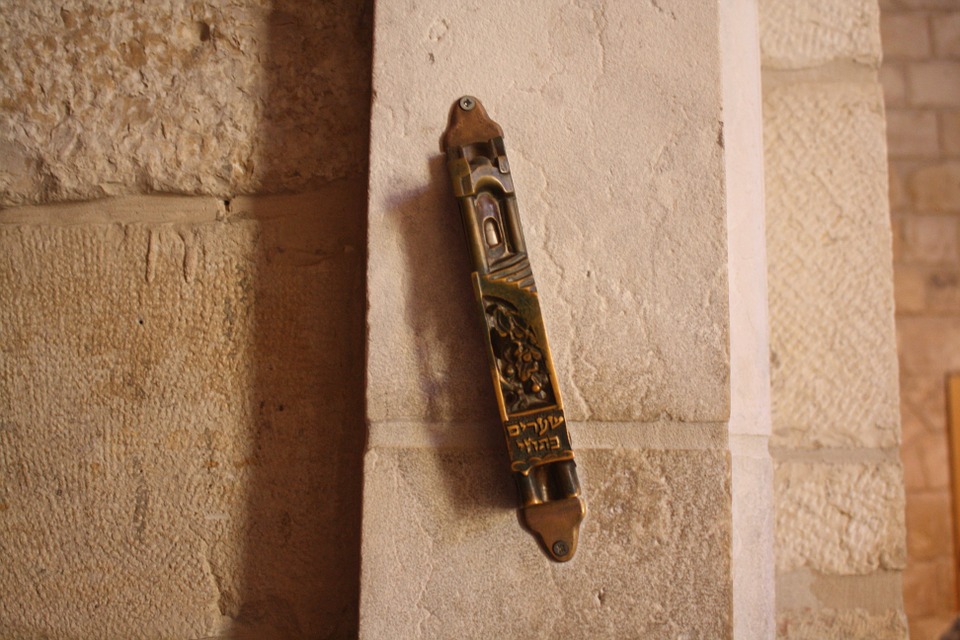 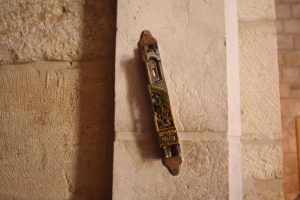 “And write them on the doorposts of your house and upon your gates” (6:9) Generally, a mitzva is defined by the object used to perform the mitzva, such as shofar, lulav, and tefillin. However, the word “mezuzah” means “doorpost”; the object itself has no defining name other than the post upon which it is placed. This would be comparable to referring to tefillin as “arm”. What is different about mezuzah?

The Talmud teaches that upon vacating a home, if a person knows that the next tenants will be Jewish, he is responsible to leave a mezuzah hanging on the door. The Talmud relates a story concerning an individual who ignored this responsibility and was punished with the loss of his family. 1 What is the severity of the transgression which resulted in such a tragic punishment?

When leaving the land of Moav, Naomi attempts to dissuade her daughter-in- law Ruth from embracing Judaism and accompanying her to Eretz Yisroel. Among the precepts she mentions that Ruth will be required to observe is the mitzva of mezuzah.2 Why is that an important mitzva to mention to a person who is interested in converting?

In the secular world, a person has a right to his privacy, and no authority can dictate to him what to do behind closed doors; man is king of his domain. The manner in which a person makes it be known that his house is under his control is by placing his name on either the door or doorpost. By placing a mezuzah on his doorpost, man is affixing Hashem’s name upon his home, thereby submitting to Hashem that He is the authority of this abode. Naomi understands that Ruth, coming from a society which entitles a person to complete control over his actions within his own home, needs to be warned that as a Jew this will not be the case.

Leaving a mezuzah behind when vacating a premises is an affirmation that this is Hashem’s home. A person who removes the mezuzah is denying Hashem’s control over his home. Therefore, the quid pro quo for this is that he loses his own home, i.e. his family.

The mezuzah functions to make a home “Hashem’s home”. Therefore, the object of the mitzva becomes the home, not the name affixed to it. Consequently, the mitzva is defined by the doorpost of the house.

The seventh commandment of the Decalogue, “lo sinaf” prohibits adultery. Included in the tenth commandment, “lo sachmod” is the prohibition against coveting a friend’s wife. It would appear that these two prohibitions duplicate one another. Why are they both included in the Ten Commandments? Although “lo sinaf” addresses the prohibition against adultery, the Torah does not explicitly state that it is referring to a married woman. Why, when discussing “lo sachmod” does the Torah emphasize the woman’s marital status?

The Mishna in Pirkei Avos records that Avraham Avinu successfully endured ten trials.1 The Torah reports that Sarah, Avraham’s wife was abducted on two occasions, the first time by Pharaoh, king of Egypt, and the second time by Avimelech the Philistine monarch.2 Rabbeinu Yonah registers both abductions separately in his enumeration of the ten trials. 3 The Ramban explains that the purpose of a trial is to afford a righteous individual the opportunity to actualize his potential.4 Once the individual successfully overcomes his trial, actualizing his potential, repetition of the trial is pointless. Why, then, is Sarah’s second abduction included in Avraham’s ten trials? The only possible solution is that the two different abductions served to develop different sensitivities. What is the difference between the two abductions?

As Avraham and Sarah approached the Egyptian border, Avraham told Sarah “Now I know that you are a beautiful woman. When the Egyptians see you, they will kill me in order to take you. Therefore, please tell them that you are my sister.”5 Rashi explains that the local populace was not graced with women of beauty, and Avraham was aware that the Egyptians’ lust for her would lead to his demise.6 The Torah attests to the fact that Avraham’s fears were not unfounded, as the verse records that upon their arrival in Egypt, the Egyptian officials saw Sarah’s beauty and lauded her for Pharaoh, after which she was abducted.7 In the verses which record Avimelech’s abduction of Sarah, we find no mention of her beauty being a factor which motivated the act. The Ran explains that this abduction, which occurred twenty-four years after the first one, was motivated by Avimelech’s desire to incorporate a member of Avraham’s family into his household.8 The verses make it clear that the Egyptian abduction was motivated by lust; Egyptians were notorious for their immorality. Avimelech’s abduction of Sarah was motivated by the need for domination and power. Avimelech was exercising his power as king to assert himself over Avraham by taking a member of his household for a wife.

The intended victim of the first abduction was Sarah. Avraham’s test was the manner in which he would react to losing the woman he loved. The intended victim of the second abduction was Avraham, over whom Avimelech was attempting to exert his power and control. This test presented Avraham with a completely different challenge than did the first abduction. The dynastic names of the monarchs reflect their motivations; the name “Pharaoh” is derived from “perah” or “paru’ah”, which means “naked” or “immoral”, while the name “Avimelech” means “father of power”.

The act of adultery can be motivated by two very different feelings; its motivation can be either lust, or the desire to exercise control over the married woman’s husband. The tenth commandment, “Do not covet” is emphasizing the prohibition against taking control of another person. Therefore, in this prohibition, the Torah lists those items to which a person senses the greatest connection: his wife, house, field and slave. The Torah emphasizes the coveted woman’s marital status, for that serves as the motivating factor, the assertion of control over his friend. The seventh commandment addresses the act of adultery motivated by lust. Therefore, although it refers to consorting with a married woman, the relationship between husband and wife is downplayed.