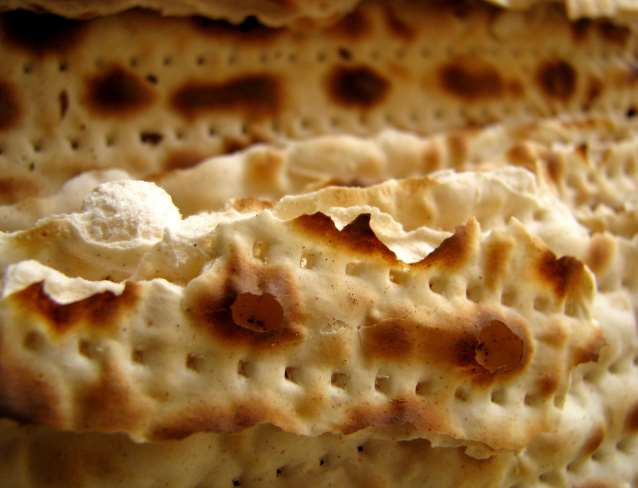 Matzah – How Much Must We Eat? 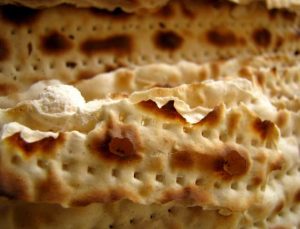 QUESTION: How much Matzah must one eat on seder night?

DISCUSSION: There is a Biblical commandment to eat matzah on the first night(1) of Pesach. The Talmud explains that “eat,” by definition, means to eat at least an amount equivalent to the size of an olive, a k’zayis. Men and women equally are obligated to perform this mitzvah. Boys and girls, too, once they are old enough to understand what the seder is all about, should be taught to eat a portion of matzah lishmah, “for the sake of the mitzvah,” as the Torah requires.

In the opinion of some authorities, the proper, l’chatchilah manner of eating the k’zayis of matzah is to chew the matzah thoroughly and swallow it entirely in one swallow.(2) Since, however, this is quite difficult to do,(3) one may take up to three(4) minutes(5) to eat the k’zayis. [An elderly person who is only able to chew slowly, children under the age of bar/bat mitzvah,(6) or anyone with a medical condition, can rely on the lenient views which allow for a time-span of up to nine minutes.]

It follows, therefore, that anyone who eats one k’zayis of matzah within the prescribed time satisfies his basic obligation. But while the basic mitzvah is easy to understand and fulfill, there is much discussion among the poskim concerning several technical details of how best to perform this important mitzvah. Some of the issues debated are: Should the k’zayis of matzah be broken off from the upper, whole matzah, or from the middle, broken matzah? Can two blessings – ha-motzi and al achilas matzah – be recited over one matzah,(7) or must we recite one blessing over one matzah and the other blessing over the other? If, indeed, the two blessings must be recited over two separate matzos, which blessing is said over which matzah?

In response to these and other concerns and in order to fulfill the mitzvah in the most l’chatchilah manner,(8) Shulchan Aruch advises that one eat two k’zayis portions, one from each matzah. But since we are unsure both which is the “real” k’zayis, and which blessing corresponds to which matzah, we recite both blessings over both pieces of matzah (the top and the middle one(9)), break them off together,(10) and eat a k’zayis from each one of them together.(11) [“Together” means inserting both k’zayis portions into one’s mouth and chewing them, and then swallowing one k’zayis at a time, if possible.] Thus one is actually eating two k’zaysim.

But it is essential to understand that eating a second k’zayis is not nearly as important as eating a first one. Clearly and unequivocally, one fulfills his basic obligation by eating any k’zayis of any matzah, regardless of which matzah or combination of matzos it is taken from. Bearing this in mind, the following points need to be clarified:

There are poskim who question this entire stringency(12) and require only one k’zayis to be eaten.(13) Even among the poskim who recommend that two portions be eaten, there are several who hold that only the person conducting the seder [or anyone breaking the matzos and reciting the blessings over them] must eat two portions. The other participants need to eat only one portion.(14) While many poskim seem to hold that everyone should eat two k’zaysim,(15) it is, according to all views, a stringency and a hiddur mitzvah, not a basic halachic obligation. Thus elderly or weak people, people who can only stomach a small amount of matzah, small children, and anyone else who finds eating matzah difficult, need not force themselves to eat more than one k’zayis of matzah. [The k’zayis should be a combination of the top and middle matzos.]

HOW MUCH IS A K’ZAYIS?

The amount of a k’zayis as it pertains to matzah has been extensively debated among the classic poskim and contemporary authorities. We will list briefly the points debated:

There are no clear-cut, definitive answers to these questions. While several poskim allow for the lesser amount, the view of the Mishnah Berurah is that when it comes to matters of Biblical law, such as the mitzvah of eating matzah, we ought to be stringent, following the principle of safek d’Orayisa l’chumra.(17) Thus it is proper to follow the more stringent measurements for the k’zayis.(18) [Sick, young and elderly people may rely on the lenient size of a k’zayis, which is about half of the standard amount.]

But as explained earlier, the Biblical obligation is to eat only one k’zayis. That one k’zayis should be reckoned according to the maximum standard, as it is a Biblical requirement. But the second k’zayis, the one that is eaten to satisfy the concern of the poskim regarding the technical details of the mitzvah, is not Biblically mandated. For that second k’zayis we can surely rely upon the smaller, more lenient size. Indeed, some poskim(19) maintain that one need eat only one large k’zayis to meet all requirements: The Biblical obligation will be met with the large k’zayis, the technical details obligation will also be satisfied with the one large k’zayis – since a large k’zayis can contain two small portions of k’zayis.

There are several methods for estimating the size of one large k’zayis: About two-thirds of a standard machine matzah; about 24 grams (0.8 oz.) of hand matzah;(20) about the space of a loosely extended palm (including the fingers and the thumb) of an average person.(21)

The above discussion applies to the matzah eaten at the end of the meal, the afikoman, as well. There, too, one k’zayis is required(22) while the second k’zayis is only recommended,(23) and anyone who finds it difficult to eat two portions should eat only one.(24) By eating one large k’zayis, one will surely meet all of his requirements.

GENERAL NOTE: Matzah that remains on the gums is counted towards the k’zayis, but whatever gets stuck between the teeth does not. Burned matzah, or matzah that is not actually ingested because it has fallen out of one’s mouth while eating, does not count towards the k’zayis either.

1 Outside of Eretz Yisrael, there is a Rabbinic obligation on the second night as well.

2 Mishnah Berurah 475:9 and 41, based on Magen Avraham and Shulchan Aruch Harav. But other poskim rule that this is not required; see Eliyahu Rabbah 475:2 and 12; Aruch ha-Shulchan 4, Dinim v’Hanhagos 17:34 quoting the custom of the Chazon Ish; Yechaveh Da’as 1:17.

3 Most people find this difficult to do – Moadim u’Zemanim 3:259 – especially if they use a large piece for a k’zayis.

4 Igros Moshe O.C. 4:41. Some poskim allow only two minutes while others allow up to four minutes. [If, mistakenly, one took longer than four minutes to eat his portion, he should eat another k’zayis, but without reciting the blessings.]

7 Based on the rule of ein osin mitzvos chavilos chavilos.

8 As the Chasam Sofer is quoted: This mitzvah (eating matzah on Pesach) is the only Biblical mitzvah of “eating” that has remained for us to fulfill in these times when the Beis ha-Mikdash is not standing… it is proper to fulfill it in a manner which satisfies all opinions l’chatchilah… (Vayaged Moshe).

9 When the first blessing – ha-motzi – is recited, all three matzos should be held so that lechem mishneh can be fulfilled.

10 Mishnah Berurah 475:3. Other poskim do not insist that they be broken together; see Shulchan Aruch Harav 475:5.

11 The two portions cannot be eaten separately, since we are unsure which is the “correct” one. Eating one before the other could create questions of hefsek between the “correct” blessing and the “correct” k’zayis.

12 See Beiur Halachah, who questions the basis for this practice and its authenticity.

13 Chazon Ish is quoted by several sources as ruling that there is no need to eat more than one k’zayis, and this was the custom of the Chazon Ish himself; see Orchos Rabbeinu 2:70.

18 On the second night of Pesach in the Diaspora, there is no requirement to be stringent and eat the larger amount; Harav S.Z. Auerbach (Yom Tov Sheini K’hilchaso 1, note 198).

20 It is difficult to estimate the size of a k’zayis of a hand matzah, since the matzos vary in size and in thickness. Generally, a little more than a quarter of an average matzah is a large k’zayis; Piskei Teshuvos 486:1.

21 Halailah Hazeh, pg. 19. The Chazon Ish and Harav Y.Y. Kanievsky measured the large k’zayis as the space of their loosely extended palm without the thumb; Orchos Rabbeinu 2:66.

22 According to most opinions, the obligation is Rabbinic in nature.

24 Shulchan Aruch Harav 477:3. Some poskim maintain that women and children are only obligated to eat one k’zayis for afikoman; see Seder ha-Aruch 97:8.