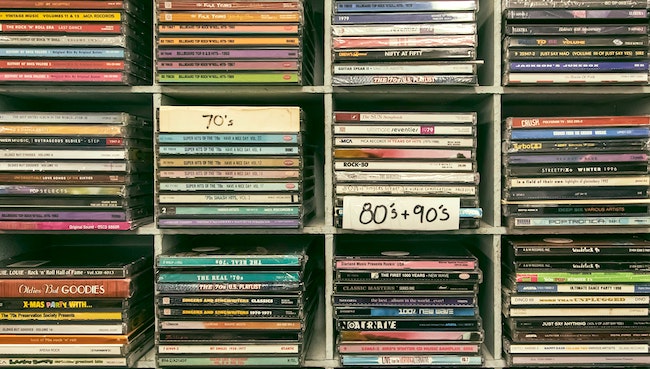 We discussed a similar question before, regarding reading magazines and newspapers at a newsstand. At that time I said that the company itself probably realizes that people come in who are not going to buy, but they nevertheless hope — and they’re probably right — that many of the people who think they’re not going to buy do in fact buy. So it would seem to be similar here, that you could go with your kids to listen, because it may very well be that your kids will say that they would like such and such a record, and you may agree that it is good for them to have it, and you will buy a record. However, if you are not certain that you can control your kids, and that they may cause a ruckus and pull CD’s off of shelves, then it really is a problem. It is a chillul Hashem. And you’re also risking damaging the store’s property. When a CD falls, generally a person will just return it to the shelf — without knowing whether or not the CD was broken. And you may be disturbing the other customers that shop at the store.

What if there is no damage, but the kids will cause a ruckus?

As I mentioned, there is a bit of a problem with this, because the store may lose customers who are disturbed by the atmosphere the kids are creating. . But it depends on the environment. A supermarket generally has lots of kids in carts, etc. It is possible that many types of stores expect that the people who buy the most are the ones with big families, so it is acceptable to them that big families will come and fill up their shopping carts, and so they’re not that unhappy about it. That is also a factor. Generally a music store would be less accepting of this situation.

How about a clothing store, where there would be more potential for damage of something worth $40 or $50?

There you have to be extremely careful. Children must be trained not to damage someone else’s property. This is very important, that a child should be taught not to touch someone else’s belongings, and if this is taught well, then the child will grow up to have a sense of honesty and responsibility. Children who don’t learn this lesson when they are young often do not learn it later either, and they can cause problems for the community.

When I was a youngster, some kids used to take out a penknife and scratch their names into the desk. Then a teacher who had a lot of experience and classroom presence saw one boy scratching his name into the desk. The teacher called out with a strong voice, “Mr. Goldberg,” or whatever the child’s name was, “is your father very rich?” The kid was taken aback. The teacher said, “I’ll explain to you why I’m asking the question. Does he have enough money to pay for all the damage that you’re doing to those desks over here? Because he’s going to have to pay for it, you know.” The kid stopped. And after that no one touched the desks.

How about running up and down the aisles?

It depends on the atmosphere of the store. If it’s a store that is peaceful and quiet, no. If it’s a supermarket where running up and down the aisle is common, then the only concern is that the kids don’t touch anything. Some mothers, on the other hand, are too excessive in their discipline.

What about magazines that are at the checkout aisle in the supermarket? Is it acceptable to look at these magazines, even if there is no intention to buy?

What was said previously applies here. Although a person has no intention of buying it, what’s in these magazines stirs up his interest and eventually the shelves are emptied of the magazines.

So what’s the answer?

According to the letter of the law, one can look. But be careful. In many of these magazines there are things that a Jew shouldn’t be looking at, in which case, from a different perspective, he shouldn’t look at them at all.

NEXT WEEK’S QUESTION 53: USING AN IRA TO PAY DEBTS

Let’s say a person owes money to a variety of places (Yeshiva, the person who takes care of the lawn, etc), and it is very difficult to pay these loans from one’s salary. Also let’s say the person has an IRA (Individual Retirement Account) that has been reserved for one’s retirement. Taking money from the IRA incurs certain penalties, in addition to losing the considerable benefit of the money accruing tax-free until retirement. To what extent is the person obligated to take money from the IRA to pay off his debts? To take the question further, would a person be obligated to take out a second mortgage on one’s home to pay debts? What if a person’s investments (in stocks or real estate) are very illiquid, and currently at a depressed value, would he be obligated to liquidate the investments at a loss to pay such debts?

« Suit for Dry Cleaner
Using an IRA to Pay Debts »