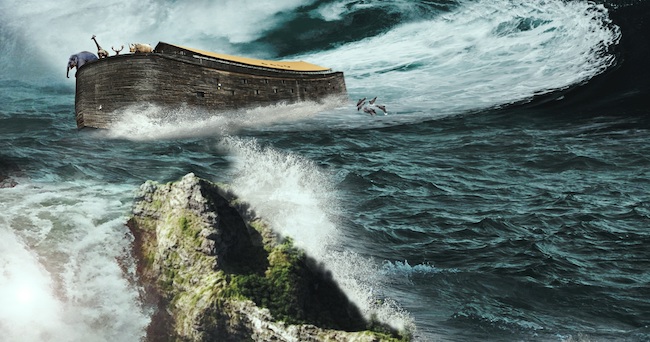 A week passed, and the waters of the Deluge flooded the land. (Bereshith 7:10)

We know that the entire earth was flooded and its inhabitants killed because of the unprecedented level of corruption which had engulfed society in those days. In the piyut Yom l’Yabasha (which is commonly recited after a brith milah), we say, “Because of her deceitfulness You caused the Anamite daughter’s feet to fall.” “Anamite’s daughter” is a nickname for the Egyptians, who were descendants of Anamim.(1) Since throughout their time in Egypt the Jewish people were dealt with crookedly, God used water to punish the Egyptians, just like the generation of Noach.

Drowning is not the only suffering we can avoid by speaking only the truth. Through truth we will be spared from all evil.(2) Our Sages have told us that truth is inextricably bound with life, and that one who clings to truth will see the rewards in his life. Rav Yaakov Kamenetsky attributed his long life to the fact that he was careful never to lie. All the good fortune we gain through truth will extend to our families, who will also be spared from problems.(3)

In the same vein, the Gemara says that Rav Tovyomi was extremely careful never to lie. He settled in Kushta (which means “truth” in Aramaic), a city in which no one ever lied, and therefore, none of its inhabitants ever died. He married a woman from Kushta, who bore him two children. One day a neighbor asked about his wife’s welfare. Since she was washing her hair, for the sake of modesty he answered that she was not home. Immediately both his children died, and the residents of Kushta promptly banished him from the city.(4)

It is generally permitted to deviate from factual integrity for the sake of modesty; nevertheless, because of the tremendously high level of honesty in that city, Rav Tovyomi received an extremely harsh punishment. (5)

After Adam’s transgression, death was decreed upon the world; how could there be a place where nobody died? We may conclude that the inhabitants of this city had rectified the sin of Adam, and therefore they were no longer vulnerable to death. If so, it was not appropriate for Rav Tovyomi to act as he did, for before Adam’s transgression the evil inclination did not control man’s physical desires, and the regulations regarding modesty were entirely different.(6)

« The Purpose of Falsehood II
What’s Yours is Yours »