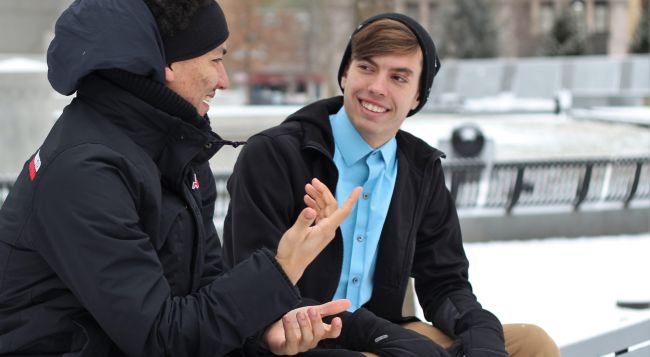 “A person should always accustom himself to keeping silent (lit., ‘should increase his silence’). He should speak only of matters of wisdom or matters pertaining to his living needs. It was said regarding [the Talmudic scholar] Rav, the student of our holy teacher [R. Yehuda haNasi], that he never engaged in idle chatter his entire life. This, however, is the speech of most people. One should even limit his words when discussing matters pertaining to one’s living needs. Regarding this the Sages commanded us, saying: ‘Whoever talks excessively brings about sin’ (Pirkei Avos 1:17). And they said, ‘I have not found anything better for oneself (lit., ‘better for one’s body’) than silence.’ (ibid.)”

In this law, the Rambam discusses the importance of silence. One should limit his speech to words of wisdom and matters relevant to his living needs, such as his livelihood. Empty speech and gossip should be avoided to every extent possible. Even speech regarding one’s living needs should be kept to a minimum.

The reason for this is clear. Empty, unproductive speech is at the very best a big waste of time. And much more likely, it will degenerate into gossip, slander, ridiculing, scoffing, and cynicism. As the Rambam, quoted from Pirkei Avos, “Whoever talks excessively brings about sin.” There is nothing to be gained and everything to be lost from wasteful speech.

Before I move on, I should draw attention to our discussion on the mishna in Pirkei Avos cited above (see the above link to that class). Over there we discussed at length the different types of speech and their relative worth. (The Rambam himself, in his commentary to that mishna, dividing speech into five separate categories.) We even suggested how and where “empty” speech is not so empty — in fact is often what friendships are built on. I suppose I could “cheat” over here and fill out this class by rehashing the same discussion. But in the spirit of the Rambam, I’ll clam up. Besides, I have a lot more to say about silence. (?) I’ll only briefly touch on some of the points we made earlier, and then I’ll move on to a different thought.

As we discussed in Pirkei Avos, speech is a uniquely human trait. Genesis 2:7 states: “And the L-rd G-d formed man, dirt from the earth; He blew into his nostrils a living soul, and the man became a living being.” Onkelos, a scholar of the period of the Mishna, in his Aramaic translation of Scripture, translates “a living being” as “a speaking being.” Speech is thus the defining characteristic of our humanity.

To this we posed a question, one raised by my teacher R. Yochanan Zweig. What is so unique about man’s ability to speak? Many animals communicate with each other as well, often in rather complex ways. In fact the Midrash states that King Solomon understood the languages of all the animals (see I Kings 5:13). If so, how can we consider speech a uniquely human trait?

The answer is that there are two types of speech. Animals communicate but their speech is entirely physical. Their “topics of conversation” are basically limited to attracting a mate, staking out territory, telling their friends where you just started your picnic, etc. Speech for them is an expression of their bodies.

Man, however, was granted speech on an entirely higher plane. We express our souls. Our speech enables us to articulate our feelings and emotions, to express and to discover who we are. We put to word ideas of the spirit. And in so doing, we bring to life entire concepts which would otherwise be dormant, inchoate and undeveloped. If not for speech, the yearnings of our spirit, so many of our moods and emotions would never find expression — and so would never really come to be. Without speech we would only possess the vaguest awareness of the abstract world of ideas and human emotions, and most of man’s potential for spiritual and intellectual endeavor would whither.

Speech is thus man’s vehicle of expressing his soul, and this is why the Sages were so against its misuse. Speech’s very great potential makes its misuse all the more tragic. Yet, most of the speech man utters is a pathetic waste at best — about sports, gossip, pop culture, etc. (This is perhaps why the Rambam adds the remark above — “This, however, is the speech of most people.” It wasn’t really necessary for him to write this in a work on Jewish law. It was almost as if the Rambam, one of the most crisp and concise writers Israel has ever known, allowed a disappointed sigh to emerge in his writing. What a tragic waste of all that makes man precious!)

And thus, the Sages tell us to never misuse our divine ability to speak. It’s not only a matter of the wasted words. It is a taking the very tool G-d granted us to express our souls and using it to express our bodies — our physical wants and animal drives. And such is just a tragic degradation of something so precious and sacred. (All of this is not to mention using our speech to insult and malign — using the very power of our souls to destroy rather than build. This is incidentally why the Sages take curses and insults so seriously. We’re playing with a very real and a very dangerous force.) Speech is a gift from above. And as all divine gifts, it is merely entrusted to us — to be used in the manner G-d intended. We must make good G-d’s investment.

I would now like to bring out a further angle to this discussion. So far we have said that since speech is such a precious commodity we should not waste our worlds or sell them short of their potential. I think, at the same time, it’s important to recognize that silence is more than just a lack of wasteful speech. It itself engenders some very positive qualities. G-d willing we will develop this idea next week.